It's mid-afternoon on a recent Friday — Friday the 13th, in fact — and things are already getting pretty spooky as Black Fast guitarist/vocalist Aaron Akin steps into a "mean-looking alley" in Buffalo, New York, for a telephone interview with a reporter.

"There's a rusted-out machine with teeth on the front of it, and I don't know what it does," Akin, 29, says, surveying his surroundings. "And there's also an empty wheelchair, which is disconcerting. There's a few things happening here, old TV sets. We should make this quick."

Akin and his bandmates — guitarist Trevor Johanson, bassist Ryan Thompson and drummer Ross Burnett — are in Buffalo to perform with the venerated Cleveland metallic hardcore act Ringworm for the first of several shows the two bands will play on tour together. In the weeks prior the St. Louis-based band has been criss-crossing the country with like-minded thrash metal acts Exmortus and Hatchet. Since signing to eOne Music (home of top-tier metal acts including High on Fire, Overkill and Crowbar), the group has gotten used to living on the road.

All that work is paying dividends. Black Fast has by now amassed a dedicated following of metalheads across the U.S. Recent nods from international outlets such as the UK-based rock magazine Kerrang! and Canada's Exclaim! make clear that there's hunger for the group's music outside the States as well.

"When we did the last record we were on tour pretty much for a year, almost," Akin says. "And then that's what's gonna happen this time too. The next year and a half will probably be like 60/40 or maybe even more on the road."

When he says "this time," Akin is referring to the release of the band's latest album, Spectre of Ruin. This year, Friday the 13th isn't just special because it is the favored day for hockey-mask-wearing murderers to chop up summer camp attendees with machetes — the July date also marks the official release of the new album. 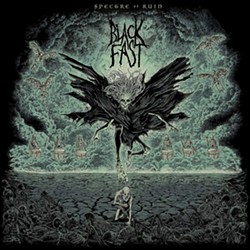 Much like the band's first album for eOne, 2015's Terms of Surrender, this one was recorded at the Florida-based Mana Recording Studios with respected metal producer Erik Rutan. Known as the guitarist and vocalist for Hate Eternal, Rutan has credentials that even include playing with Morbid Angel. The album is a cacophonous affair forged out of thunder and sharpened by lightning, an offering of blackened, technical thrash metal served up in as evil a manner as humanly possible.

It's kind of funny, then, that such a badass piece of malevolent darkness was recorded in bucolic St. Petersburg, Florida. Band members stayed in a motel on the beach for twenty days in December during its production.

"We're literally across the street from one of the nicest beaches in America, and it's paradise," Akin says. "And so externally everything is beautiful, and internally you're just raging with stress and anticipation and fear and all of the things that go through your mind when you're making a record for three weeks."

Their neighbors were mostly older folks from colder climates wintering in Florida.

"It's on the beach and it's full of snowbirds," he explains with a laugh. "So we hang out with old Canadian people, and they're all very sweet and make fun of us when we leave — we'd leave every day at noon to go record, and we'd get home at one or two in the morning. They're long days. And they're just sitting out there sunbathing, drinking beers, like, 'Have a good day at work, boys.' And we're like, 'Fuck you guys.'"

The album had been in the works for some time. Akin says the band started writing more or less right after Terms of Surrender was released, accumulating riffs until they got a deadline to record.

"You know, you get about 50 percent of it written and then you're just like, 'Alright, we just need to book the studio and we'll just finish it,'" he says. "And that's pretty much what happened. Maybe a couple of weeks before we went there we were just like, 'Here's the last two songs.' And those two songs turned out to be two of my favorite, which is kinda funny."

Akin, who writes all the lyrics, says the album looks at the superstitions and supernatural beliefs of different cultures from around the globe — the omens and entities used to ascribe meaning to the random chaos of life and death — and ties them all together into one grand, unifying evil entity, the titular "spectre of ruin." It's heavy stuff, befitting Akin's thoroughly evil, scorched-earth vocal approach.

Yet even those lyrics and themes were written near the beach.

"The lyrics to the songs, the song titles, even the album title, none of it's really done," he says of the band's initial arrival to the studio. "So there's just one more layer of 'holy shit I'm freaking out.' And that's why I sound like I do, probably, because I'm actually terrified the whole time.

"That's my process, I guess," he adds, "is to kinda fuck myself over."

Black Fast's touring schedule will see the band return to its hometown for a show celebrating Spectre of Ruin's release at Fubar on Friday, August 17, with locals Dracla and Thor Axe, after which the band will get a short breather before heading back on the road.

Not every city may boast alleys as creepy as the one in Buffalo, but when asked to tell his favorite tour story, Akin relays a tale that is as terrifying as any mysteriously empty wheelchair could ever be.

"Best tour story? Maybe Ryan breaking his foot and then Trevor peeing into his cast, and then the cast being too tight, and then the soggy moisture of the urine and the sweat from us traveling around the country nearly making him lose his foot," he says. "Maybe that. That's up there for sure."

Eat your heart out, Jason Voorhees.