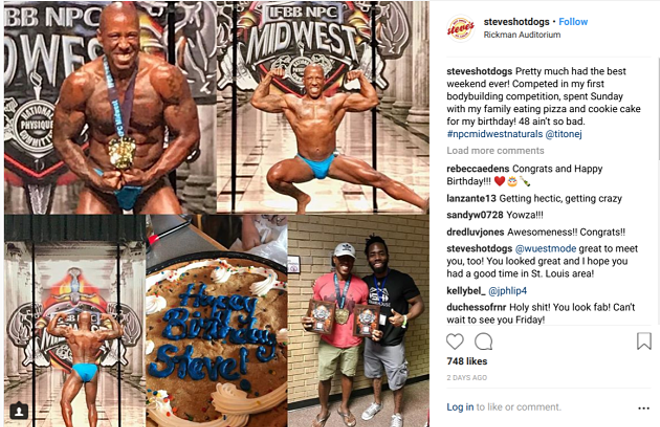 Steve Ewing — who as the singer of beloved local band the Urge and the eponymous purveyor of Steve's Hot Dogs' delicious tube-shaped meats was already a local legend — is now looking buff and swoll as fuck as well, leaving the rest of us sad sacks absolutely no chance of ever measuring up.

Ewing marked his 48th birthday this past weekend by participating in a bodybuilding competition, the 2018 NPC Midwest Naturals, on Saturday, ultimately winning first place in two of the novice masters classes and second in the overall masters.

“Pretty much had the best weekend ever!" Ewing writes in an Instagram post. "Competed in my first bodybuilding competition, spent Sunday with my family eating pizza and cookie cake for my birthday! 48 ain’t so bad.”

Pretty much had the best weekend ever! Competed in my first bodybuilding competition, spent Sunday with my family eating pizza and cookie cake for my birthday! 48 ain’t so bad. #npcmidwestnaturals @titonej

Ewing's preparation for the event, we're assuming, involved a diet consisting entirely of hot dogs and a training regimen in which he jumped right in and then back out of a lot of things (tires, hula hoops, probably a jump-rope made of strung sausages, shit like that). All that work paid off, clearly, as the man can now quite obviously lift cars up over his head and leap over buildings.

As the most yakked frontman of any current St. Louis band, Ewing now stands at the top of the mountain, flexing hard on all those who might dare challenge. At the time of publication, the RFT has begun recklessly spreading unconfirmed rumors that Foxing vocalist Conor Murphy, fresh off the wild critical success of the band's latest, Nearer My God, has begun his own intense training program in the hope of claiming the title of "Swollest Rock Band Singer in St. Louis" from the Urge frontman.

Good luck to you, Conor. You come at the Ewing, you best not miss.