Years After Jimmy Tebeau's Land Was Seized, He's Playing a Show On It 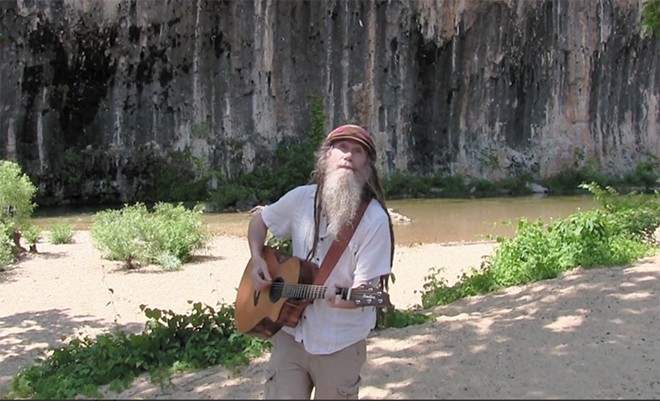 It was in March 2004, as Jimmy Tebeau recalls it, that he and his family moved to Shannon County, Missouri, taking over a “failing church camp” that would soon become the base of operations for his Grateful Dead cover band, the Schwag. By May of that same year, the group’s Schwagstock festival had moved to the camp, and for the next seven seasons, tens of thousands of concertgoers attended shows on the wooded grounds of Camp Zoe. From the Deadhead weekends to raves to Marshall Tucker-headlined biker rallies, the place drew a crowd, many crowds — and, eventually, the notice of authorities. In November 2010 federal charges were leveled against Tebeau, with prosecutors alleging rampant drug sales taking place during events at the campground.

He and his family would move from their converted schoolhouse home at Camp Zoe in 2012, and by early 2013, the Schwag would be put on hiatus while Tebeau served a prison sentence (originally sentenced to three years, the feds let him out early, in 2014, for good behavior). Since his release, the group’s played a steady diet of shows, with a heavy emphasis on weekend tours around the Midwest as well as festival dates on various campgrounds around Missouri, Illinois and Arkansas.

In June, Tebeau even visited the Camp Zoe site for the first time since his incarceration. After being seized by authorities, the site is now Echo Bluff State Park, a 430-acre park run by the state of Missouri. The visit came on a whim. He surprised even some of his closest friends and associates, who assumed he’d never return.

Tebeau, who now operates out of an expansive office/studio in a south-city storage warehouse, is philosophical about his return to the site. “What am I going to do? Spend my whole life being pissed off?” he asks. “It is what it is, and you make the best of what time you’ve got.”

Maybe that’s why Tebeau, 50, believes that the best way to spend his time this summer is to give a show at the state park he once owned.

A $52 million overhaul has added numerous amenities. And yet, on his visit, Tebeau found himself drawn to a creek that looked just as it did when he lived there. With a camera in tow, he recorded a solo version of the Dead chestnut “Ripple.” Posted online, his video received thousands of views.

On Tebeau’s second visit to the site, he simply walked into the park’s offices and asked about playing a gig at the new amphitheater. As it turns out, folks within the park system had independently considered the same idea. And so, on August 18, Tebeau will play a show at his former home, in a structure he couldn’t have envisioned when pulling up stakes six years ago.

In actuality, he’s impressed by what he’s found there.

“The people running it now had nothing to do with my prosecution,” he says. “They’re ambassadors of the land, saying, ‘Here it is, come and enjoy it.’ There are 27 cabins and private rooms, space for 50 RVs. Every weekend they fill the park, so you still have a couple hundred people on the grounds every weekend throughout the summer. By the time I booked this show, I couldn’t get a room for myself. They’ve built a huge lodge, with a big back porch that looks out over the bluff. It’s got a restaurant and general store that’s busy even during the winter. They’ve put in a bridge that goes over the creek; that must have cost a million just by itself. Even if you don’t stay, it’s free; you can just go through and enjoy yourself.”

For his gig on the 18th, Tebeau figures he’ll be doing some of that himself, “doing some swimming with the kids” before taking the stage for what he says will be a three-hour show. The Dead’s catalog, of course, will provide a big chunk of the material, but he also plans on adding a storytelling component, during which he’ll pause to reflect on different memories of the place, of which he’s got a few. Among those getting a history lesson will be Tebeau’s youngest kids, who haven’t been on site since 2012 and don’t remember much of it.

“It’s cool that they’ve been so receptive to having us down there, since there are a lot of people who loved that land, with all of our experiences there,” Tebeau says of the new stewards. “We generated so much solid musical energy in that valley for seven seasons. We rocked out to about 5,000 people every six weeks. The people running the land now want anyone to feel welcome there and think that my playing will help bridge the gap” to the old visitors.

Ever the concert promoter, Tebeau’s found out that the venue holds 150, but figures that he can shoehorn in around 300 for the performance. That said, he has no idea whether a small crowd or a large one will show up for the gig.

“There’s been a lot of support to the idea and only a little bit of negative, from the people who say they’ll never go down there again,” he explains.

Tebeau himself was “on the fence” about that kind of boycott for a good, long while. But the response generated by the spontaneous “Ripple” video gave him a better vibe, which was then augmented by the enthusiasm he felt from the state parks system. He says that even folks in Jefferson City were advocating for such a show once the video began to circulate, so the idea quickly came to fruition.

In a funny twist, Tebeau, who as the booking agent and promoter of his own act is well known for counting the nickels and dimes of his business, might be looking at a $100 stage fee for the day’s performance. Considering the costs already associated with the property in his lifetime, it’s not something that’s causing stress.

“They’re definitely not paying me to play,” he says. “And I’ll pay them if that’s what it takes. I think it’ll be neat to play there and maybe some friends will wanna come down, too.”