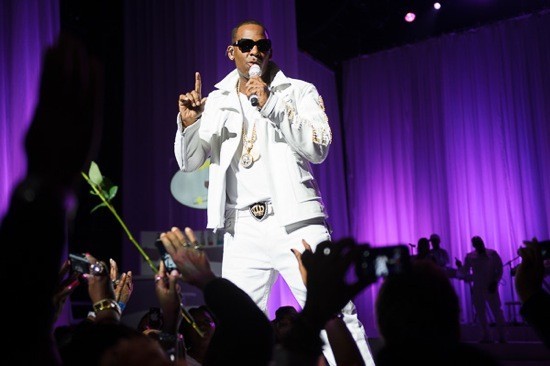 R. Kelly, an accused child molester and alleged sex cult operator who somehow also finds time to sing on occasion, is coming to the St. Louis area. He'll probably play the remix to "Ignition" — what a great song! Regardless, we should definitely run him right the fuck out of town.

The show, which was announced earlier this week, is slated for August 17 at the Family Arena in St. Charles. Despite the venue's name, you should under no circumstances bring your family there, because there is a decent chance he will try to (allegedly!) molest your children.

-In 1994, 27-year-old R. Kelly (real name: Robert Kelly) married 15-year-old Aaliyah, whose age was falsified on a marriage license. This is after Kelly wrote and produced the young singer's debut album, the conspicuously titled Age Ain't Nothing but a Number. When the marriage was annulled just months later, Kelly's lawyers included clauses in a settlement saying that Aaliyah could not pursue legal action for “emotional distress caused by any aspect of her business or personal relationship with Robert” or for “physical injury or emotional pain and suffering arising from any assault or battery perpetrated by Robert against her person.” Which seems, uh, troubling.

-In 1995, Kelly reportedly started a sexual relationship with a seventeen-year-old girl named Lizzette Martinez. Martinez alleges he was physically abusive and would pressure her into performing sex acts against her will.

-In 1996 a woman named Tiffany Hawkin filed a lawsuit against Kelly alleging he had a sexual relationship with her when she was only 15 and he was 24. She says he pushed her into having group sex with him and other young girls. The suit was settled for $250,000.

-In January 2001 Chicago Sun-Times journalist Jim DeRogatis was anonymously sent a videotape that appeared to show Kelly having sex with an underage girl. DeRogatis gave the tape to police, who were unable to take action because they could not identify the girl.

-In August 2001 A former intern at Atlantic Records named Tracy Sampson filed a lawsuit against Kelly claiming he started a sexual relationship with her when she was only seventeen. She claimed in court filings that Kelly coerced her into receiving oral sex from another girl, with whom Sampson did not want to have sex. She says Kelly tried to control every aspect of her life including who she could see and where she could go. That suit was settled out of court for an undisclosed sum.

-In February 2002 a videotape purportedly showing Kelly engaging in sex acts with a fourteen-year-old girl, including urinating on her while telling her to call him "daddy," was sent anonymously to the Chicago police. Kelly was subsequently indicted on 21 counts of child pornography.

-In April 2002, a woman named Patrice Jones filed a lawsuit claiming that Kelly impregnated her when she was only sixteen years old, and then coerced her into having an abortion. The suit was settled out of court for an unknown sum.

-In May 2002, a woman named Montina Woods filed a lawsuit claiming Kelly taped the two having sex without her knowledge or permission. The suit was settled out of court for an unknown sum.

-In 2005, Kelly's second wife, Andrea Lee, filed a restraining order against the singer alleging physical abuse, stalking and harassment. She claimed in her petition that he pinned her down and hit her repeatedly when she asked him for a divorce.

-In 2008, some five years after the pee tape surfaced, Kelly was found not guilty on all charges. Despite fifteen witnesses for the prosecution identifying the girl in the tape, the jury said they could not be sure of her identity, and therefore could not determine whether she was underage.

-In July 2017, after years of relative quiet on the R.-Kelly-is-a-monster front, Buzzfeed broke a bombshell story alleging that Kelly has been holding young women in various compounds across the country in what has been described as a sex cult, controlling their actions down to making them ask his permission before using the bathroom. It further alleges that Kelly pressures them into group sex and beats them when they disobey him.

-In August 2017, a woman named Jerhonda Pace came forward and backed up the sex cult story, saying she was in a relationship with Kelly in 2009 when she was only sixteen. She says he isolated and abused her in the same manner as those mentioned in the Buzzfeed report. She sued Kelly for damages when their relationship was over, and says the matter was settled out of court after she signed a non-disclosure agreement.

-In October 2017 a second woman, named Kitti Jones, also came forward to confirm the sex cult story, claiming Kelly convinced her to quit her job and move in with him, after which he became controlling and abusive.

-In April 2018 an unnamed woman filed a criminal complaint against Kelly claiming she spent eight months in a relationship with the singer when she was nineteen. She alleges he was grooming her to join his sex cult; she further says that Kelly intentionally infected her with an STD.

....But "Ignition," right? And Trapped in the Closet! Whoosh, all is forgiven.

Kelly, who through it all continues to refer to himself by the deeply unsettling nickname "the Pied Piper of R&B" (despite seemingly having no idea what that even means), has denied all of the accusations.

In the era of #MeToo and #TimesUp, it seems more than a little baffling that Kelly remains beloved by fans and is still able to get booked at large venues such as the Family Arena. And that's not for lack of effort by those who would like to see him sidelined: Poor Jim DeRogatis has been diligently banging his head against this particular wall for decades now to no avail.

Even rapper Vince Staples recently voiced his thoughts on the matter, derailing what should have been a straight-forward Coachella-produced puff piece to light into the singer with an expletive-riddled diatribe that should have Hannibal Buress-ed Kelly's Bill Cosby.

We'll leave you with his take:


You don't go to prison if you're a black entertainer. Only if you're a black gangster rapper. I'm changing my whole path. Think about it: R. Kelly never went to jail, and he’s a fucking child molester. He’s a child molester and he pees on people and he can’t read and write, and he didn’t go to jail. I’m a good person — R. Kelly’s a piece of fucking shit. So if piece of fucking shit R. Kelly didn’t go to jail for being a child molester and peeing on people and having a human trafficking ring in Atlanta, then I’ll be all right.


If you do decide to go to the show, maybe bring pitchforks. Definitely leave your kids at home.