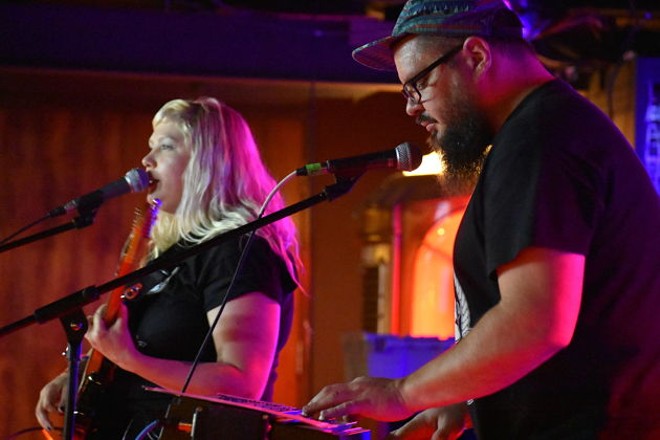 It's a rainy Friday night in the Loop, and a crowd has gathered at Blueberry Hill's Duck Room for the release of local pop-punk band the Haddonfields' new EP, When Cowboys Cry. But before that, at 9:30 p.m., garage-rock duo Bruiser Queen is playing a stripped-down set. Drummer Jason Potter eschews his usual place behind the drums, instead manning the keyboard and a tambourine. Guitarist/singer Morgan Nusbaum's bright, soulful voice fills the hall as she belts out the band's songs.

Watching her, you'd have no idea Nusbaum was creamed by a car while attempting to navigate a crosswalk just two days before.

Considering the violence her body endured barely 48 hours before, no one could have faulted Nusbaum for canceling.

On Wednesday, Nusbaum, who works at Steve's Hot Dogs on the Hill, missed the 1:20 p.m. bus after her shift. Opting to eat lunch in Tower Grove Park while waiting for the 2 p.m. bus, she approached a crossing she's used many times before.

"I was walking down Kingshighway and I was crossing at Magnolia there — it's a quieter crosswalk than the one at Arsenal, so I usually take that one," she tells RFT. "I just pushed the button and waited for the walk signal — it took forever — and I could tell that there was a lot of people waiting to turn left.

"So it turns to 'walk' and I start gunning it, I start running," she continues. "And next thing I know this blue car comes out of nowhere and just scoops me up. I hit the windshield, rolled over the car and landed flat on my back. Which is probably what fractured my ribs."

The car, which had been traveling west on Magnolia before turning south onto Kingshighway, stopped, and Morgan shouted to its driver for help. The woman promptly called 911. A group of bystanders were soon on hand, collecting Nusbaum's belongings — sunglasses, cell phone and more — which had been scattered across the intersection. Nusbaum credits the fact that she wasn't knocked clean out of her shoes to her Doc Martens, which were laced tight. A med student came and held her hand while she lay on the ground, waiting for help.

Soon, paramedics loaded Nusbaum onto a stretcher and into an ambulance, headed to nearby Barnes Jewish Hospital. All told, she suffered three fractured ribs and a gash on her head that required stitches, in addition to enough bumps and scrapes to give new meaning to the "Bruiser Queen" moniker.

"I've never been in an ambulance before, so that was really crazy," she says. "I had to stay the night in the hospital, because with rib fractures people tend to not breathe as deeply, which can cause your lungs to collapse a little bit and cause pneumonia."

Nusbaum was released from the hospital a day later, around 3 p.m. After only one night of rest at home she was already scheduling practice and trying to work out whether she'd be able to play the show her band had on the books.

Though it might seem crazy to some, she had sound logic behind her decision to go on with the show.

"And what better place to do that than with all my friends, you know?"

As the duo finishes an abbreviated five-song set, the crowd shouts cheers of encouragement, some with cell phones raised, recording the impressive show-must-go-onsmanship on display.

And as Nusbaum thanks everyone for their support, it is clear that the singer is right where she wants to be.

[Editor's note: An earlier version of this story incorrectly stated that Nusbaum was headed to Forest Park at the time of the accident, not Tower Grove Park. We regret the error.]