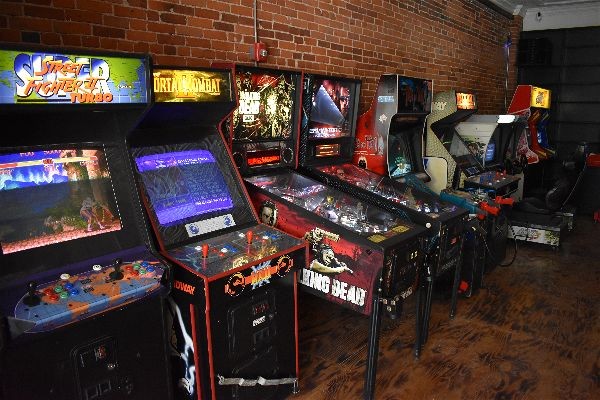 Blank Space is changing its game up.

The Cherokee Street spot that first opened its doors as an open-ended art space has, after six years, assumed a new identity: the home of RKDE (2847 Cherokee Street, 314-300-8831), the arcade bar previously located on the second floor of 2720 Cherokee Performing Arts Center.

Razani, who is also a co-owner of 2720, explains that he and his partners were finally able to buy the building at Blank Space outright about two months ago.

"So we own the joint," he says. "We purchased it in conjunction with an investor a few years back, but unfortunately that relationship soured, so we bought the building outright two months ago."

Since then the Cherokee Street storefront has been completely remodeled, with a gorgeous hardwood floor and a bar made from cedar sourced from Such and Such Farm in De Soto. Always Hard Concrete and Construction, run by Bryan Bedwell and Johan Sebastien Dudré (the former a founding member of KHVT, the local nonprofit that has constructed multiple skate parks in the St. Louis area), handled all the work, even cutting down the trees at the farm themselves.

If you're standing in the front doorway of the first floor and facing in, you'll see the newly constructed bar to the right. Lining the walls are arcade consoles including Street Fighter II, Mortal Kombat II, Walking Dead pinball, the Simpsons, NBA Jam, Time Crisis II, Galaga, Tetris and Ms. Pac-Man. To the left you'll see a bookcase where you might swear there was once a doorway to the basement; Razani is cagey about his potential future plans for that portion of the building, but the word "speakeasy" comes up more than once.

Up on the second floor is a second pool table and a handful of imported Japanese Sega Blast City cabinets. A portion of this space will be set up similar to a living room and will host weekly Nintendo 64 tournaments; Razani says they will use a projector for those at first, but he hopes to get his hands on a large flatscreen TV down the line.

The shuffle comes as an indirect response to Razani and his partners grabbing the reins of 2720 in April 2016.

"We were interested in bringing on a managing partner to run Blank Space as it was before, but we realized it might be way more fun and timely and cost-effective and good for the street to just move the arcade down the street," Razani says. "Given the architecture of 2720, the arcade was never really able to flower on its own. It was only really ever open five hours a week on Wednesday nights."

Though he says it will still host live music, implicit in the new plans for Blank Space is a loss of its identity as an open-ended, untouched canvas that allows the community to determine its purpose.

Interestingly, though, that aspect of Razani's empire seems to be just moving down the street to the second floor of 2720. Essentially, they've simply swapped.

"The one thing that we lost in moving the arcade to Blank Space is the ability to do art shows and gallery openings and that kind of thing," Razani says. "So we're gonna focus a lot of the second floor at 2720 on those things. Being more intentional about running an art gallery up there. We're gonna do a lot of smaller concerts that don't necessarily fit the main stage, so a lot of the programming that we have been doing up there is gonna stay, and then we're gonna build a really nice bar setup up there that we never really did get to, and do a lot of private events.

"The irony is, in a lot of ways, the second floor of 2720 is gonna embody a lot of the concept of what Blank Space was, in the sense that it's a space that you can do a lot more in," he continues. "It's not boxed in by the capacity of it; it's not boxed in by the fact that there's a bar over here, a stage over here. I mean, those things are there, but it's a lot more open space." 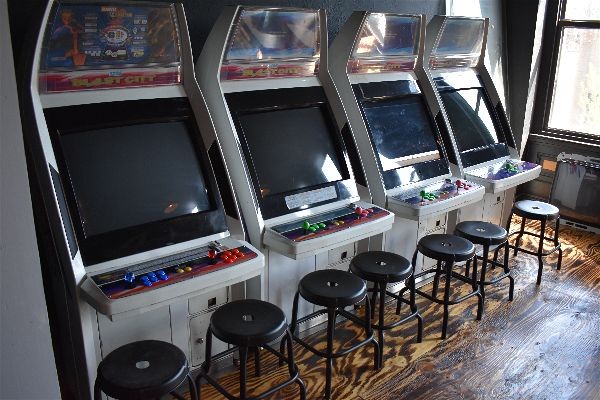 It's all part of a bid to keep Blank Space open seven days a week — a longstanding goal for Razani that had been difficult to achieve because most people thought of the spot as simply an event space. Bringing the arcade there, it seems, is the game-changer.

"I think what Blank Space always strived to be was an accessible space for people of all walks of life, from all different classes, socioeconomic backgrounds, that kind of thing," Razani explains. "What we've been striving to be for six years is that kind of space. But what we also don't think about in terms of accessibility is literal accessibility — like, 'When are you open, when can I get there, when can I hang out.'

"Moving the arcade there kind of gives us the perfect impetus to be open seven days a week as a whole new business — with the same values, with the same ownership, with the same ethos about our place on the street. And just giving us a good reason to be open every day."

RKDE x Blank Space will hold its grand opening Friday. It will be open daily from 5 p.m. to 1:30 a.m. going forward.