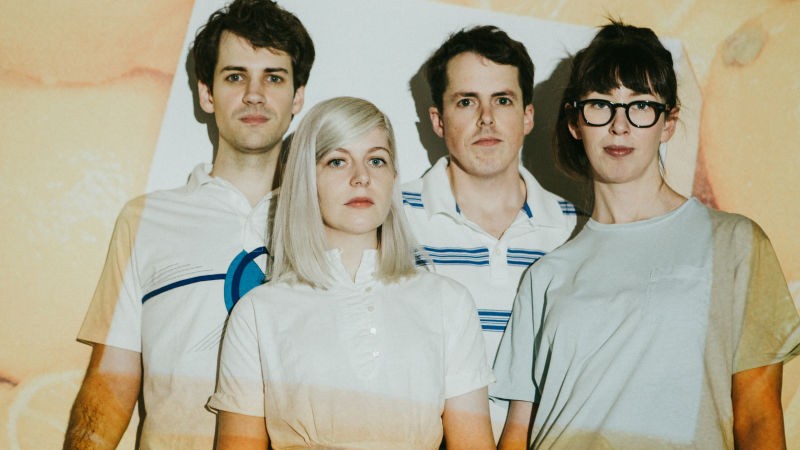 Alvvays is not a band to hide its influences. Its Tumblr page is full of photos and videos that help pinpoint its antecedents: R.E.M. circa “Radio Free Europe,” the Magnetic Fields’ Stephin Merritt, a Daniel Clowes comic comparing cartoonists to rock stars, and such ‘80s and ‘90s Scottish pop groups as Strawberry Switchblade, Teenage Fanclub and Shop Assistants. Asked to name their favorite albums, Alvvays’ members list a wide, mostly British range, from Cocteau Twins’ sublime Heaven or Las Vegas to the Soft Boys’ whimsical Underwater Moonlight.

Clearly, the Toronto-based band remains a group of music fans at heart. However, that doesn’t mean its members are in thrall to their influences. In fact, they’re consciously aiming to transcend them. This is immediately apparent on the band's second album, Antisocialites, released in September.

“I really wanted to control my influences and funnel them into what I was writing,” says Alvvays guitarist and lead singer Molly Rankin, calling from a hotel lobby in London. “It’s something I had never consciously done before. When I write demos, I try to think about what type of drums I want, what guitar sounds I want, anything that I like and envision for the song. It can sometimes shine through, and other times it gets lost. And both are good. You don’t really want to overtly mine something that you respect.”

On Antisocialites, the influences peep through on occasion. There are lyrical nods to Jonathan Richman and musical nods to the Primitives and Talulah Gosh, but these are merely window dressings to a truly compelling set of songs. Rankin approaches her subjects from a slightly detached perspective. She’s usually singing in the second person to a specific “you,” but uses creative metaphors and details to sort through the wreckage, contrasting sweet imagery with ugly reality.

“If I can conjure up a melody that I don’t think has been used already and has the ability to sit in my brain for an extended period of time, I try to make it into a song and plop words onto it,” Rankin says of her songwriting. “Often I have several guitar parts, a bridge, a pre-chorus and a few counter melodies. Sometimes I have less before I bring it to Alec [O’Hanley, guitar]. Once he and I have a coherent piece, we bring it to practice and work on drums and keyboard octaves.”

“Plimsoll Punks” is one of Antisocialites’ highlights. The melody is irresistibly catchy, with a sugar-fueled chorus of “You’re gettin’ me down, gettin’ me down, gettin’ me down.” Dig a little deeper, however, and it’s a song of frustration about disappointing, shallow people: “When I chip through your candy coating/You’re stuffed with insulation … You’re the seashell in my sandal that’s slicing up my heel.” Rankin defines the “plimsoll punks” as “the arbitrary all-seeing invisible eyes. That one is a riff on assigning artistic merit by authenticity litmus test.”

Then there’s “Lollipop (Ode To Jim).” In a rush of words, the song starts with a chance encounter with Jesus & Mary Chain’s Jim Reid, and imagines a complicated relationship complete with public drug usage, broken furniture and drunk driving. “You’re a lollipop in the form of a lightning bolt/You’re a lollipop in my hair,” Rankin concludes.


“I threw Jim into the beginning of the song as a fragment,” Rankin says. “We had a brief encounter with him in Australia, and his mysterious persona stuck with me for a while. The remainder of the song focuses on a young, reckless duo.”

It’s all a long way from Cape Breton Island, Nova Scotia, where where Rankin and keyboardist Kerri Maclellan began writing and playing together as kids. Rankin comes from a musical family, and spent most of her early years steeped in Celtic music. However, the duo’s tastes were closer to Weezer and Alanis Morrissette, eventually progressing to lesser-known sounds. As a teen, Rankin discovered Teenage Fanclub, the Replacements and the Smiths at a local store. “That kind of flipped the switch for me,” she explains. She was also inspired by Halifax stalwarts Sloan, who were “sort of rock idols for all of us when we were little. We used to watch them on television,” she says.

“Kerri and I having a long and solid friendship has been a huge help on this sometimes strange journey,” Rankin continues. “For the most part, we like the same podcasts, bands, drinks and clothes. I’d say the degree to which we agree on things is very annoying to everyone else sometimes.”

The members of Alvvays reserve a particular love for Dolly Mixture, a near-mythical English trio. Between 1980 and 1983, the trio released four singles on three different labels, mixing girl-group melody with post-punk minimalism. Upon the band's breakup, its members compiled the best of their unreleased demos onto a hand-signed and numbered double album, Demonstration Tapes. Now considered a cult classic, it’s impossible to find an original edition. Even CD reissues go for hefty sums.

“I think Dolly Mixture was recommended early on to me,” Rankin recalls. “I had made a pilgrimage to Toronto and found Everything and More at a record store called Sonic Boom. I started looking for the original album in the course of touring. I never actually found the vinyl, though. My brother found it for me on the Internet and sent it to me. I almost wept when I got it. It’s my most treasured vinyl.”

Alvvays has spent much of the last few years on tour, but this leg brings the group to St. Louis for the first time.

“Time off in January served me well,” Rankin says of future plans. “I’m cooking up some things on the Korg/drum machine combo in my little space. I’ll probably find another art cave when I’ve some time off, collect enough ideas and sentiments I can stand behind, and we’ll make something else.”