On Thursday, a group of researchers at Washington University took nerdcore rap to a whole new level with the release of an arthritis-themed parody of Migos mega-smash hit "Bad and Boujee."

The song, entitled "Smart and Smoothy," even comes with its own video, shot by Wash U School of Medicine videographer Huy Mach. Christopher Rowland, who is listed on Wash U's site as research lab manager for the Guilak Lab, led by Professor Farshid Guilak, Ph.D, does the heavy lifting, rapping about joint pain, degrading cartilage, immune cell inflammation, cytokines and more. He's flanked in some shots by Graduate Research Assistant Lara Pferdehirt and student Ali Ross.

Guilak himself even makes an appearance, setting down his "World's Best Boss" mug and picking up a what looks to be a femur bone, tapping it against his hand as he looks into the camera menacingly. 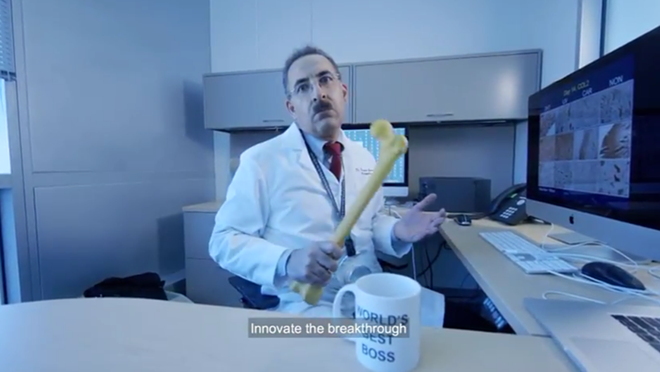 The video features captions throughout, meaning that even those of us whose scientific understanding begins and ends with "run hot water through crushed beans to create life-giving brown elixir" can follow along.

Wash U's med school is currently involved in STAT Madness, "the March Madness of biomedical science," which pits 64 teams from around the country against one another as a way of celebrating innovations in the field. The video was made as a fun way to promote their participation in the competition. Team Guilak recently made it into the sweet sixteen of competitors.

"The School of Medicine’s team ... is led by Farshid Guilak, PhD, a professor of orthopedic surgery. His lab earned a spot in the bracket for its work rewiring stem cells to produce an anti-inflammatory arthritis drug when the cells encounter inflammation," reads the YouTube description of the video. "The eventual goal is to create a vaccine that targets inflammation in joints. This video, inspired by Migos’ song 'Bad and Boujee,' is a fun take on the research.”

Watch the video yourself below: