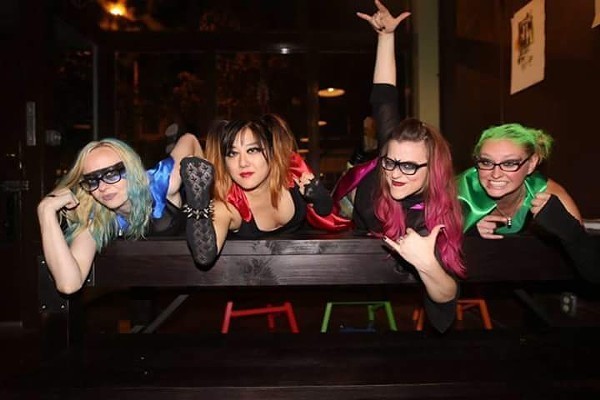 Decedy Album Release Show
w/ We Should Leave This Tree, Pure October
7 p.m. The Firebird, 2706 Olive Street. $10 tp $12. 314-535-0353.
According to brothers and bandmates Deric and Dylan Becker, the purpose of Decedy is simply to make rock music. And of all the rock prefixes — indie, punk, hard, et al — Decedy opts for good old-fashioned “classic,” a decision sure to raise the suspicions of skeptics and snobs steeped in tradition. Up to the challenge, the band's debut 1979 has an audacious name but makes a statement all the same for the local trio, which has cut and carved the set of songs following five years of singles and EPs.

Kid Chrome Band
w/ Paddlefish, Isabel Rex, Waterproof
8:30 p.m. Foam Coffee and Beer, 3359 South Jefferson Avenue. $5. 314-772-2100.
Kid Chrome Band fires off contorted garage-rock wrung out from a Seattle-based group of noisy punks. The band's backlog offers up as many live recordings as it does studio efforts — with the “studio” likely being a basement, warehouse or actual garage, judging by production quality. That's not to discredit its raw and honest sound. What you hear is what you get, with no polish or post-production mucking up the vibe. While the jury's out on whether that's an aesthetic choice or one made purely out of financial necessity, the songs here shine through regardless.

Buckethead
9 p.m. 2720 Cherokee Performing Arts Center, 2720 Cherokee Street. $20 to $35. 314-276-2700.
St. Patrick’s Day in St. Louis can either be a free-wheeling good time or a drunken nightmare, depending on one’s perspective on green beer, but all bets are off now that the legendary Buckethead has been thrown into the mix. Flecks of J-Pop and Yngwie Malmsteen can be heard in equal measure among the most bizarre, insane and disparate influences throughout the guitarist's staggering discography, which lists more than 300 full-length records. That's more albums than most artists have songs, not to mention all the masked shredder's cameos and guest riffage spread throughout the known universe.

Jack Toft
w/ Cranky Yellow, Ex Salis, Li'l Smokie, Zak Marmalefsky
9 p.m. El Leñador Bar & Grill, 3124 Cherokee Street. $5. 314-875-9955.
Jack Toft doesn't call himself a rapper, he just claims to “do raps.” And the Buffalo native does them prolifically, putting out fifteen tapes in the span of five years while carefully crafting such cuts as “Yer Man Sandals Must Be Destroyed” and “Bettin' On An E-Cig.” Toft’s lyrics flow over a simple and punchy backtrack that helps to serve every bratty, sardonic syllable at play. Several years of touring has made Toft into a DIY journeyman with a wealth of work that was recently funneled into We Can't Go Back Now, a “best of” collection put out by Cold Rhymes Records.

Urban Chestnut Black Lager Release Party
w/ the Vigilettes, Town Cars
9 p.m. Off Broadway, 3509 Lemp Avenue. Free. 314-498-6989.
International Women's Day may have been last week, but no one needs a holiday to remind them of the many women that command St. Louis rock. Just in case you're not looped in, the Vigilettes and Town Cars are both femme-powered workhorse bands that kick up dust in dive bars across south city on the regular. Town Cars' approach to pop craftsmanship comes with a rare sense of exploration while the Vigilettes deliver a symposium on songwriting overtop a pulverizing rhythm section. Sure, this night celebrates the age-old marriage of beer and rock & roll, but Urban Chestnut runs the risk of overshadowing its own release with a lineup like this.