As I and 100,000 more prepared to leave wherever we call home for wherever we could find what we think we're looking for (music, buzz, tacos, a Q&A with Elon Musk, a fist bump with Todd Rundgren), the news was not of South By Southwest, but of three cryptic and deadly bombings in Austin. As of deadline, the crimes remain unsolved, though links between some of the victims (two prominent African-American families) have been noted. The insensate violence of our times doesn't care about any of what you're about to read.

Pussy Riot knows a bit about that insanity, and as the first "band" I took in during my umpteenth trek to SXSW, they turned it into an insane, masked-and-strobed dance party on the patio club of Main in downtown Austin. At the kickoff for the music festival portion of SXSW (the "interactive" and film innovation portion has become far more than a prelude), the collective waved a flag for pussies and against dicks (literally: a flag was swept over the front row) and fantasized about the impeachment of Donald Trump and the imprisonment of their one-time imprisoner back home in Russia. The righteous rage of the performance couldn't dispel the nauseating feeling that the former is no more likely than the latter.

Superchunk is one of the few bands in town who could follow that kind of frenzy, and despite a late start the quartet, dressed so unpretentiously it's pretentious, the band roared through songs from its new and most political album What a Time to Be Alive, and never once stopped quivering on stage. Jon Wurster isn't just one of Twitter's greatest rock & roll wits. He's an indomitable spirit behind the drums, hurtling through every power-pop punk change. The crowd of dudes (because this is a dude band) young enough to be the sons of Superchunk sang along to every word. Sabrina Ellis of Austin art-punk band A Giant Dog joined them for a song, and Mac McCaughan led the crowd in a chant of "I love music! I'm not a target! Stop your branding!" The sentiment was necessary but no more likely to be realized than Pussy Riot's. And while I'm loathe to point out that the Gibson logo on McCaughan's duct-taped guitar is, you know, a brand, I'd be remiss if I didn't stress that the band kicked my ass and made me happy to be alive and here for the rock & roll in a far-too short set.

It's been over a decade since Leeds, UK band the Wedding Present made an appearance in St. Louis, and so I wasn't about to miss a chance to see them at SXSW. After decades of lineup changes, the band, still led by gifted melody maker David Gedge, sounds fantastic — fully alive and muscular and thrilling. If only Superchunk could have followed Pussy Riot, then only the Wedding Present could have followed Superchunk.

After an egregiously tuneless showing by Brian Fennell, aka SYML (songs about the "socials," as he put it, should never be sung so earnestly in public), the band Low set up slowly, carefully for its performance in one of SXSW's church venues. No guitars, no drums, no amps visible. Just a church organ and Mimi Parker and Alan Sparhawk dressed in black (I state the obvious) at a priestly lectern before the congregation. Save the organ drone and an electronic pulse, the set was essentially a cappella. Riveting, not really nihilistic, but close, with Parker and Sparhawk's voice surging through the rafters. He took a bite from an apple and shared it with her (fearing no symbolism), and at the end of a set that included a wonderfully surreal version of "Plastic Cup," the changing of water into wine (a neat trick by Sparhawk with the two glasses on the lectern), a moving version of "Will the Night," Sparhawk finally spoke to the assembly: "We'll see you on the field. Peace be with you."

Wednesday afternoon found me at the venerable Waterloo Records free parking lot day party for a young Richmond, Virginia songwriter and guilless band leader named Lucy Dacus. She has an anomalous charisma, with a sound that lilts and roars, and a vulnerable way with dark and unlikely rhymes ("first tasted somebody's spit…am I a masochist?"). "Are we playing everything fast?" she asked the crowd. The word fast doesn't come to mind, but poignant and compelling do.

Shopping, a UK-based, twitchy dance-pop trio, followed with crowd-pleasing show that reminded me of a garagey B-52s, with rhythm-guitar riffs Archie Bell (who was also in town) could get behind. Enjoyable but not especially memorable, much like Ought, who took the Waterloo stage at 5 p.m. and who, despite its notices and singer Tim Darcy's brooding delivery, seemed indistinguishable from a world of Joy Division acolytes.

I'd hoped to see L.A. glam dudes Warbly Jets on the east side of Austin at Hotel Vegas, but a schedule change for the band left me only with a few, enjoyable songs from the Cuckoos, who played ? and the Mysterians garage rock with sequins, mascara and a keytar. It was a strange segue into a musician I count amongst the most talented I was likely to see in Austin. Courtney Marie Andrews may not be known to you, but she should be, if not will be. The fickle industry that haunts these proceedings may yet take its toll on her country-rock charm and rich, gospel-infused voice. But even down on Sixth Street, the hazing of the soul that's often the only way to sum up SXSW didn't stand a chance. "May your kindness remain!" she pled on one of her best songs and the title of her forthcoming album on Fat Possum. And maybe, just maybe, it will.

Wednesday night continued with a truncated encounter (my fault alone, as I arrived late and had to leave early) with Ray Wylie Hubbard at Cooper's BBQ on Congress. Backed by his guitar-slaying son Lucas and deep-grooving drummer Kyle Schneider, Hubbard remains a songwriter's songwriter, a witticist's witticist, and, full disclosure, a longtime friend. Recently honored by both the Texas Heritage Songwriters' Association and the Austin Music Awards, Hubbard and his band were tough and lyrical and funny and blues-deep as always. If you live for a great song, regardless of genre, never miss a chance to see him. 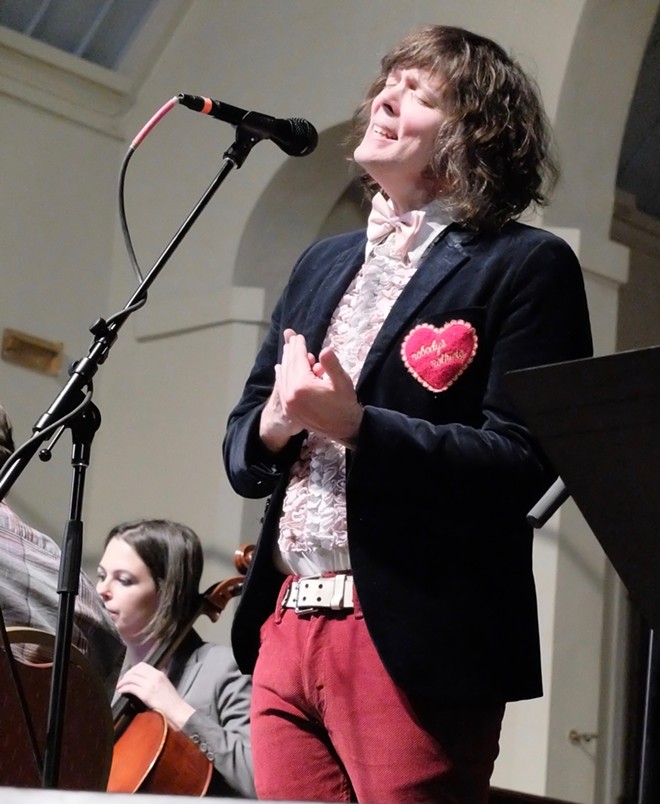 My Wednesday night drew to a close with Quiet Slang, the acoustic alter ego of James Alex of Philadelphia's Beach Slang, a Replacements cover band that is not a Replacements cover band, and I don't think Alex would mind the saying. In a church, with a string quartet, a piano, and two demure backup singers, Alex seemed truly moved by the sound that the quartet had arranged just a few hours before, as he had just met the quartet a few hours before. His blown-out voice had an affecting power in this setting, as did his songs, a pastiche of Bukowski and Bruce, all given a second chance at rock & roll life, which is more than most songs and singers at SXSW ever get. But that would not include Gaz Coombes, however, one half of the brother team behind sadly defunct UK rock band Supergrass. His solo set at the British Music Embassy had punch and heart and biting wit, and the new songs from the forthcoming album World's Strongest Man sound like keepers.

After a long Thursday afternoon at the Broken Spoke honky tonk (where I help to host the annual Twangfest day parties), I should have just let an avocado margarita buzz (if you're ever in Austin, don't miss them at Curra's Grill) send me off into napland. But SXSW is a million things, save sleep, and another church-venue set, this time from Chloe Foy of Manchester, England, was too great a temptation. Starting with a little drone and feedback, her set sparkled through apocalyptic and personal Brit-folk themes, her voice pure and haunting and deserving of notice to anyone who still plays Devandra Banhart's Golden Apples of the Sun compilation.

Next up was sweet set from country-blues-influenced Irish duo, the Lost Brothers, and then an outdoor show at Cheer Up Charlie's with Michigander Anna Burch. She was excellent, beaming on stage with a good, at times tightly grooving band behind her, as she breezed through songs from her new LP Quit the Curse. "This is another song about dating your drug dealer," she quipped. Burch has an April date in St. Louis at Foam. If you love indie-pop with a coy edge, do not miss her.

Two years ago I caught a short set from Marlon Williams at the aforementioned Twangfest SXSW party, and the singer won over a country-loving crowd with his impressive, Marty Robbins-esque croon. I do not know for certain what happened to him since then, but I'm guessing it involved lightning, Iggy Pop and Screamin' Jay Hawkins, who Williams covered to close out an astonishing performance on Barracuda's patio. Does "Holy shit" count as a review? No? Well, then see him, somehow, some way for yourself soon. There is no one in rock & roll like this 27-year-old from Christchurch, New Zealand.

And then Thursday night moved towards closure with a winning indie-pop set from Sweden's brilliantly named Hater at Valhalla. The band is more than chiming Stratocasters and Malmö accents. They have that rare spark of melodic life in nearly every song, and I wouldn't be surprised if I again seek them out this week in Austin.

And then came Todd Rundgren, performing his only SXSW show in a club the size of which he probably hasn't seen since before anyone, himself included, had a clue what a weird and indelible mark he'd make on popular music. Backed by a full band of weathered veterans (including Prairie Prince of the Tubes on drums and Greg Hawkes of the Cars on keyboards), Rundgren played new songs and obscurities, and did so with total joy. Of course he's mercurial, bordering on maddening, but he's incapable of phoning anything in, from the bizarrely political "Buy My T-Shirt" and the unapologetically hopeful "One World," he danced and rocked and did his nearly 70-year-old herculean best to hit every note in popdom. He high-fived a fan dude who twice saved his glasses that flung from his sweat-drenched face. And he came back for an unexpected and unscripted encore of the Cars' "Let the Good Times Roll." They did and Todd did and nothing could have better ended a long rock & roll Austin night.