The 5 Best Concerts in St. Louis This Weekend, March 2 to 4 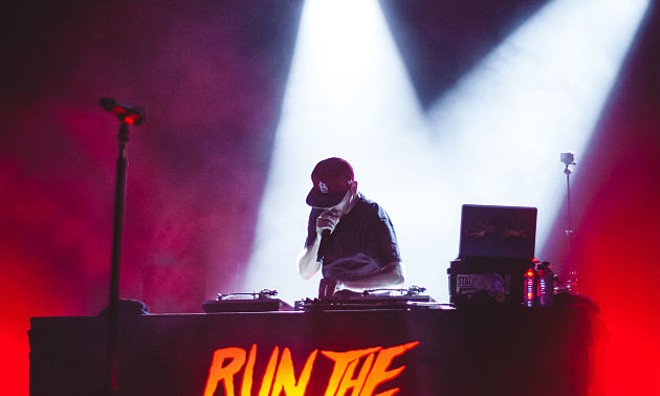 Lorde w/ Run the Jewels, Tove Styrke
7 p.m. Chaifetz Arena, 1 South Compton Avenue. $29.50 to $99.50. 314-977-5000.
With 2013’s “Royals,” New Zealand native Lorde became a dream-pop supernova at the shocking age of sixteen. It’s no wonder South Park skewered her with its “I Am Lorde Ya Ya Ya” bit — a parody Lorde took in stride. With support from Run the Jewels, who last graced St. Louis at 2017’s LouFest, this night offers up a powerful package of danceable music.

Trackstar the DJ w/ DJ Mahf, Vthom, Rockwell Knuckles and more
10 p.m. The Bootleg, 4140 Manchester Avenue. $10. 314-775-0775.
With “RAP FAN” plastered all over his promo material, Trackstar keeps himself grounded. A Wash U grad formerly known as Gabe Moskoff, Trackstar went from spinning at the Halo Bar and the Hi-Pointe Cafe to backing up Run the Jewels at festivals across the world. His Cinderella story goes like this: He reads an interview with Killer Mike that happens to include the rapper’s number. Moskoff dials and Mike actually picks up. That conversation leads to a mixtape. Fast-forward a few years and Moskoff is now the DJ of one of the biggest festival acts in the nation. Tonight Trackstar pulls double duty as he bounces from Run the Jewel’s supporting slot for Lorde at the Chaifetz to kick it with DJ Mahf and company at the Bootleg.

Kyle Landstra w/ Vernacular String Trio, JoAnn McNeil, Oxherding
8 p.m. Flood Plain, 3151 Cherokee Street. $5 to $7. No phone.
Being commissioned by Moog to make an album as a pack-in for a new synthesizer has to be one of the highest honors an electronic artist can receive. Chicago’s Kyle Landstra did just that, releasing Variables of Resolve to accompany the semi-modular Moog Mother 32 in 2016. The album was a feature of Record Store Day that same year, offering a live, unfettered document of Landstra’s approach to aural architecture. St. Louis’ own Oxherding, opening the show, is hot off the release of Circular Movements In the Sky, a new tape available through the Dismal Niche cassette label.

The Sleepy Rubies Album Release Show w/ Adam Hucke’s Music For Nerds, Irene Allen
8 p.m. Off Broadway, 3509 Lemp Avenue. $10. 314-498-6989.
In their first few months as a duo, Ali Ruby and Emily Wallace fired off a folky five-song EP and kicked off LouFest 2016 — but the pair’s seemingly bottomless well of hooky songs didn’t come out of nowhere. Big Mountain might be the Sleepy Rubies’ first full-length, but it follows a lifetime of two songwriters carving their craft together since high school.

Mosquitto at Foam w/ Comrade Catbox, the Mindframes
9 p.m. Foam, 3359 South Jefferson Avenue. $7. 314-772-2100.
Born from the charred remains of LA’s Last American Buffalo, Mosquitto strips its songs down to the purest form of straight-up psych-rock. There’s no re-inventing the wheel — instead the West Coast jangle cult opts to tune up this well-oiled vehicle of classic riffing. The band paints sex, drugs and rock & roll as romantic and inherently innocent in the pursuit of the best possible party. Not that anyone would dare stop them midway through the excellent “Cocaine Blues Part I” to serve up a reality check.