Gene Simmons Came to St. Louis and Charmed Us One-on-One 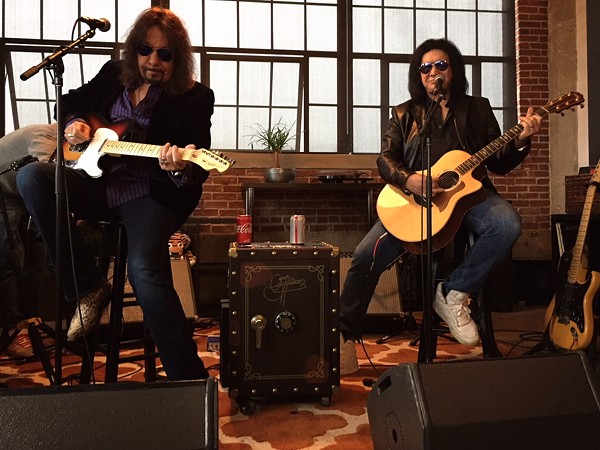 Who goes to a Gene Simmons event that costs $2,000 to attend? Are they weird rich guys? Are they mega fans? Are they average rockers just looking for some fun? There was only one way to find out.

Best-known as the flamboyant co-founder and bassist of classic rock mega-machine Kiss, Gene Simmons is also an unstoppable entrepreneur. He will proudly brand and sell any item, once famously licensing and releasing the Kiss Kasket.

His latest moneymaker is the Gene Simmons Vault Experience. Simmons is selling a mega box set that looks like a combination between a safe and a road case. It weighs 40 pounds and it contains hours of unreleased recordings. It also includes a little Simmons action figure and a massive book, among other things.

Among those things? For $2,000, fans get to bring a guest to an all-day event in a major city near them, where Simmons personally gives them their Vault. 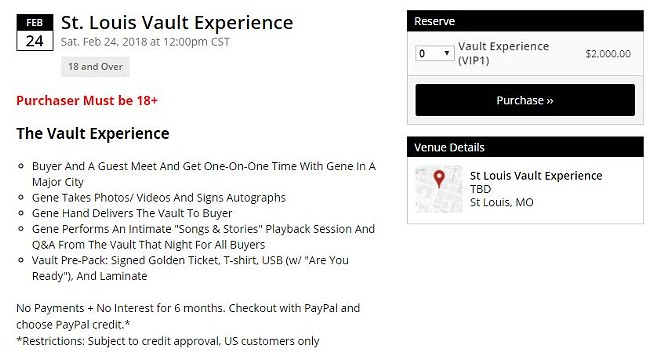 The event in St. Louis was hosted by Music Record Shop and held in the .ZACK building, where the shop is now located. Instead of taking place at the store, however, the Vault Experience was hosted at the shop's luxury green room/event space, 303.

The day would include an extended town hall-style Q&A, a break for some fragrant Pappy’s Smokehouse barbecue and then an acoustic set where Simmons was joined by Ace Frehley. All throughout the day, Simmons served himself up for private meet-and-greets with fans, autographing their Kiss memorabilia.

But the good times started at the front door, where the friendliest staff you’ve ever met welcomed all 120 guests inside one by one, making each person feel special. They also happily answered every little question, keeping the energy high and the people excited. These kind of long events can easily slip into tedium, but the staff was not about to let that happen.

Upon arrival, guests were asked to sign a photo release form and were given what looked like a tour laminate. Then they all hung out together in the lobby, speaking enthusiastically about their love for Simmons and about Kiss Kruises and other fan events that they’ve attended. (Did you know the Kiss Kruise has a waiting list?)

It was here, at the very beginning, that it became clear who had shown up for the event. Yep, it was the Kiss Army. And they were in full uniform. They looked amazing in all of their gear, showing it off to each other and having a great time.

As the only journalist at the event (Simmons only allows one at each Vault stop), I was led through the crowd and escorted backstage to do an interview with him before the show started.

When Simmons entered the room, he took it over. He’s tall and moves smoothly, and with a few long strides he flipped off the overhead light and asked everybody else to leave us alone. For a split second I thought I might have to tell him I wasn’t that kind of girl, but he was just making the room more cozy.

We settled in right away. He’s easy to talk to and every sentence he speaks is highly quotable. When I mentioned that I saw him last year at Chuck Berry’s funeral and that his impromptu speech was my favorite of the day, Simmons paused as if he was sincerely appreciating my compliment and then launched into an beautifully flowing monologue about the importance of Chuck Berry and how Berry’s music had influenced and been interwoven with Simmons’ own life.

“I was so ashamed that Keith Richards, Paul McCartney, everybody who owes their start to him [wasn’t in attendance]— I mean, rock and roll without Chuck Berry… no guitars,” Simmons explained. “And the guitar is the backbone of all of it. I mean, he is maybe the godfather of rock and roll. Yes, there was Little Richard and Fats Domino, but that’s keyboards. So I didn’t have anything prepared, I just spoke from my heart. And he’s right in front of me with the open casket — it was difficult to speak.”

He continued: “When I came to America, there was no Beatles or Stones. I mean, you knew about Elvis. It was 1958 and I was eight years old and the first music I heard was Chuck Berry." [Simmons sang a line of “Rock and Roll Music.”] "As a little kid I remember barely being able to speak English and not understanding the words and just kind of moving. And I’m aware that my body is moving because Lawrence Welk never did that to me. Chuck Berry opened the door.”

He went on to praise black music extensively, and I found myself swelling with new respect for the man. It doesn’t matter that Simmons has given similar quotes in the past, or even that he said a similar thing about an hour later to the (very touched) local crowd; each time Simmons says anything, it feels like he’s saying it for the very first time. You believe him.

Gene Simmons is such a charming bastard, it’s astounding. He could totally be a serial killer and get away with it, no problem. His personal magnetism is palpable. When he speaks he has something that makes you want to like him, even if you’re suspicious of his (*ahem*) political views.

Before he was rock star, Simmons was a sixth grade teacher, and I’d wager that he was a darn fine teacher, too. His recall abilities for dates is top-notch and his easy way of speaking could make even the most boring topic interesting.

After devoting a bunch of time to me (and insisting that we take a selfie together), Simmons went out to greet his crowd. They loved him and honestly, it’s easy to see why. He’s just so freakin’ good at entertaining. Every person there had so much damn fun. A couple even got engaged with Simmons assisting during the proposal.

More photos of the St. Louis Vault Experience below: 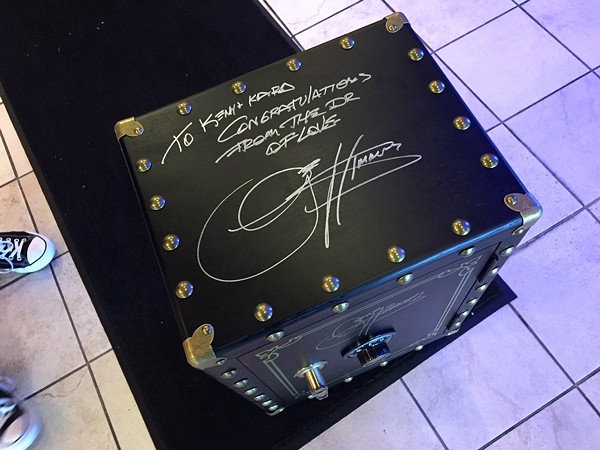