The 5 Best Concerts in St. Louis This Weekend: February 23 to 25 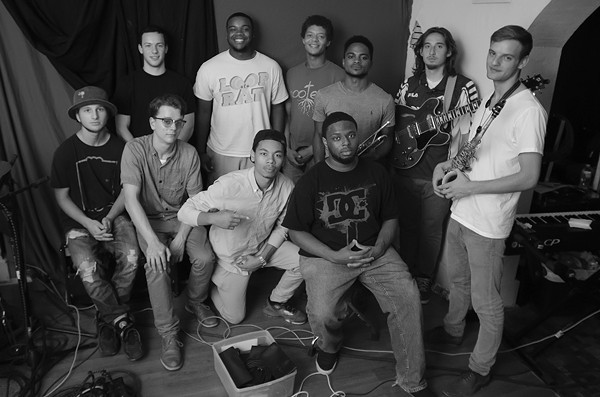 A Day to Remember w/ Papa Roach, Falling in Reverse, the Devil Wears Prada
7 p.m. Chaifetz Arena, 1 South Compton Avenue. $29.50 to $49.50. 314-977-5000.
Strictly for the fan who wants to wipe their ass with the logo of their favorite band, A Day to Remember offers what they call the "Pit Package," complete with a custom printed toilet paper roll. Don't worry, fashion-forward diehards can adorn their jean jackets with the included commemorative enamel pin. Commemorating what, you might ask? A Day to Remember celebrates fifteen long years as a stand-out in the mid-2000s set of mall-chic metalcore. St. Louis has already exhausted the band's stock though, so fans will have to take to eBay for that screamo TP — or wait for the long-rumored Papa Roach tampons.

Grace Basement Album Release Show w/ the Native Sons
8 p.m. Foam Coffee and Beer, 3359 South Jefferson Avenue. $5. 314-772-2100.
Mississippi Nights is a loaded album name for the roots-rockers in Grace Basement, though, for better or worse, the LP never directly refers to the long-shuttered venue that stood on the landing from 1979 to 2007. The title itself is innocuous to any non-native of the river city, yet provocative and nostalgic to the thousands who still miss the renowned gathering ground. That the new record offers an unguarded set of songs that slowly unfurl is a credit to band leader Kevin Buckley and his enduring sense of songcraft. Grace Basement celebrates the release of Mississippi Nights at Foam, a current core of underground music and art in the Cherokee Street neighborhood.

Looprat w/ Monkh & the People, Le Ponds, Tonina Saputo
8 p.m. Off Broadway, 3509 Lemp Avenue. $10. 314-498-6989.
There's a reason why this show comes with the tagline "All The Way Live." Looprat reaches well beyond its expansive collective of hip-hop luminaries (a full band with four MCs) to pull in the electro-folk of Le Ponds, the renowned songwriting of Tonina Saputo and the rock-reggae of Monkh & the People. Looprat itself injects heady rap into a jazzy funk fusion that offers the expansive feel of psychedelia with the brevity of punk. Sure, that looks like a long list of genres, but this crew mystically absorbs them all while being beholden to none.

Hum w/ Spotlights
8 p.m. Delmar Hall, 6133 Delmar Boulevard. $25 to $28. 314-726-6161.
The last show of 105.7 the Point's birthmonth — a series that brought K. Flay, Black Rebel Motorcycle Club and others to town — presents alt-rock axe-wielders Hum. If '90s revivalism stays hipster-chic — and givn the glut of bands adhering to those sounds at present that seems a distinct possibility — Hum's durability may last another two decades (2019 marks its twenty-year anniversary). The group's homeland of Champaign, Illinois, might be seated in the landlocked Midwest, but Hum's shoegaze-affected grunge has since reached both coasts, as evidenced by the fresh crop of overhyped bands aping its sound.

Qu'art presents: Black Is the New Black w/ Bates, Eric Donte, AndroBeat and many more
8 p.m. The Crack Fox, 1114 Olive Street. $10. 314-621-6900.
Qu'art caps three years of elevating queer artists with Black Is the New Black, a seven-hour sensory overload of visual art, live music and drag performances. Lady Ashley Gregory, Tishaura Jones and Dan Guenther are the featured panel speakers for the night, and their comments will likely be the only time dancers can come up for air from a stacked lineup including celebrated rappers Bates and Eric Donte. The black perspective is painted in full with pieces on display from De Nichols, Amber Johnson and Basil Kincaid, among many others. These many moving parts blend and coalesce into a showcase that celebrates the power of the groundbreaking acts and innovative artists on hand.