The 9 Best Concerts in St. Louis This Weekend: February 16 to 18 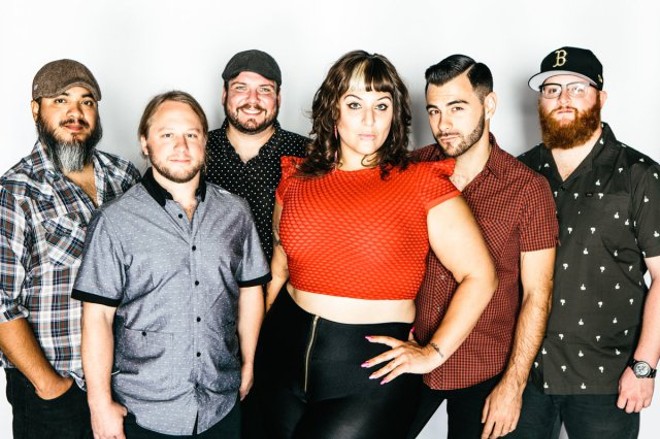 Alanna Royale
w/ the Grooveliner
8 p.m. Off Broadway, 3509 Lemp Avenue. $10. 314-498-6989.
Sultry and swinging rock ballads come barreling out of East Nashville in a headstrong muscle car called Alanna Royale. The sculpted soul outfit is six strong with Alanna Quinn-Broadus at the helm, steering the band's songs through the back alleys of Motown. Her voice comes with grit and girth gained from years on the emo circuit fronting a mall punk band, but Hot Topic-chic she is not. In its short life, the Nashville crew has already hit Bonnaroo, Austin City Limits, East Nashville Underground and Music City Roots — and it still squeezes that big festival vibe into the confines of any stage that can physically fit the full band, two-piece horn section and all.

Benefit for STL Winter Outreach Program for the Homeless
w/ Catholic Guilt, Fat Brick, Demonlover, Jaded Evil Lambs, DJ Deep Tape
9 p.m. El Lenador, 3124 Cherokee Street. $5. 314-875-9955.
There's a fine line between improvisational acts and straight-up jam bands. Catholic Guilt toes that thread between the two like a tightrope, willing to fall on either side depending on the wind (or the whims of frontman DJ Swan, also known for Sea Priestess). Yet this collective has endured the better part of a decade by swerving in every direction — a snotty punk band one day turns into a droning wall of feedback the next. This is Sun City Girls drowned in the muddy waters of the Mississippi, or a version of Boredoms living in the caves below Cherokee Street. This show marks the latest chapter in the Catholic Guilt mythos — the release of a homemade board game in lieu of an album. All proceeds go to a good cause, too.

Jonezy's Bday Jam
w/ Broke Poets, Karl Hearskra-z Livingston, Coalition Muzic, ReAck, DJ Tapes One
8 p.m. The Bootleg, 4140 Manchester Avenue. $10. 314-775-0775.
Jonezy's sharp and pointed flow comes backed up by a squad of essential river city rappers. While this show might seem focused on his latest revolution around the sun, Jonezy's birthday party is mostly a front for a stacked deck of DJs, beatmakers and emcees. Rec Riddles and Ackurate take their crushing collaboration ReAck to the stage one last time before laying their deft songcraft to rest for an indefinite hiatus. Of special note is Matthew Goetz, who moonlights as DJ Tapes One to help glue the inventive mix of performers on hand.

St. Louis Music Festival
w/ Guy, Teddy Riley, Ginuwine, Doug E. Fresh, Jagged Edge, 112, Next
6 p.m. Chaifetz Arena, 1 South Compton Avenue. $49 to $125. 314-977-5000.
Classics never go out of style right? There are two real ways of looking at shows like the St. Louis Music Festival: On one hand, many people go just to hear the singles they remember from a decade or two back, but on the other hand you have to give props to one-hit wonders who have weathered the storm of the ever-changing mainstream. No one on the bill is a one-trick pony, and whether you're wearing rose-tinted glasses of the past or you're going in blind, this is an extension of Valentine's day that should run well into the morning.

Firebird 9th Anniversary Party at the Firebird
w/ Hell Night, Valley, Spacetrucker
7 p.m. The Firebird, 2706 Olive Street. $10. 314-535-0353.
As a venue, the Firebird might take the most risks in St. Louis by betting on quality over quantity in both its audience and its talent. Even in its early days as the Bluebird, this midtown space has hosted acts on the rise and niche obscurities with little regard to genre. Seeing Deerhoof, the Melvins or the meme-fabulous Flynt Flossy in such narrow confines is an easy proposition, but the Firebird's cultivation of local music by hosting benefit shows and release parties makes up its core programming. Celebrate nine years running with three homegrown heavies in Hell Night, Valley and Spacetrucker, along with a barrage of sweet treats from sponsor Strange Donuts.

Lil Xan
7 p.m. The Ready Room, 4195 Manchester Avenue. $15 to $18. 314-833-3929.
Barely old enough to legally enjoy the taste of cheap Stag, Lil Xan takes his name from Xanax — the subject of his own past addiction and his catalyst to sobriety and advocacy. The rapper holds his crux high in both principle and sound by linking trap music to a term that's about to be commonplace in 2018: sad rap. While a break from Twitter would be small beans to anyone ten or even five years ago, Lil Xan's sabbatical from social media has made headlines. Now we wait for the fake accounts to pop up.

Silent But Sexy III: A Silent Disco
w/ Agile 1, Sinamin, Nico Marie, Alexis Tucci, Jen Ha, Jen Z, Sari, Postol, DJ Naekid
9 p.m. The Bootleg, 4140 Manchester Avenue. $10. 314-775-0775.
The thought of walking around this silent disco while the crowd is jacked into the system and hearing nothing but dance steps on the hardwood floors of the Atomic Cowboy seems Kubrick-esque. And while that might make for an experience all its own, you'd be missing out on a monstrous roster of Missouri's finest DJs. The fact that this lineup is entirely female/femme is beside the point — this is an experience beyond any other DJ night you've been to (unless you hit up Silent But Sexy I or II, of course).

Q
w/ Beyond Peace, Fried E/M
9 p.m. House of Eight Legs, 2714 Cherokee Street. $5. No phone.
The HOEL print shop on Cherokee Street will attempt to contain the perpetually collapsing core of energy that is hardcore punk act Q in a space that is cozy at best. The cramped confines of the room — and seeing just how three bands will manage to fit within — is reason enough to go, but be sure to bring ear protection, some padding and prepare to bump elbows with your fellow show-goers.