Ever wish you could step into a cool bar and walk around like you own the place? Now maybe you can.

The Waiting Room Bar and Venue (10419 St Charles Rock Road, St. Ann; 314-890-8333) is up for sale. Husband and wife co-owners Jimmy and Shannon Nichols are giving up their dream bar in exchange for something better — spending more time raising their five-year old daughter Stella. The late nights have simply become a daily grind for two loving parents who want to spend more time raising a family.

Still, letting go of that dream will be difficult.

“We used to say owning a bar was the hardest thing we’ve ever done," Jimmy says. "But I think selling it is going to be even harder."

Named after one of the most recognizable post-punk songs ever recorded, the blue-collar, punk-infused dive is a slice of south city heaven dropped into north county. Step inside and you're dazzled by rows of new pinball machines and stained glass Tiffany lamps that hang above the bar. It’s the kind of place you might find David Yow from Jesus Lizard as a guest bartender, soaking up praise and tequila shots (yes, that really happened). 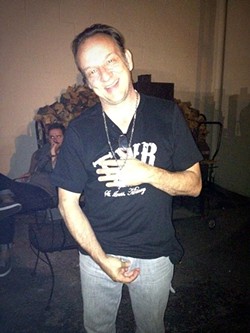 It's a bar that seems effortlessly put together, but a lot of sweat and tears went into making it what it is today.

In the mid 2000s, when the duo thought about what they might want from a bar, they came up with a concept for a music venue — not unlike much-missed but now-vanished local clubs such as the Hi-Pointe or the Side Door — that could showcase anything national or local: indie, punk, hardcore, even acoustic acts. Only this venue would act as a halfway point for music fans in St. Louis County.

They settled on a shotgun location in an abandoned strip mall in St. Ann.

“We had to do a lot of renovations — essentially we gutted it,” says Shannon. At the time they opened in 2008, there were relatively few small venues in the area that were focused on highlighting original music. “We were marketing this bar on Myspace — that’s how old we are,” Shannon laughs.

Then the recession hit. While the couple says they were saved by the Affordable Care Act (thanks Obama!), they lost a lot of finances tied up in ownership, so they scrapped the venue idea and focused on the bar. Then they had a baby. Before they knew it, new music clubs began popping up in the city. First Fubar, then Firebird and the Demo. “All of a sudden, all these other venues opened and we still didn’t have the money, so we just maintained our little bar because it was safest thing for us to do financially.”

But the safest thing turned into something amazing in its own right.

In true egalitarian fashion, the Waiting Room quickly became a local hub for barflies, craft beer lovers, freaks and geeks, punks and hipsters, metal heads and everyone in-between. In partnership with the Silver Ballroom, they introduced a wildly popular pinball league. One of their regulars introduced a beer league, which features a new, unique craft brew every week. Drink enough and your name is immortalized in a plaque on the wall.

“It’s a league for people who like beer but don’t like to play in leagues,” Shannon says.

Scores of travelers from all over the country visit, due to the bar’s close proximity to Lambert Airport and a rocking Yelp score. Shannon reps St. Louis by making flyers that highlight some of the best local places in the city to visit. “We had a lot of people come in during Ferguson and we sent all of them to Ferguson Brewing,” she says.

The Nichols’ philanthropic generosity is remarkable as well. The bar regularly supports cancer fundraisers, raffles, Toys for Tots, food banks, military overseas care packages and more. “One of the most amazing things about owning this business is that we have clientele with a lot of individual passions and we’ve always been very open to discussing how to help,” Jimmy says. “That’s always been important to me because, at the end of the day, we get people drunk for a living, and that stresses me out sometimes.”

In many respects, the community has become part owners. The front neon sign was a gift to the Nichols, bought and paid for by bartenders and clientele. In short, this great little neighborhood bar reflects a great neighborhood.

"This bar belongs to the people who have been there — our regulars who have kept our lights on," Jimmy says.

Now the Nichols find themselves wanting to dedicate more time to the simpler things in life. In addition to running the books and payroll at night, Shannon works during the day as a director of donor relations for the Foster and Adoptive Care Coalition, which helps find homes for kids in foster care. She wants to pick up hobbies she left behind, like photography and playing a mustang bass that Jimmy bought for her years ago. Meanwhile, Jimmy’s rock band, Murtaugh, is picking up speed.

Potential buyers could expect to get a turnkey business to keep right on trucking: a fully renovated building, a fenced-in patio space double the size of the bar, new bathrooms, a pool table, light fixtures and a 1890s-era back bar, crafted from Pin Oak with a Koken Barber Mirror. Pinball machines are on loan from Silver Ballroom, but Jimmy says a deal to keep the pinball league going can be worked out. If you’re looking to own something more than just a bar, and in fact a community, this could be the one for you.

“The bar business is tough, but super rewarding,” says Shannon. “It’s not easy, but there’s money to be made. You have to work at it — it takes dedication and marketing. We’ve been lucky.”