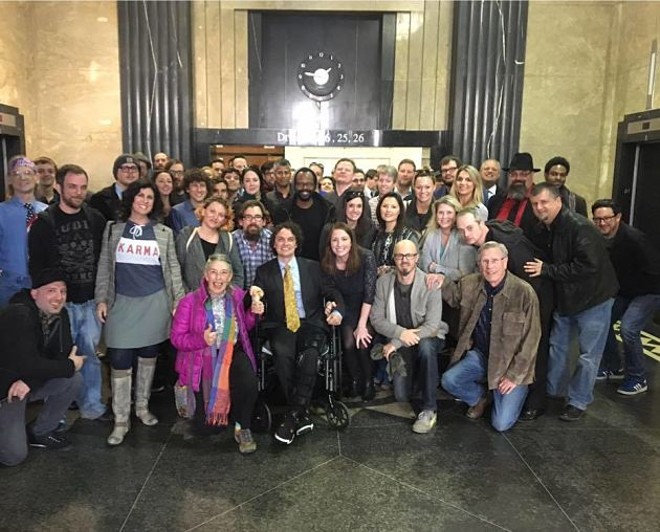 David Grelle doesn't remember a whole lot from the night of the accident that changed his life. In fact, ever since that fateful evening, he has trouble remembering a lot of things.

"I have no short-term memory anymore," he says. "Even with all the pain and shit everyday, having no memory anymore is definitely the most frustrating."

But despite those troubles, Grelle, 38, is sure of one thing: It was Michelle Conway who hit him with her car on the night of November 2, 2016, breaking 22 of his bones — including his legs, scapula, nose and nine ribs — and lacerating his liver before driving away and leaving his body on the ground in the rain.

"My wife was nine months pregnant, and it was actually Game 7 of the World Series, when the Cubs beat the Indians," Grelle says. "I was going to pick up dinner at Treehouse on South Grand — we live right in that area. I was probably about halfway when I got hit, in the middle of the crosswalk."

Grelle was struck near the intersection of Connecticut and Grand and says he was carried north about a block before he fell off the car just past CBGB.

"I hit the hood and the windshield," he says. "She dumped me in the middle of the road."

A good samaritan named Isabelle Raymond came upon the badly injured Grelle, initially thinking his body was a bag of garbage. It wasn't until she saw his socks move — Grelle had been knocked clean out of his shoes by the force of the impact — that she realized it was a human being lying in the middle of the road.

Raymond stopped her car and blocked traffic. Fortunately there was already an ambulance in the neighborhood, and Grelle was quickly rushed to the hospital for emergency surgery and blood transfusions. He would end up staying in that hospital for a month, getting out just a couple days before his daughter was born.

"I mean, I don't really remember it, but I got to at least be there," Grelle says.

Grelle's long road to recovery would next take him to a hospital bed in his living room. Grelle's semi-retired father had to quit his job at Menard's to care for his son. Grelle found himself using a wheelchair for four or five months, then a walker, nowadays a cane.

The person who hit him, meanwhile, simply went about her night as though nothing had happened.

"She literally just drove around the corner, parked her car and met friends for drinks at the Upstairs Lounge right there," Grelle alleges. "She actually saw me getting put in the ambulance."

That night, Kasey Grelle, David's wife, got a call from a number she didn't recognize around 11 p.m. Initially she ignored it, assuming it to be a telemarketer or wrong number. When the phone kept ringing she googled the number and found that it was registered to SLU hospital.

"I ran outside; my car was gone. I called Dave's phone; it goes straight to voicemail," she says. "Then I called SLU and they said, 'All we can tell you is your husband is here in stable condition with several broken bones.'"

Kasey Grelle rushed to the hospital to find out what had happened to her husband. She found more questions than answers.

Kasey contacted police, but was told that the officer who had arrived on the scene had left for the night already. He'd be returning the following day at 3 p.m. In the mean time, Kasey — a former reporter for KSDK — set to work piecing together what happened herself. She traced her husband's bank account records and found a purchase at the grocery store across from Treehouse, where she found her car. When she finally did get in touch with police, they told her that the police report didn't contain anything — when the officer arrived, Grelle had already been taken away in an ambulance. They told her that there was no evidence, and therefore nothing to investigate.

That's when the pregnant Kasey decided to take matters into her own hands, telling police, "Fine then. I'll investigate."

Kasey started canvassing in search of witnesses and soon put together a witness sheet for police. She even found Raymond, the good samaritan, through a Tower Grove South messageboard. Raymond had called 911 at 9:40 p.m.; Kasey meanwhile had a receipt from Grelle's wallet that showed he'd made his purchase at the grocery store at 9:37 p.m.

Kasey contacted a police officer friend who works in the Real-Time Crime Center, which runs a network of city and privately owned security cameras. With only a three-minute window to comb through, the officer soon found video of a badly damaged vehicle driving thought the intersection of Grand and Juniata, near where Kasey's car had been parked. Kasey turned all of that evidence over to police, and weeks after the hit-and-run, officers found Conway at her home and confronted her.

Conway, 28, denied any wrongdoing, and claimed that the damage to her vehicle was caused by someone throwing a brick at it, according to police records. But Kasey persevered. She says she personally took the dossier of evidence she'd assembled to a St. Louis prosecutor.

On November 17, some two weeks after the incident occurred, the St. Louis Circuit Attorney's Office filed against Conway for leaving the scene of an accident, a felony.

Initially Conway pleaded not guilty, but on December 11, she entered a guilty plea. She is due to be sentenced tomorrow, February 16, at 9 a.m. by St. Louis Circuit Court Judge Steven Ohmer.

Kasey believes the reason for the change in plea might be a statement by one of Conway's friends. 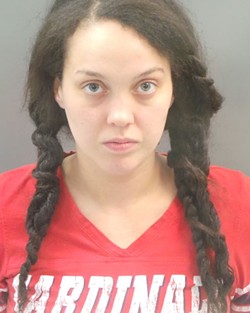 According to Julia Jonczyk, who is listed in court filings as a witness and was Conway's roommate at the time of the incident, Conway arrived at the bar with damage to her vehicle that she claimed came from being struck with a brick. As Jonczyk would later tell the police, she viewed the car and said she didn't think it looked like damage from a brick.

When Jonczyk suggested Conway call the police, Conway declined, saying she didn't want her insurance rates to go up, according to Jonczyk's statement to police. As they walked to the bar, Jonczyk saw Grelle being loaded into an ambulance; she then asked Conway if that could possibly have anything to do with her accident.

According to what Jonczyk told police, Conway responded by saying that "her parents were going to take care of this."

Since the ordeal began, Grelle's family, friends, fans and supporters have packed the courthouse for each and every hearing. A well-respected musician in the local scene, Grelle has performed on keyboards and piano with Funky Butt Brass Band, Mathias & the Pirates, Kevin Bowers’ Nova, Hip Grease, Celebration Day, Street Fighting Band and the Feed. He even manned the keys for the Hail! Hail! Chuck Berry concert that took place at LouFest in September.

In keeping, there have been a lot of musicians and music fans hanging around the courthouse lately.

"It's been insane. The first few hearings were standing room only and people had to wait outside," Kasey explains. "The last one there were probably about 40 people. To the point where the bailiff is going through and saying, 'Are you here for this case? What are you guys all doing here?'

"It's like a who's who of music in St. Louis," she adds. "We've got really great friends."

One of those friends is Off Broadway's Kit Kellison. Kellison even started a Facebook group to keep people updated on the case and to encourage folks to come out for each hearing. They'll be coming out in force one last time for the hearing tomorrow.

"All we do is show up, and we pack the courtroom," Kellison says. "I really think it changed a lot as far as making a difference on how seriously they took the case."

She points out that t-shirts have been printed with Grelle's face on them to raise money to help out. Off Broadway did a benefit show as well. The group wants one simple thing in this case: justice.

"The fear obviously is that she's just gonna get away with a slap on the wrist," Kellison says.

Grelle, meanwhile, is a little more philosophic when asked what his ideal outcome would be regarding Conway's sentencing.

"For me, it's all about some sort of permanence. Some sort of reminder," he says. "You know, I'll never be able to run again, jump again, ski, hike, do a lot of the things I enjoyed doing. I can't even throw my son up in the pool, or even carry my kids up the stairs.

"I'm gonna be living with this forever, my family is gonna be dealing with it forever," he continues. "If anything I just want — I don't really care if she does any jail time. For me it's more just to have that reminder, you know?"