The 7 Best Concerts in St. Louis This Weekend: February 9 to 11 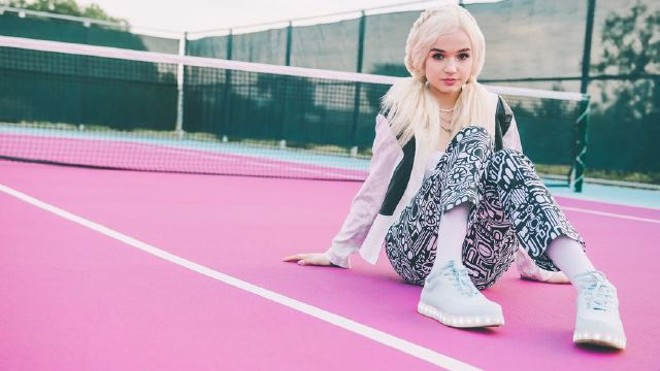 With Valentine's Day landing — very appropriately — on hump day, both this weekend and next are equal partners to everyone's favorite Hallmark holiday. The shows in the days ahead range from bleeding heart songwriters to clean and robotic pop, two genres that could be easy backdrops for a romantic (and low-cost) jaunt through the river city.

Chris Bandi
8 p.m. Off Broadway, 3509 Lemp Avenue. $10. 314-498-6989.
Country crooner Chris Bandi hits Off Broadway and his childhood home of St. Louis to follow up last year's "Man Enough Now," a single that garnered well over two million views on Youtube. His songs reach for affection with a tinge of regret, making for sappy but relatable words coated in a thin veneer of southern twang.

The Gripsweats
10 p.m. The Bootleg, 4140 Manchester Avenue. $10 to $12. 314-775-0775.
For those looking to preempt that box of chocolates by shaving off a few pounds via ass shaking, the Bootleg hosts Nashville's Gripsweats for a funk-fried night of dance music with DJ Hal Greens behind the ones and twos.

Key Grip w/ Nebulosa
9 p.m. The Heavy Anchor, 5226 Gravois Avenue. $7. 314-352-5226.
The Heavy Anchor's Friday night veers left of center with an audio-visual feast served up by experimental collective Key Grip. Subtle percussion comes baked in warbling synth while a rotating cast of St. Louis shredders create a soundtrack to video projections in real time. Nebulosa blends kraut rock with minimalist pop through a few simple devices and a smooth, monotone voice that brings the temperature down to whatever a cucumber tends to be — it's that cool.

They Might Be Giants
9 p.m. The Pageant, 6161 Delmar Boulevard. $25 to $35. 314-726-6161.
105.7 The Point kicks off what they call their BirthMonth by hosting They Might Be Giants over at the Pageant. For those of you who don't play music, there's something of a "post-release euphoria" that happens to a band after — you guessed it — a new album hits the shelves. Expect They Might Be Giants to be in rare form on this night, only weeks removed from the release of its twentieth studio record I Like Fun back in January.

Poppy
8 p.m. The Ready Room, 4195 Manchester Avenue. $18 to $20. 314-833-3929.
Who doesn't love a little conspiracy theory sprinkled on their pop music? Avril Lavigne died and was replaced by a clone. Lady Gaga killed Lina Morgana. And in 2018, people believe Poppy is not human. On Saturday, you can confirm with your eyes and ears if the doll-like Poppy was built from AI or hatched from an egg like the rest us. The Ready Room hosts the ceramic singer as her sound spreads and multiplies through the space, infecting showgoers with a sultry, synthetic blend.

Jacob Sartorius
5 p.m. The Pageant, 6161 Delmar Boulevard. $25 to $30. 314-726-6161.
Speaking of pop acts who were potentially made in a lab, the Pageant hosts a daytime show on Saturday for Jacob Sartorious, the fifteen-year-old pop singer who rose to fame through lip-syncing on musical.ly and anti-bullying videos on Vine. His latest string of singles on Youtube show the teen muser moving and singing with the kind of charisma reserved for pop stars twice his age. We're either looking at a kid genetically modified to make songs or a person with the utmost dedication to their craft.

St. Louis Chamber Chorus
3 p.m. The 560 Music Center, 560 Trinity Avenue. $10 to $30. 314-421-3600.
The 560 Music Center offers a classic Valentine's Day concert on Sunday with Love Dances by the St. Louis Chamber Chorus. This highlight of the choir's 62nd season offers rare accompaniment with a pianist and two grand pianos inside the concert hall. This matinee starts at 3 p.m., putting the show in a sweet spot after a holiday brunch or before a romantic dinner. It's only appropriate to close out the weekend with some literal sounds of the season.