Ahead of a performance tonight at Foam, St. Louis indie-rock trio Other People is premiering a brand new track, "Rivers," exclusively with RFT Music.

The track is a keyboard-driven affair clocking in at just over three minutes. Uncharacteristically for a band that features two members capable of playing drums — Jeremy Goldmeier and Bob McMahon co-lead the band, and whichever isn't singing on any given song usually occupies the drum throne — "Rivers" is a more spare affair, featuring no drum kit at all.

Instead, Goldmeier leads on keys and vocals while McMahon plays guitar and A.J. Lane plays bass. The song was recorded at Shock City Studios by Luke Arens.

The track will actually be one of the last Lane records with the group. McMahon, who is also an occasional RFT contributor, says Lane is moving on to focus more on his own band, A.J. Lane and the Simple Machines. The split is friendly, though, and Lane will record five more songs with the group before officially taking his leave. Those five songs, "Rivers" and June's "Summer High" will be released on an as-yet-untitled album some time in the future. 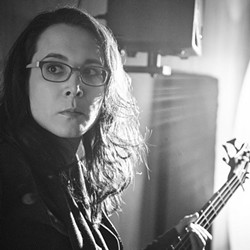 Live, though, the band's lineup has already experienced a shift. Tonight's show will feature Michaela Kuba on bass — her first performance as an official member of the band. McMahon says he met Kuba when the two of them played in the pit orchestra for Stray Dog Theatre.

Other People will perform at Foam tonight alongside Thames and Wesley Jensen & the Penny Arcade. Check out the new track below.