The 10 Best Concerts in St. Louis This Weekend: December 1 to 3 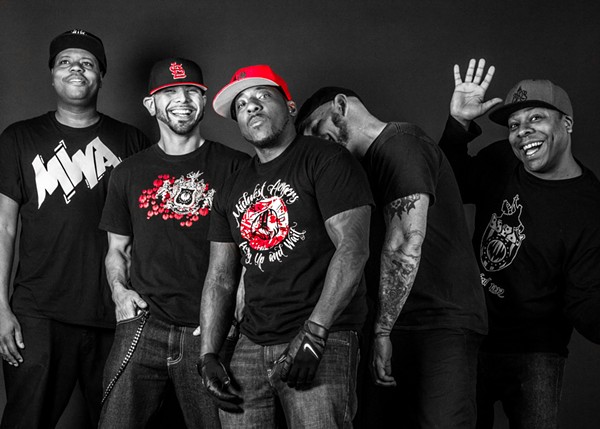 This weekend serves the past, present and future of local music with three full days of festivals, benefit concerts and a documentary screening to change things up. Waves of nostalgia beat down on the river city when Mase and Lil Kim come to town for the Bad Boy Holiday Jam on Saturday. Between Battle Trance presented by the New Music Circle and the STL Free Jazz Collective, music fans have solid avant-garde alternatives to more mainstream sounds.

Whatever your taste, you can find your flavor below.

Phillipalooza w/ Funky Butt Brass Band, Falling Fences, The Mighty Pines, The Service, Alligator Wine and Friends, The Scratchtones, Crate2Crate Sound System
5 p.m. Old Rock House, 1200 S. 7th Street. $15-$25. 314-588-0505.
A dedicated contingent of local musicians throw Phillipalooza every year in honor of Phillip Wright, who lost his battle to amyotrophic lateral sclerosis, a.k.a. Lou Gehrig's Disease, in 2006. This edition stretches across both Friday and Saturday at the Old Rock House, and includes a boundless span of style and substance. While the lineup on this night is as strong as they come, Saturday offers the likes of Jake's Leg, Madahoochi and many more. A portion of the proceeds goes to the ALS Association — St. Louis Regional Chapter. Read more about the disease and donate directly at http://webstl.alsa.org/

Rise Against w/ Biffy Clyro
8 p.m. The Pageant, 6161 Delmar Boulevard. $35-$40. 314-726-6161.
The Washington Post's summation of Rise Against as "a Noam Chomsky band in a Hot Topic world" might be a bit on the nose, but so is the group's outspoken nature. These are hardcore songs made as mainstream as possible, but not by the band's own design, necessarily. The guttural response to George W. Bush-era politics heard in 2004 debut Siren Song of the Counter Culture could just as well be dropped in the center of Trump's America. Scottish alt-rockers Biffy Clyro support with an opening set, bringing heavyweight riffs that fall somewhere between Fugazi and early Nirvana without coming off as a facsimile.

Bad Boy Holiday Jam
8 p.m. The Pageant, 6161 Delmar Boulevard. $40-$60. 314-726-6161.
By Daniel Hill
Ah, the holiday season is upon us again. Time to break out the mistletoe and the menorahs and the trees we keep indoors — and, of course, the P. Diddy-approved hip-hop legends. That's right, this year St. Louis launches what will hopefully become a winter tradition with the Bad Boy Holiday Jam, bringing the Queen Bee herself, Lil Kim, alongside fellow Bad Boy Records mainstay Mase. The former is working on a new album set for release in 2018; super-producers Pharrell Williams, Metro Boomin and Mike Will Made It are rumored to be involved. The latter's story is a little more complicated: Mase has retired from the rap game twice now — initially in 1999, to become a pastor, and then again in 2007 after a brief return as the self-described "Bad Boy gone clean." Neither retirement would last, and in 2013 the rapper announced that he was working on his first album since 2004, titled Now We Even. Years have passed without that album coming to fruition, with no clear end in sight. Maybe he'll lead the prayer portions of the night?

Julien Baker w/ Half Waif, Adam Torres
9 p.m. Delmar Hall, 6133 Delmar Boulevard. $16-$18. 314-726-6161.
By Roy Kasten
For Julien Baker, songs are prayers liberated from sanctimony, scarred by her own fundamentalist Christian upbringing, illuminated by little more than piano, gleaming (sometimes flaming) electric guitar and devastating string arrangements. And then there’s that voice: Newcomers will hear Adele, maybe, or Ellie Goulding, but with an ineradicable Tennessee twang that grounds her in a landscape rich with conflict and beauty. As she sings on this year’s riveting debut album Turn Out the Lights, she’s finding “comfort in failure, singing too loud in church, screaming my fears into speakers.” Prayer, as a Danish philosopher once wrote, is about changing the nature of the one who prays. And Baker’s voice and songs will change you.

Battle Trance
8 p.m. The Luminary, 2701 Cherokee Street. $10-$20. 314-773-1533.
Presented by New Music Circle
That Battle Trance can cut through to a wide array of ears using four tenor saxophones feels somewhat baffling, yet the Brooklyn-based quartet manages to carve out its own hole in the avant-garde canon by weaponizing its reeds. Hornsmith Travis Laplante concocts the group's pieces, relating each section through instruction and demonstration. For both of its records, Blade of Love and Palace of Wind, Battle Trance emanates power with circular drones and soft, hypnotic squalor. Warbling tonal waves transform any live space into a portal of aural fixation — the Luminary will be no exception. Presented by New Music Circle, this event marks the organization's last show for 2017.

Midwest Avengers 25th Anniversary Show
7:30 p.m. The Ready Room, 4195 Manchester Avenue. $10. 314-883-3929.
Given the ticket price, this show is a steal even for casual fans of the St. Louis hip-hop and rap scene. From P.R.E.A.C.H. to Nite Owl to Pogo Funk, this six-hour power run features more than twenty performers, not to mention the hip-hop headbangers themselves, the Midwest Avengers. Having evolved from a emcee collective to a full-on band, this crew has taken a strange trajectory down winding paths of style and genre, which ultimately intersect at a place of pure force and energy. The band is part of the bedrock beneath St. Louis, a foundation that most local musicians under age 30 are indebted to in some way, shape or form. Even if the Midwest Avengers stopped today, their contribution would leak into the conversation for another 25 years.

The STL Free Jazz Collective
7 p.m. 14th Street Artist Community, 2701 14th Street. Free. 314-898-5444.
By Thomas Crone
From The STL Free Jazz Collective Has One Focus: Musical Improv:
Though keyboardist Jim Hegarty considers himself the introvert of the STL Free Jazz Collective, he's also the group's de facto bandleader, having put together the six-piece group in advance of its March 2015 debut at the late, lamented Tavern of Fine Arts. A resident of St. Louis for about twenty years, Hegarty had gigged with most of these players and knew the rest. Matching personalities and skills, he was able to recruit the exact sextet that he hoped could do two things: reference St. Louis' lengthy, impressive history in free/improvised jazz, and, as importantly, not be held to replicating it.

Winter Wolves: A Benefit for The Endangered Wolf Center w/ Vimur, Stonehaven, Terranaut, Ectovoid, Nucleus, Hrafnskrald, Stagecoach Inferno, Animated Dead, Emaciation, Grand Inquisitor
5 p.m. Fubar, 3108 Locust Street. $20. 314-289-9050.
The ten bands on offer range from all the hues of metal, starting with death, thrash and black while barring the more mainstream shades. This midwest mix reaches from Georgia, Kentucky and Illinois with a few St. Louis acts to round out what might as well be called a festival. All proceeds go to benefit the Endangered Wolf Center, an organization that works to preserve wolves and reintroduce them into wild. This institution considers itself one of Missouri's best kept secrets, even within its home turf of St. Louis. Donate directly to the cause at https://www.endangeredwolfcenter.org/

Y98 Mistletoe Show w/ All Time Low, Fitz and the Tantrums, All American Rejects, John Rzeznik, Lights
6 p.m. Family Arena, 2002 Arena Parkway, St. Charles Street. $9.81-$79.95. 636-896-4200.
Between Pointfest, KSHE's Pig Roast and Y98's Mistletoe Show, St. Louis' radio stations cover the full spectrum of rock and roll year round. Y98's approach has maybe welcomed the most change over the years, evolving with a focus on high energy and positive vibes. And that couldn't be made any more evident than with their big holiday shindig to close out 2017.

Never Say Goodbye: The KSHE Documentary
2 p.m. Delmar Hall, 6133 Delmar Boulevard. $13-$15. 314-726-6161.
By Thomas Crone
From New KSHE Documentary Never Say Goodbye Details the Station's Early Years:
During the early days of KSHE 95, DJs were able to set the mood of their shift, in part, through the use of a large lamp sitting on the console. As programmers rolled in for a shift, they were able to manipulate that lamp's brightness in order to hit just the vibe they wanted in the air studio. For several decades, this humble lamp, looking like a refugee from a church jumble sale, was only known to a few intimates of the station. Until now. Ron Stevens, an afternoon drive-time host at KSHE from 1968 to 1976, is offering the rabid KSHE audience a fulfilling, nostalgic love letter in the form of Never Say Goodbye: The KSHE Documentary, a 94-minute work that exhaustively covers the station’s earliest days.