Morrissey Is a Boring Old Jackass 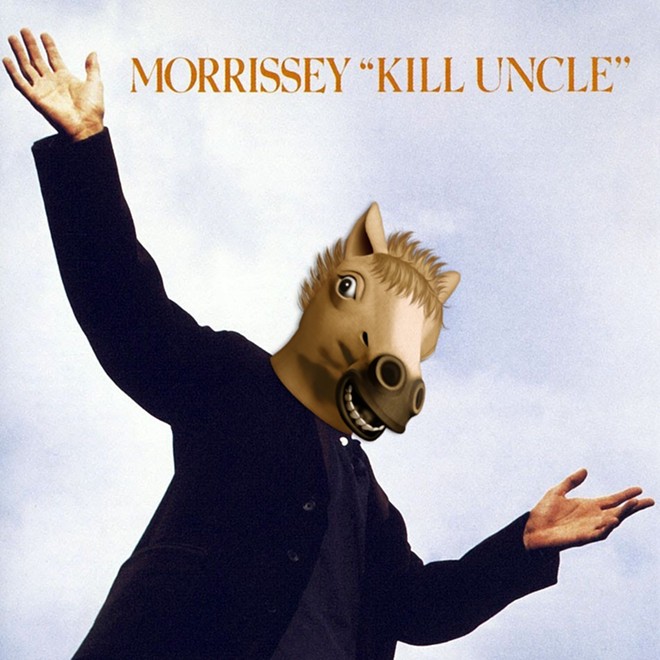 Morrissey used to stand for something revolutionary. He was the bespectacled leader of the sensitive ones. He was the non-threatening — yet still acid-tongued — boy with the thorn in his side. He was a hero to the kids who were too smart for their own good. He was a shining beacon for lost souls who were searching for a light that never went out. Non-fans couldn’t understood. They thought that he was a weak, wounded douchebag. And he was, but that gave him power in a “you can't hurt me, I’m already dead” kind of way. His shy slouch and fresh sense of style attracted both boys and girls. The well-worn jeans, the Clark Kent glasses, the flowers in the back pocket. Oh, he was a pretty one. As the frontman of the Smiths, he was also morbid, sometimes brazenly so. And he was rude in his interviews and in his lyrics. But it all seemed like a studied reaction to a cruel world, a defense mechanism easily recognizable by any teenager with a bit of a dark side. Morrissey was like a frightened kitten taking swipes at an uncatchable shadow. But now it’s all different. In his old age, the king of the outcasts has become just like your weird racist Fox News-loving uncle. The pope of mope seems to have lost his damn mind. Morrissey has recently entered levels of shut-the-fuck-up heretofore only reached by Lena Dunham. The conservative views that Morrissey possesses these days are beyond confounding because the dude practically invented the concept of “snowflake.” As a feelings-first animal rights activist of undefined sexual identity, young vegetarian Morrissey was basically the prototype for the kind of man that conservative groups would eventually rally against. Once he even said that he makes a point to leave gender out of his lyrics so that he can “write for everybody.” This is the kind of statement that usually makes the right panic that the world is sliding into an inclusive, nonbinary, androgynous future in which they’ll no longer have ownership of women.

Over the past seven or eight years, Morrissey has released statements and given quotes in interviews that repeatedly show him to be anti-Muslim, pro-Brexit, horribly racist and — just in the past few days — a raging misogynist who makes a point to defend Harvey Weinstein and Kevin Spacey. He even said that “rape is disgusting… but we have to see it in relative terms.” Basically, every single time that Morrissey has opened his dumb mouth lately it has been a complete disaster. (Sound familiar?) Morrissey was probably trying to be controversial, but these views really just make him a crashing bore. So many other moronic men in the music business already talk like this. You can hear this kind of jabber from Kid Rock. Or Ted Nugent. Or Gene Simmons. Or Dave Mustaine. Or Mike Love. Or Billy freakin’ Corgan. But just in case you’re somehow running low on opinions from clueless crusty old has-been white guys, you can now also hear this nonsense from your pal Morrissey, too. It’s all so predictable. Modern Morrissey is a blob of trash-talking idiocy with a weak hairline and a lumpy paunch, just like all the rest of them.

Interestingly, he’s remained a favorite of many otherwise tender-hearted liberals across the globe. Maybe it’s because he got his hooks in them when they were young. Or maybe they are unaware of the depth of his disgustingness. Or maybe they just don’t care. To be a fan of the music is often different than being a fan of the artist, after all. But it is kind of shocking that there aren’t protests outside every single Morrissey show. I think the only reason this doesn’t happen is because many of the activists who would normally be protesting him are fans that have paid to go inside and see him perform. It's a weird situation: those who have been drawn to him in the past for his counterculture views are the exact same group of people who might be repulsed by his current conservative views. (Social justice warriors of the world: unite and take over.) I love the Smiths but I wouldn’t pay $6 to see Morrissey now. I know this for sure because that’s how much tickets for the show tonight at the Peabody are going for on StubHub. There are also tons of paid advertisements for the show popping up on social media feeds, making me think that the show is way undersold. Maybe his former fans are over him. Or maybe current fans are afraid he’ll cancel or postpone. He does that a lot. In fact, he cancels so much that many fans wonder if he has some kind of serious illness or mental disorder that would explain his erratic behavior.

When he does manage to make it to the stage, he does it grandly. He’s barely even there to perform, more to be a sponge for a huge amount of adoration thrown at him. This is an event where straight white men openly weep and fling themselves at him. It’s like a little oasis from heteronormative culture where they can let their guard down. Here, men aren’t shamed for expressing their emotions or acting “feminine.” It is the ultimate safe space. I wonder what Morrissey’s conservative friends think about that. I wonder what Morrissey thinks of that. I saw one of his concerts ten years ago at the Pageant with a mega-fan friend who was visiting from out of town. It was Morrissey’s birthday and he was extra over-the-top. On stage he seemed to be aiming for Elvis but he always lands at greasy Tom Jones, all preening and Vegas cheese. He took off his shirt and threw it into the crowd and fans attacked it like hungry dogs. I got a glimpse of it and if memory serves, it was lavender and Gucci. I’ll give him that, at least.
But I won’t go to his shows anymore. My brain won’t fully allow me to disconnect his sickening quotes from the music. It’s like how some men don't want to know too much about a stripper's real life because it ruins the fantasy and they can’t get turned on by her anymore. Well, I know too much about Morrissey and I wouldn’t be able to get it up for him anymore, either. Not even a semi. So if he doesn’t want to lose even more fans to their consciences, he’ll do what he should’ve done many years ago: Shut his stupid face. Lord knows it would be the first time.