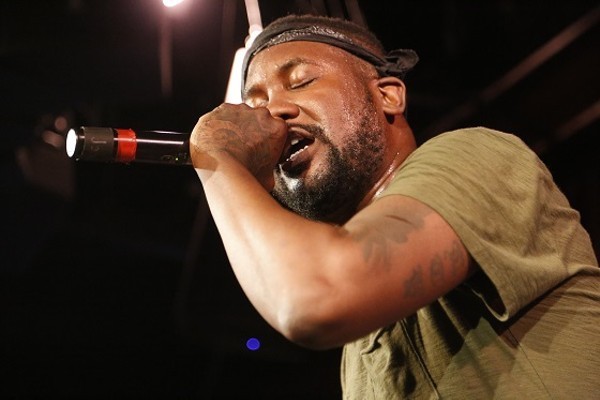 What St. Louis does and has done so well is provide this fast-moving undercurrent of independent acts with strong support from a bustling local scene of musicians. While big names may come in waves, what keeps artists coming back to town is the constant support from the ground up. Keep that foundation solid by going to at least one concert this weekend.

The next three days offer strong hip-hop and experimental events with an unbeatable string of folk and country shows. Get hip to the music culture of the river city.

Combsy w/ Owen Ragland
9 p.m. Kranzberg Arts Center, 501 North Grand Boulevard. $10-$13. 314-533-0367.
After a decade or so on the road with the Jacob Fred Jazz Odyssey, guitarist Chris Combs cooked up his own compositions for an inclusive and funk-fried jazz record. After plucking a cast of players from both his hometown of Tulsa, Oklahoma and New Orleans, Louisiana, Combsy was realized in full-effect. This tour follows a backed Kickstarter campaign for the record, bringing some clientele from the album's session to deliver a live set of Comb's studio vision. St. Louis-native Owen Ragland opens the show with his soulful brand of down-tempo electro-jazz, showing just why he's one of the FarFetched label's best exports, even at seventeen years old.

Jeremiah Johnson
5 p.m. National Blues Museum, 615 Washington Avenue. $10-$20. 314-925-0016.
By Roy Kasten
From Jeremiah Johnson Is One of This Year's STL 77:
If Jeremiah Johnson’s music were any greasier he could retire and open a one-stop soul food and oil change joint. The fully electrified blues and Southern rock of last year’s Blues Heart Attack belongs in the collection of any fan of contemporary guitar-slingers, though Johnson also has a killer way with honky-tonk shuffles and boogie woogie grooves, not to mention New Orleans-flavored dance-floor starters like “Everybody Party.” Yet for all the hot guitar work, in-the-pocket rhythms, and slinky organ and horn charts, it’s Johnson’s voice that makes him such a compelling performer and recording artist. His twang is lived, just like his blues, and he never sounds less than convincing.

Jessica Lea Mayfield w/ Blank Range
8 p.m. Off Broadway, 3509 Lemp Avenue. $15. 314-498-6989.
By Roy Kasten
You won’t hear a more searing and unsparing record this year than Sorry Is Gone, the latest release by Ohio-based songwriter Jessica Lea Mayfield. You don’t need the backstory, but in short: In 2014, Mayfield married a man that made her life hell, and after years of hiding the violence, continuing to tour and record and pretend the abuse wouldn’t last, she’s now free. A terrifying past cuts through her new songs — she rhymes “shotgun under the futon” with “not my idea of fun,” and that’s just for starters — but a present freedom roars through the spiraling guitars and the long, lingering release of her voice. "Been though hell, there's no telling what might happen in my future," she sings. "All I can do is be thankful for each moment that's my own." Mayfield made it out, and she’s never sounded more haunting and alive.

The Potomac Accord w/ Altamira, The Ottomen
9 p.m. The Heavy Anchor, 5226 Gravois Avenue. $7. 314-352-5226.
The percussive force behind the Potomac Accord's tricky indie rock is palpable, with beats that bob between subtle jazz and pointed post-punk. Leads come screaming out of the keys, commanding the trio's taut sound alongside wavey bass lines. That the band continues to chisel new shapes nearly two decades after its inception in 2000 is proof of Andy Benn, Joe Willis and Jerry Green's ability to explore and break new ground even in a genre where the sound is typically praised for its adherence to the beaten path.

Thanya Iyer w/ Dubb Nubb, Tonina Saputo
8 p.m. Foam Coffee & Beer, 3359 Jefferson Avenue. $7. 314-772-2100.
Thanyer Iyer and her band hit the river city on the home stretch of a two month tour through North America, a trip that's been in support of Do You Dream, an LP made possible with support from the Canada Council for the Arts. Iyer, a Montreal native, makes folk and prog collide with jazz as a happy mediator. Her songwriting employs a freight-train of melody — almost an aural attack that incites sensory overload — yet nuance and an ineffable sense of style keeps hooks from running awry. St. Louis' twin queens of twee in Dubb Nubb support the show alongside the ethereal Tonina Saputo.

AJJ
8 p.m. Off Broadway, 3509 Lemp Avenue. $15-$17. 314-498-6989.
Behold the lords of American folk punk, Andrew Jackson Jihad. Except the band shed that moniker in late 2016, tightening its name to the abbreviated AJJ, a term coined by its fans in much the same way Dave Matthews Band is affectionately called DMB. AJJ's public statement went about the way one might expect from the twang bangers: "1.) We are not Muslims, and as such, it is disrespectful and irresponsible for us to use the word jihad in our band’s name. 2.) We no longer wish to be a living reminder of president Andrew Jackson. Interesting historical figure as he was, he was an odious person and our fascination with him has grown stale."

Blitzen Trapper
8 p.m. Blueberry Hill - The Duck Room, 6504 Delmar Boulevard. $17-$20. 314-727-4444.
Despite a name fit for a Viking metal band, Blitzen Trapper is a non-Nordic country outfit from the less than barbaric land of Portland, Oregon. Its label pedigree sums up the group's crosshatch of alt-folk, bouncing from Sub Pop to Vagrant with overseas support from British label Lojinx (also known for exporting Butch Walker and Nina Persson). This year's Wild and Reckless is an exploration of the band's backlog through an Instagram filter called "post-apocalyptic," as if there were such a thing. It's a loosely-connected dystopian romp that offers up recreations of old songs with fresh compositions working as the glue.

Planned Parenthood Benefit Show w/ Bagheera, Syna So Pro, The Pat Sajak Assassins, The Goes, DJ Vinca Minor
8 p.m. The Heavy Anchor, 5226 Gravois Avenue. $7. 314-352-5226.
From the loop-based Syna So Pro to Bagheera's grit and grunge, this benefit colors the Heavy Anchor with all shades of subversive St. Louis. The Goes' gloomy set of post-punk is a moody punch to the gut, offering an airy alternative to Pat Sajak Assassin's dense and proggy songs. Even without the charity at its epicenter, this show provides diversity in both substance and style.

Poe Fest 2017
8 p.m. 2720 Cherokee Performing Arts Center, 2720 Cherokee Street. $15-$20. 314-282-8017.
By Daniel Hill
Tef Poe doesn't spend as much time in St. Louis lately as he used to. The local rapper / activist / former RFT columnist, whose profile rose considerably due to his status as a frequent front-line protester following the killing of Michael Brown in Ferguson, has found himself in the Boston area more often than not lately. There's good reason for that: a little school named Harvard University. This year, Tef was named as a recipient of the 2017-2018 Nasir Jones Hip-Hop Fellowship (named after and founded by legendary rapper Nas) — one of only three people to receive the honor. Tef presented a colloquium at the school on "Culture Shock and the Black American Experience" on October 25 — introduced by no less than Cornel West. But just because Tef's a certified academic now doesn't mean he will be laying down the mic and quitting rapping any time soon. On the contrary, this homecoming show should serve as proof positive that the artist is still at the top of his game. This year's Poe Fest will be headlined by no less than Project Pat — be sure to stick around until the end for a brain-rattling performance from a southern rap legend.

Yowie w/ Yautja, Pyrrhon, Van Buren
8 p.m. Foam Coffee & Beer, 3359 Jefferson Avenue. $7.314-772-2100
By Christian Schaeffer
From Yowie Is One of This Year's STL 77:
Listen: You’re either gonna love Yowie and marvel at the instrumental trio’s prowess with producing tones, textures and rhythms that seemingly don’t compute, or you’re gonna cross the street to avoid them. There’s little in between, and that’s OK with Yowie. The band’s brand-new LP, Synchromysticism, conjures a lot with two guitars and a drum kit, and drummer Shawn O’Connor sees the album as a continuation of the band’s seventeen-year evolution. “I think a lot of our music in the past was ‘intellectually interesting’ whereas [this time] we really went for emotionally evocative,” says O’Connor. “We wouldn’t allow the seams to be conspicuous; we wanted to sand them down and make it look like one continuous process.”