U2 Is Trying to Come Back to St. Louis, Must Be Stopped 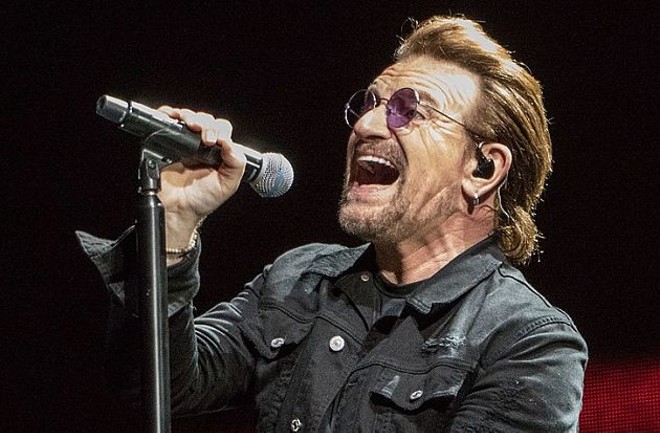 In the midst of the protests that have rocked the St. Louis area since former police officer Jason Stockley was found not guilty of murder in September, there have been high and low points for both protesters and police supporters — times each would point to as ones of great turmoil and times they'd tout as tremendous triumph. And while there is little common ground between those who are pro-protest and those who are not, there has been one shared victory:

At least we didn't have to deal with Bono, the most pretentious of all mononymous artists (no small feat), spouting some inane, sanctimonious, wholly unhelpful and entirely uninformed claptrap about our city's turmoils from a St. Louis stage.

To be clear: Celebrities using their positions to speak about social injustices is a good thing! Those who have access to large megaphones should use them to speak out and educate on society's ills when they can. Even the "shut up, liberal Hollywood" crowd should be able to get on board with that — after all, the president those folks recently elected is best-known for pretending on TV that fake things are real (and that was even before he was elected into office).

Just please, for the love of god, not Bono. Anyone but Bono.

When U2's September 16 concert was cancelled, one day after the Stockley verdict, several parties pointed fingers at one another. U2's statement said the band had "been informed by the St. Louis police department that they are not in a position to provide the standard protection for our audience as would be expected for an event of this size." Naturally, police supporters blamed the protesters for the lack of resources; protesters countered that it was literally the police themselves who actually cancelled the concert, not them.

Rather than arguing, they should have called a temporary truce for universal high-fives.

Bono, for his part, responded to the cancellation by drawing the worst fucking picture of the St. Louis skyline of all time and promptly flying back to LA, where he was seen that very night dining at a trendy West Hollywood restaurant that sells cheeseburgers for $22 a pop.

Deeply saddened at what has happened in St. Louis and having to cancel our show tonight….I found myself reading Dr. King’s speech from the National Cathedral and asking myself is this 1968 or 2017? - Bono “Human progress never rolls in on the wheels of inevitability….we are coming to ask America to be true to the huge promissory note that it signed years ago. And we are coming to engage in dramatic nonviolent action, to call attention to the gulf between promise and fulfillment; to make the invisible visible.”

"Deeply saddened at whyt hagdj ejkk st louis andhjejn to blah blah blah" — he couldn't even be bothered to write legibly; there was probably turbulence on his private jet or something as he raced away from Missouri back to the hills of Hollywood as fast as humanly possible.

Worse still is the fact that his statement didn't actually say anything — par for the course with Bono. "Deeply saddened" and an MLK Jr. quote: Possibly the most cliched, white-bread response humanly possible. Bono deftly walks right down the middle while still giving off a self-important, messianic air. Nothing that could affect album sales, heaven forbid. It's exactly the kind of crap we would've heard had he hit the stage, only there he would have dragged it out for twenty minutes or so.

This is not, we can surely agree, what our city needs — in this fraught time or indeed in any time.

Now, we'll grant you that U2 fans did miss out here. They weren't going for the piety, but rather for the love of anthemic, slightly off-kilter rock music played by a guy who calls himself The Edge. Still, the band's newly announced St. Louis show, scheduled for May 4 at Scottrade Center, will do little to heal the wounds they've suffered.

You see, the cancelled concert was a part of the band's Joshua Tree tour, celebrating the 30th anniversary of what we are willing to concede is U2's best album. For fans, missing that is surely a bummer — but ask yourself: Would witnessing that album's 50 minutes total run-time performed live truly have been worth sitting through the useless and uneducated platitudes about St. Louis' ills that would have inevitably poured out of Bono's big fat mouth?

Maybe you answered "yes" — maybe you have a high tolerance for bullshit. Kudos to you, but we got bad news: This new U2 date is part of the band's eXPERIENCE + iNNOCENCE tour, focusing on material from its last album and its forthcoming album — which, we'll go out on a limb here and say, are not U2's best.

You may remember Songs of Innocence as the record for which U2 and Apple teamed up to ruin everyone's lives when the album was automatically pre-loaded into 500 million iTunes accounts without the knowledge of its users. It was spam, junk mail on a mass scale, music utterly unwanted and wholly devalued. Plus it wasn't even good: so bad, in fact, that it was nominated for a Grammy (eww).

You can't remember Songs of Experience — it hasn't come out yet. But with such a vivid and colorful name it's sure to be a winner, right? Right?

No. And so it is time to unite, St. Louis, as we never have before. We must not let Bono assault our senses and insult our common sense with a mind-numbing, endless speech about "coming together" and "unity" and "healing." Not in St. Louis. Not on our watch.

Maybe we can't all agree on police brutality and accountability for bad cops — but surely we can all agree on this.