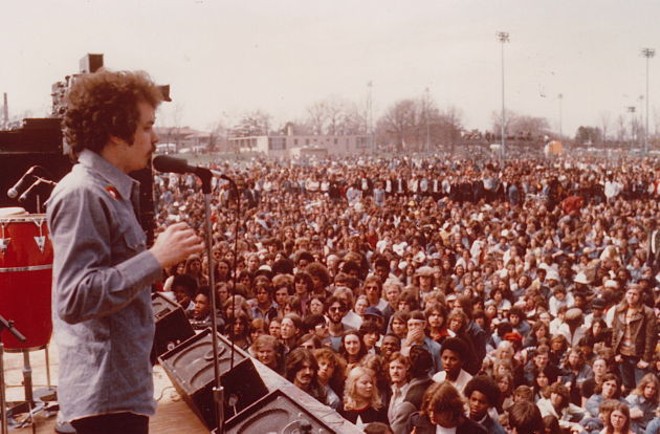 During the early days of KSHE 95, DJs were able to set the mood of their shift, in part, through the use of a large lamp sitting on the console. As programmers rolled in for a shift, they were able to manipulate that lamp's brightness in order to hit just the vibe they wanted in the air studio. For several decades, this humble lamp, looking like a refugee from a church jumble sale, was only known to a few intimates of the station.

Ron Stevens, an afternoon drive-time host at KSHE from 1968 to 1976, is offering the rabid KSHE audience a fulfilling, nostalgic love letter in the form of Never Say Goodbye: The KSHE Documentary, a 94-minute work that exhaustively covers the station’s earliest days. It debuts Wednesday, November 1 at the Moolah, with an evening that will feature appearances by a number of the early jocks that helped define the station’s sound. A few of them even had a laugh with Stevens about the aforementioned lamp.

In an amusing, entertaining, half-hour conversation, Stevens admits, “It’s interesting that you mention the lamp. There were a few people in the film who mentioned that, how much time we spent discussing the lamp. But notice everyone talking about it! That lamp meant something to every guy on the air; it was symbolic, as Ted Habeck said. Because ours was a relaxed, fun presentation. Not the typical, high-powered radio broadcasting approach of that time. And that lamp helped set the tone.”

It’s Stevens’ ability to luxuriate in the details that makes Never Say Goodbye such a fun view, full of rich bits of St. Louis music history, with KSHE, obviously, central to the narrative. Stevens, too, as the co-producer/director/editor/writer of the film is key, helping to drive the piece as the tale’s narrator. Unsurprisingly, his wife and longtime creative/professional partner, Joy Grdnic, is also featured — she hosted KSHE’s morning drive show Joy in the Morning beginning when she was just a teenager.

Knowing that KSHE was steaming toward its 50th anniversary as an album-oriented rock station, Stevens knew the time to create a film about its birth had a natural deadline. In September 2016, he "made the commitment to do this" he says. "I started staying it out loud, which is the first step to getting started. Then people started suggesting others for the team,” including co-producer and director of photography Jack Twesten.

Securing his key technical personnel, Stevens approached the station, which provided him some archival material, with the proviso “that it had to meet their minimum technical standards.”

Along the way, Stevens collected 38 hours of shot material from 44 interview subjects, which he painstakingly transcribed in preparation for the editing phase; included is novelist Bill Addison, the very first voice on the air in 1961, during its pre-rock & roll days — alongside a host of former jocks. 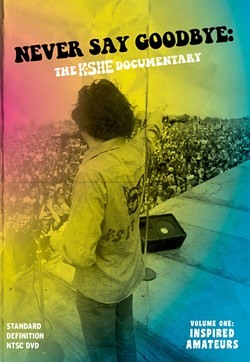 Among the other dozens-strong interviewed was former DJ Joe “Mama” Mason. With Stevens’ work focusing on the station in the ‘60s and ‘70s, Mason just barely slipped in, having joined the station in 1979. While he departed to another local station for a six-year stint in 1987, Mason says, “for most listeners’ collective memories, my entire rock tenure of fifteen years all defaults back to KSHE.”

A longtime commercial/broadcast producer with an extensive, national list of credits, Mason joined the station young, as almost all of the DJs were when hired on by then-general manager (and father figure) Shelley Grafman. But unlike others — including Stevens, who was booted off the air during his first-hour of KSHE broadcasting, only to be hired to a weekend stint a year later — Mason arrived as a rarity: a guy with actual air experience.

“I was always on the air as a disc jockey, although I also did some commercial and promotional production when I was putting myself through college,” Mason says. “Even though I was only nineteen when I started, I had already been working in the radio industry since I was sixteen. I moved out at seventeen, and had worked on-air at KCFM (93.7 FM) when I was eighteen, so I came to the station as a ‘working professional,’ unlike most of the other guys, many of whom were hired right out of high school and started sweeping floors or digging ditches, and then worked their way up to an on-air position.

“KSHE was an under-funded, ‘what you see is what you get’ operation,” he adds. “The building itself even looked like kids took over a storage shed of the 66 Drive-in and made themselves a radio station that was staffed by... well, kids themselves. I started at nineteen; others at eighteen or even seventeen. The oldest on-air staffer was maybe 26. So there was a lot of trust, and a lot of self-identification with the DJs.”

That feeling, Mason says, accounts for why so many young folks gravitated toward the station. And why so many of them still dig the its brand, even if it’s a very different animal today.

“KSHE stood for rebellion,” he says. “Rock was fun, loud and often talked about drug usage, partying, disrespect for authority, dislike for school, etc. And our parents hated it, which made us like it even more. It wasn’t at all a station for adults. It was for kids. Kids back then were different from today’s kids, but they were still kids.”

As for the kids on the air, many of them tell similar stories: how their first shift, or two, involved nerves so severe that they didn’t know if they’d make it through. The responsibility given by Grafman suggested that “somehow we knew that since he’d given us this autonomy, we had to figure this out ourselves. Here you had disc jockeys sixteen to nineteen years old, running a radio station. And by 1976, it was known around the globe.”

Attrition happened: DJs left for other stations, pursued careers in other forms of media; many were sacked and rehired by Grafman, who was always listening, a phone call away.

“All of us had been there,” Stevens says, “part of the ‘second chance club.’ You come back, say ‘I’m sorry,’ and within two weeks, you’d be back on the air. We were young and when we screwed up it meant more than just standing in the corner. You were taken off-air, you were told, ‘You shouldn’t have done that.’”

Insider stories like this fill the documentary, which, like the station itself, Stevens believes will find an audience.

“There’s this connection you feel, this shared history with the station,” he suggests. “It’s something that listeners are very curious about.”

Stevens notes that the film’s subtitle of “Inspired Amateurs” and its cryptic “Volume 1” tag is intentional. For him, telling the story through the ‘70s was the mission of Never Say Goodbye — but there’s plenty of material for a continuation of the KSHE story.

“I used that ‘Volume 1’ line as a challenge to whoever tells the story of KSHE in the ‘80s,” Stevens says. “It’s a great story, too, but not a story for me to tell.”

The story of that lamp, meanwhile? That's all Stevens'.