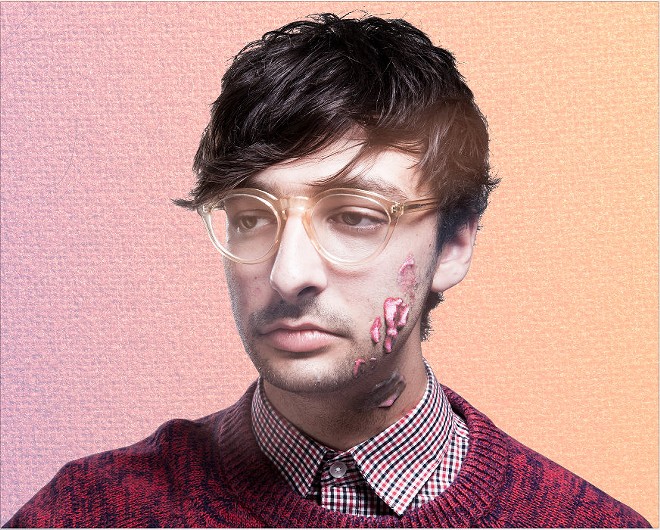 Between the Blind Eyes reunion and the 40+ band DougFest, the next three days showcase beloved local bands of the past, present and likely future. The Sinkhole on South Broadway offers a strong weekend ahead with the Breakmouth Annie/Two Houses split release party on Friday and a homecoming show for metal outfit Fister on Saturday.

For those who prefer the flow of the mainstream, Janet Jackson hits the Chaifetz Arena and Fall Out Boy plays Scottrade Center alongside Jaden Smith. Read on and decide how deep you want to dive.

Breakmouth Annie/Two Houses Split Release Show w/ Hospital Job, Horror Section
8 p.m. The Sinkhole, 7423 South Broadway. $7. 314-328-2309.
Courtesy of Do What? Records, the new Breakmouth Annie/Two Houses split glues the two caffeinated bands with songs that toe the line between power pop and heavy, heady rock. Any rough edges present are purely by design, bridging the gap between solid and sensible songwriting and the frenzied aesthetic of basement punk — not that the two are mutually exclusive. The whole bill is steeped in punk, with Horror Section being the most seasonably appropriate, of course.

The Wirms w/ Molasses Disaster, Sunwyrm, Big Whoop
8 p.m. Foam Coffee & Beer, 3359 Jefferson Avenue. $7. 314-772-2100.
If the Wirms' 2017 tape Make America Squirm Again seems a bit on the nose, its front cover depicting Trump's head atop a crudely drawn worm should be a kick to the face. To wit, the Fayetteville, Arkansas duo makes a sordid set of punk that feels confrontational with its blown-out riffing and lumbering but hard-hitting beats. Forget tinnitus, this sound slithers in and starts to feast on your frontal lobe.

The Blind Eyes Reunion Show w/ Justin Johnson, William Godfred, DJ Chris Bay
9 p.m. RKDE, 2720 Cherokee Street. $10. 314-282-8017.
By Christian Schaeffer
From The Blind Eyes Are Back for a Good Cause: A Friend's Daughter: Six or seven years ago, a pair of St. Louis rock bands forged a friendship based less on a similar sound and more on the members' personalities and shared, sardonic sense of humor. The Blind Eyes, which began as a nervy garage-pop trio, and Kentucky Knife Fight, a quintet that mixed bar-band blues with dark-hearted aggression, found themselves sharing in-town bills and a few out-of-town tours as both groups carved out space in the local music scene. Their friendship culminated in three years' worth of New Year's Eve parties at Off Broadway, where the bands combined powers to cover hits by the Smiths, the Beastie Boys, R.E.M. and more. Both groups called it quits a few years back, but this weekend the Blind Eyes are reuniting for a one-night-only performance — and once again, Kentucky Knife Fight is involved. The show is a fundraiser in benefit of research for Epidermolysis Bullosa (EB), a rare disease that leaves those affected with severely fragile skin that is prone to a near-constant state of blisters and wounds. Two-year old Rowan Holler has EB, and her parents — former Kentucky Knife Fight singer Jason Holler and his wife Kate — shepherd their daughter through a regular routine of wound-dressing, doctors' appointments and around-the-clock care to protect her fragile skin.

Fall Out Boy w/ Jaden Smith
6 p.m. Scottrade Center, 1401 Clark Avenue. $27.50-$67.50. 314-241-1888.
Fall Out Boy laid the blueprint for the bridge between pop punk and emo in the mid-aughts, using its breakout single "Sugar, We're Goin Down" as a proof of concept that many would follow. Sure, Fall Out Boy might not need an introduction but neither does its opener Jaden Smith. 2017 has been a good year for the rapper/actor/humanitarian/Batman-cosplayer who starred in Netflix anime series Neo Yokio and released the single "Watch Me" ahead of upcoming album Syre. Strange that, already at age nineteen, Smith is light years beyond being an up and comer.

Fister w/ Un, Suicide Dive, Dear Satan
7:30 p.m. The Sinkhole, 7423 South Broadway. $8.
This homecoming show for Fister sees the prolific doom trio return to St. Louis with tourmates Un in tow. Both bands take an experiential approach, using volume to permeate the skin, literally making the songs a physical experience. Fister moves at such a speed that its dense tone offers an abyssal sound to wander in while each beat acts as a pathway through what might otherwise feel endlessly expansive. The band's nearest neighbor might be drone or harsh noise, and luckily the local lineup offers just that with Dear Satan.

Janet Jackson
8 p.m. Chaifetz Arena, 1 South Compton Avenue. $29-$125. 314-977-5000.
The shape of Janet Jackson's 2017 tour dramatically changed after the birth of her first son (which Jackson delivered at an astounding age 50) and subsequent divorce from Wissam Al Mana. Now the State of the World Tour reaches not from 2015's Unbreakbale but Jackson's entire discography, pulling specific songs that deal with issues of systemic racism, domestic abuse, police brutality and other injustices.

Palm w/ Girlpool
8 p.m. Off Broadway, 3509 Lemp Avenue. $13-$15. 314-498-6989.
While Palm technically supports Girlpool on this tour, the Philly outfit has become a stand-out for its jagged, indie rock-induced fever dream. Sordid riffing comes out clean with crystal clear tone and the mostly linear drumming dresses those melodies with a jazzy vibe. The band maintains an uncompromising sense of flow as percussive basslines elevate the guitars, which serve up live stereo panning as more than just a parlor trick. Soft crooning mingles with soulful howling from the gut, making for a vocal duality that only adds to the band's aural density. The songs are a dialogue on stage with actors sticking to a script made to feel like a freely flowing conversation.

Whoa Thunder w/ Karate Bikini
5 p.m. Das Bevo, 4749 Gravois Avenue. Free. 314-832-2251.
By Evan Sult
From Whoa Thunder Is One of This Year's STL 77:
If aliens ever land in St. Louis, à la Rick and Morty, and demand we produce one pop act to represent Earth in an intergalactic battle of the bands, we can all breathe a sigh of relief: They came to the right place. Brian McClelland’s Whoa Thunder is a pop prodigy project — songs like “Bottlehands” and “No Girls Laugh at Me Now (HA HA I Laugh at Them)” are equal parts Newman and Numan, bristling with New Wave synths and high-caliber pop chords. Like all truly great pop, it simply overwhelms any potential objection by leaping right over the rational mind to stomp on your lizard brain’s repeat button. Luckily for us all, the lyrics keep up with the rest, so when you find yourself still singing, “Allison left school today for the outer planets’ charm” days later, at least it’s not “Poker Face.” Take that, Cromulons!