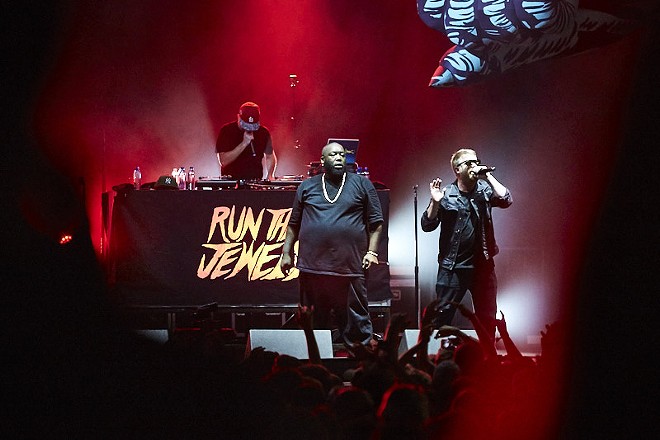 When Run the Jewels last performed in St. Louis, everything was different.

It was the night of November 24, 2014. St. Louis county prosecutor Bob McCulloch had appeared on television a few hours before the hip-hop group hit the Ready Room's stage, announcing that there would be no charges in the killing of Mike Brown by Ferguson police officer Darren Wilson. Business owners closed up shop all over St. Louis, boarding up windows in anticipation of unrest.

Run the Jewels and the Ready Room's owners, on the other hand, decided that the show absolutely must go on.

The trio of Killer Mike, El-P and St. Louis' own Trackstar the DJ took the stage close to 11 p.m. that night, sans soundtrack. Killer Mike, in a fiery speech that would go viral by the following morning, explained:

"We usually come on to Queen's 'Champion,'" he said. "And I just gotta tell you today, that man, no matter how much we do it, no matter how much we get shit together, shit comes along that kicks you on your ass, and you don't feel like a champion. So tonight, I got kicked on my ass when I listened to that prosecutor."

Through tears, Mike shared his fears for his own sons, invoked Martin Luther King Jr. and spoke of his deep friendship with his fellow Run the Jewels MC, El-P. Addressing society at large as he gestured to El-P, he said, "We know you don't value my skin, and we know you do value his, but you know what? We're friends and nothing is gonna devalue that."

It was powerful and moving, and it was only the start of a set that would serve as a cathartic release for all in attendance, a group banded together in a city in turmoil.

But on Sunday, on LouFest's Enterprise Stage, things felt different. Based on their entrance music, Mike and El and Trackstar did feel like champions on this run.

"We are so happy to be in the home of everybody from Tef Poe to Nelly, MO, and we wanna say we came to burn this stage to the motherfucking ground," Mike said at the outset, to deafening applause.

"The last time we were here was under different circumstances," El-P would remark later. "This time feels a little bit lighter."

Still, the outspoken group wasn't going to let the evening pass without sharing some thoughts on the events that informed their 2014 performance. About three-quarters of the way through a tightly executed set, Mike again addressed the crowd.

"Usually at this point in the show we talk about bullshit politicians and how public policy fucks us all over, and how no matter [what] race, creed, color or class, we should be unified against the liars, stealers and the cheaters," he said, referencing the group's song "Lie, Cheat, Steal" from Run the Jewels 2. "But tonight instead of going on a rant and giving them that attention through hate, we really wanna express a song that we wrote out of love and empathy and care for people.

The subject matter in "Early" is undeniably heavy, a tale of police brutality that ultimately leaves a woman dead in front of her family.


And I apologize if it seems like I got out of line, sir 'cause I respect the badge and the gun / And I pray today ain't the day that you drag me away right in front of my beautiful son / And he still put my hands in cuffs, put me in the truck when my woman screamed, said “Shut up” / Witness with the camera phone on saw the copper pull a gun and put it on my gorgeous queen / As I peered out the window I could see my other kinfolk and hear my little boy as he screamed


The fact that the group took the time to dedicate a song about police brutality to Mike Brown pretty much says it all about where its members are coming from. Even at a breezy festival show packed with thousands of fans, even when the day calls for feeling like a champion, Run the Jewels isn't afraid to get political or speak about matters of inequality.

Even when everything is different, some things are still the same.

Watch the video for "Early" below: