The 10 Best Concerts in St. Louis This Weekend: September 8 to 10 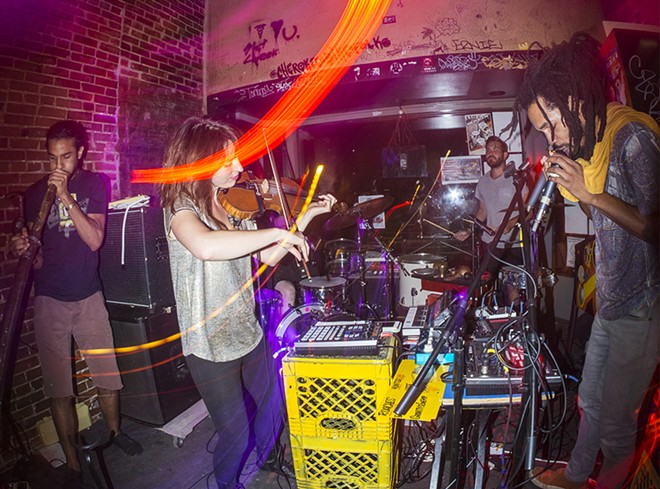 X-Mas in September hits St. Louis with three festivals tailored to most of the city's show-going population. LouFest descends on Forest Park with the likes of Snoop Dog, Run the Jewels and more while the Wayback edition of Pointfest offers a nostalgic power-trip at the Hollywood Casino Amphithreatre on Sunday.

Those who prefer to dig a little deeper into underground music should look into Pü Fest over at 2720 Cherokee Street. Here's your guide to the weekend ahead with both over-hyped and low-key shows in tow.

Dryjacket w/ Sundressed, Ben Diesel, Young Animals, Name It Now
7 p.m. Fubar, 3108 Locust Street. $12. 314-289-9050.
The twenty-somethings in Dryjacket might take umbrage with being called emo, but its smart and succinct songs no doubt take from both the genre's early '90s heyday and the more modern bearers of that torch. That these Jersey boys opt for glittery, finger-tapping leads while managing strong, chiseled vocals is a credit to their spacial songcraft. Little is left to the imagination with Dryjacket, who boast an artfully bare brand of indie rock.

Lee Ann Womack w/ Alan Jackson
7:30 p.m. The Family Arena, 2002 Arena Parkway, St Charles. $45-$105. 636-896-4200.
By Roy Kasten
Lee Ann Womack isn’t just the finest living country singer; she is among the genre’s most savvy song selectors. “I Hope You Dance” may have been a no-brainer, but since that record, Womack has turned to Nashville’s finest left-of-center songwriters – Julie Miller, Natalie Hemby, Chris Stapleton – while occasionally slipping in her own smartly co-written material that give her albums a shimmering, timeless quality, whether she’s exploring more pop sounds or, as on her forthcoming The Lonely, The Lonesome & The Gone, a smoky, bluesy feel. Her voice, warm and clear as an Indian summer morning, always finds its way to the emotional core of a great song.

Shady Bug w/ Aquarium, Switch, Sea Priestess, BlackBodyHeat
9 p.m. RKDE, 2720 Cherokee Street. $7. 314-282-8017.
With wiry leads that slink under singer Hannah Rainey's effectual voice and a sturdy rhythmic base, Shady Bug offers up a duality in its songs. When isolated, the heft of the guitar seems at odds with the band's buoyant parts, but the full band's approach to opposing melodies builds strong emotional arcs. As indie rock, emo, folk and waves of singer-songwriters melt together in the mainstream, Shady Bug keeps its assets just weird enough to concoct a timely and distinct set of songs. Ticket holders for this weekend's PuFest will get in for free, as this doubles as a kick-off party for the grassroots event.

Dave Stone Jazz Ensemble
5 p.m. Das Bevo Biergarten, 4749 Gravois Avenue. Free. 314-224-5521.
Dave Stone's stature in St. Louis music certainly precedes him, what with nearly two decades worth of awards from this very publication, among others in town. Yet those accolades rarely, if ever, mention his role in the more subversive circles of noise and free-jazz. His work on the sax has made him, regardless of band or affiliation, an omnipresent force in the midwest. That he can hold down a residency at Mangia Italiano for seventeen years running or maintain top billing as a player for many heavy-hitting songwriters speaks to his distinct, versatile style. This night offers Stone alongside an expansion of his classic Trio with a low-key affair inside Das Bevo's newly christened biergarten.

Pü Fest 4 w/ Larva Lu, Eric Donte, Jane Wave, Lavender Country, Pryss, Nika Marble, Yowie, Darin Gray, Collin Gorman Weiland, Matchess, Anwar Sadat, Blvck Spvde, Royal Brat, Abdu Ali, Minority Threat, Crown Larks, Marbelle, Supersonic Piss, Joan of Dark, Gel Set, The Funs, The Strange Places, Violence Creeps, Druj, G.N.A.T., Staghorn, Profligate, RA Child, Glued, The Knuckles
Sat., Sept. 9, 4 p.m. and Sun., Sept. 10, 4 p.m. RKDE, 2720 Cherokee Street. $20-30. 314-282-8017.
Pü Fest might have seemed like a low-key rip on LouFest back in 2014, but its evolution in the last three years reaches far beyond a hackneyed parody. Festival founder Luc Michalski (also an operations manager for 2720, RKDE and Blank Space) has worked to provide an intimate setting for concertgoers to see both local and touring acts alike with a lineup that is hard to pigeonhole. Past performers have been featured on the hallowed blogs of Pitchfork and Noisey and that's sort of the point with this weekend. Do you pay top dollar for mainstream favorites or would you rather wade in the undercurrent of subversive sound?

The Toadies w/ Local H
8 p.m. Delmar Hall, 6133 Delmar Boulevard. $22.50-$25. 314-726-6161.
The Toadies's hardest hitting single may have dropped in the early nineties with "Possum Kingdom," a song that wouldn't sound out of place if released today, but the band has been something of a grunge rock workhorse with solid output and touring ever since (save for a lull in the mid-aughts). This night is essentially a release show for the new album The Lower Side Of Uptown, coming out only the day before on September 8.

Syna So Pro w/ Whiskey Autumn, Party Dress
9 p.m. Foam, 3359 South Jefferson Avenue. $5. 314-772-2100.
By Evan Sult
From Syna So Pro Is One of This Year's STL 77:
Syna So Pro can be a profoundly disorienting experience, especially if you catch the one-woman band behind the moniker doing songs from her current album, Vox, composed entirely for voice. But “voice” sounds so singular, and Syrhea Conaway is so multiple, thanks to her looping pedals — she may start with a simple, spoken “boom boom kick, boom kick,” and soon she’s backed by lush, complexly shifting choral arrangements that include everything from soprano to bass (represented by her own octave-shifted voice). It spins from absurdly ambitious into delightfully unreal with “Fengyang Song,” a Chinese folk song, sung in the Mandarin dialect, that uses syllables and tones you’ve probably never encountered. Live, it’s sometimes like watching one person try to sail a three-masted galleon, but that’s part of the appeal. In seeing the effort, especially when something goes awry, we’re engaged by just how beautifully impossible the task is.

Jeremiah Johnson
4 p.m. National Blues Museum, 615 Washington Avenue. $10-$15.
By Roy Kasten
From Jeremiah Johnson Is One of This Year's STL 77:
If Jeremiah Johnson’s music were any greasier he could retire and open a one-stop soul food and oil change joint. The fully electrified blues and Southern rock of last year’s Blues Heart Attack belongs in the collection of any fan of contemporary guitar-slingers, though Johnson also has a killer way with honky-tonk shuffles and boogie woogie grooves, not to mention New Orleans-flavored dance-floor starters like “Everybody Party.” Yet for all the hot guitar work, in-the-pocket rhythms, and slinky organ and horn charts, it’s Johnson’s voice that makes him such a compelling performer and recording artist. His twang is lived, just like his blues, and he never sounds less than convincing.

Wayback Pointfest w/ Sublime with Rome, the Offspring, the Urge, Goldfinger, Reel Big Fish
4 p.m. Hollywood Casino Amphitheatre, 14141 Riverport Drive, Maryland Heights. $25-$89.85. 314-298-9944.
By Daniel Hill
It’s interesting that the Point decided to schedule this year’s Wayback Pointfest on the same day as LouFest’s second day, but on reflection, it kinda makes sense. The people that are interested in the bands on this bill — Sublime with Rome, the Offspring, Reel Big Fish, the Urge, Goldfinger — probably have no time or interest in the music the kids these days are listening to anyway. These are folks who grew up with chain wallets on their hips, ball chain necklaces adorning their necks, bleached-blonde highlights in their spiked hair. They can skank a circle around you, even if they have no idea what “dabbing” is. They will be more than content to immerse themselves in the pop-punk and ska sounds of the late nineties. This is their day to shine.