The 10 Best Concerts in St. Louis This Weekend: August 4 to 6 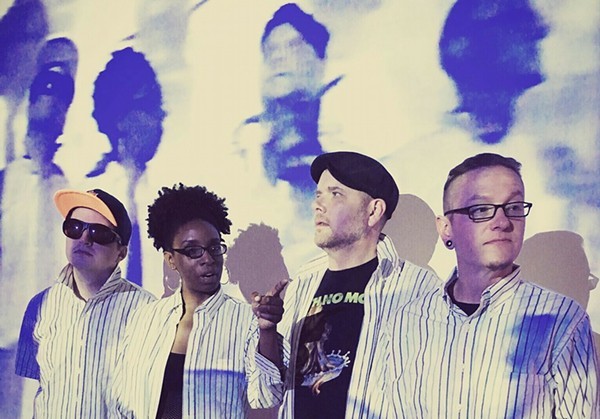 The Open Highway Music Festival and the Burbs Music and Art Fest plant a big exclamation mark on a packed weekend that offers a hip-hop showcase, a legendary noise act and the return of glam legends Faster Pussycat. Of special note is the Railhazer in-store performance at Vintage Vinyl, which celebrates the doom band's debut album.

We know it's ho-hum to bring up the weather, but this break from the heat will be brief so go to a show and soak up the breeze between bands.

Breakdancing Ronald Reagan w/ Clark Nova, Oblive, Kingston Family Singers, Monster Sized Monster, Bitch Fit
9 p.m. The Way Out Club, 2525 South Jefferson Avenue. $5. 314-664-7638.
Most music we call "experimental" doesn't quite fit that descriptor. For one, most performers don't introduce variables that could potentially lead to failure or an unwanted outcome. Austin-native Jonathan Cash likely hasn't given that much thought as he's too busy crafting choice cuts such as "Mario Kart Is My Dick" and "Man! I Feel Like A Woman!" As Breakdancing Ronald Reagan, Cash has not only graced many a flyer with one of the best names in history, he's also spent more than twenty years giving exactly zero fucks. Arrive on time for a live primer on St. Louis' expansive noise scene.

Faster Pussycat w/ Witch Doctor
8 p.m. The Ready Room, 4195 Manchester Avenue. $20. 314-833-3929.
Save for a lost decade in the '90s, Faster Pussycat has remained a stalwart force of metal, like a crystallized capsule of glam and masculine riffing. For all the band's inner conflicts, of which a quick Google search can reveal all the saucy details, any live show at all is a tiny, toxic miracle. Its last studio effort The Power and the Glory Hole wasn't for everyone (longtime fans included) and the name should be enough to ward off plenty of people, but Faster Pussycat is unaffected by such things — for better and for worse.

Railhazer
7 p.m. Vintage Vinyl, 6610 Delmar Boulevard. Free. 314-721-4096
A record store performance might not seem optimal for brooding sludge metal, but Railhazer has long proven its brand of doom in several locales. To celebrate the release of its debut LP The Null And The Void, the band opts to peel the paint off the walls of a St. Louis institution. Not only is the show free, but attendees are given additional incentive with free Schlafly beer until the well runs dry.

Backpacks And Dufflebags w/ Eastside Eazy, Re-Ack, Lou Kang, MBz, Riley B, Gritz Hoffa, Dante Wolfe, Trapstar, Nigel Lamont, Plot the Big Homie, RUDEcrew, Jay Maeyoh, Doe 'Reido, DJ Pharaoh, Finsta, Rob Boo
8 p.m. 2720 Cherokee Street. $10. 314-276-2700.
"Conscious" might not be the first word that comes to mind when trap is brought up but hip-hop as a whole has always been about the mix-up. This night offers up a filling of the gaps, so to speak, bringing more than ten acts with DJ Pharaoh acting as the glue to bind them all together. The rappers here span a range of age and experience, bringing different perspectives in addition to the mash-up of sub-genres. Hip-hop in STL feels unified, thanks in big part to shows such as this.

Berry w/ Town Cars, The Leonas
8 p.m. Foam, 3359 South Jefferson Avenue. $5. 314-772-2100.
Joyful Noise Recordings should be a familiar name to fans of Joan of Arc, Kishi Bashi and Lou Barlow, but behind every hip label and its hyped roster is a number of smaller workhouse bands. Berry is one such outfit that, back in 2010 before Melvins side-projects and Deerhoof residencies, put out a stellar record through Joyful Noise to high praise. The once Chicago-based band is now scattered across the country, reconvening only for a stray tour or rare studio session. Yet songwriter Joey Lemon has kept the group glued together with what he calls "yearly musical vacations," and Berry's latest album Everything, Compromised is proof positive of its art rock sound first established in the early aughts.

Foxygen w/ Twin Peaks, Sleepy Kitty, Essential Knots
3 p.m. Off Broadway, 3509 Lemp Avenue. $20-$23. 314-773-3363.
From St. Louis' own Sleepy Kitty to the indie rock royalty of Twin Peaks, any band on this bill could be considered a headliner. For many, Foxygen's big band take on psychedelic rock will no doubt be the dark horse show of the year. Jonathan Rado and Sam France are tonal rock alchemists, forging ahead with a new standard for on stage chemistry while weaving a pop-infused tapestry of contemporary classics. As an aside, check out this video of Tim Heidecker (of Tim & Eric fame) reducing the brains behind Foxygen to a nervous, meager mess.

Chris Stapleton w/ Margo Price, Brent Cobb
7 p.m. Hollywood Casino Amphitheatre, 14141 Riverport Drive, Maryland Heights. $30-$180. 314-298-9944.
By Roy Kasten
Chris Stapleton is as far from bro-country as Taylor Swift is from Emmylou Harris, but he owes that scourge a round or seven. After proving his musical chops in bluegrass powerhouse the Steeldrivers and establishing himself as one of Nashville’s most reliable songwriters – King Bro Luke Bryan even scored a hit with the Stapleton-penned “Drink a Beer” – the coalminer’s son tapped into a latent thirst for a star who didn’t look or sing like an asshole at a Georgia State frat party. Stapleton may seem like an unlikely country hero, but the bluesy Southern soul of his music and the harrowing wail of his baritone voice have proven, against all current trends, irresistible.

Jidenna
8 p.m. The Ready Room, 4195 Manchester Avenue. $20-$23. 314-833-3929.
By Daniel Hill
Rapper, singer and producer Jidenna is a man of many talents, wrapped in a snazzy three-piece suit. His Harlem Renaissance-era fashion sense makes for a striking figure in a genre for which t-shirts and basketball shorts frequently serve as stage attire, but even more striking is his remarkable versatility. Over the course of the fourteen tracks that comprise his excellent debut LP, February's The Chief, Jidenna hopscotches deftly across genres, from his masterful storytelling over the Africa-inspired rhythms of opener "A Bull's Tale" to his post-war crooning on "Bambi" to the positively trunk-rattling ferocity of standout "Long Live the Chief" (his best-known track, thanks to some prominent placing on Netflix's Luke Cage series). Jidenna is still relatively new on the scene, but rising fast.

Nikki Lane w/ Son Volt, the Vondrukes, the Sleepy Rubies
3 p.m. Off Broadway, 3509 Lemp Avenue. $25. 314-773-3363.
By Christian Schaffer
On the opening track of this year’s Highway Queen, Nikki Lane posits that it takes 700,000 rednecks to get to the top. She’s talking about the machinations of the music business in her home base of Nashville — the mass-appeal market for shiny country music — but Lane is more interested in channeling the queens and kings of outlaw country to forge her own path. Son Volt’s Jay Farrar has long since eschewed any interest in adhering to country’s dictums, alt- or otherwise, and this year’s Notes of Blue finds the band digging back into its Crazy Horse-style roots after a loving detour into honky-tonk traditions. Both acts share the outdoor stage on the final day of this year’s Open Highway Music Festival, which takes place on the grounds of Off Broadway.