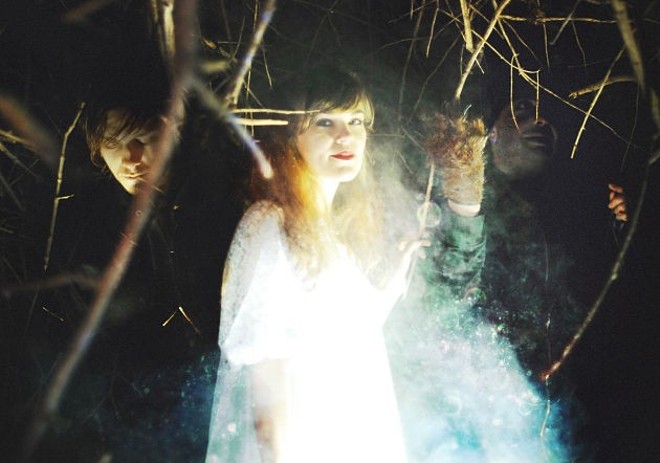 The swampy St. Louis summer is in full effect as a one-hit wonder, a hardcore super group and multiple festivals hit the river city throughout the next three days. Friday night is especially ripe for show-hopping, with concerts that range from small and intimate to large, Big Band-style performances.

If you've yet to pick your poison for the weekend ahead, the list below should provide plenty of choices.

Bruiser Queen w/ Jesse W. Johnson & Coyote Scream, Sonder Sway, The Public
8 p.m. Blueberry Hill - The Duck Room, 6504 Delmar Boulevard. $10. 314-727-4444.
By Mike Appelstein
From Bruiser Queen Is One of This Year's STL 77:
Through sheer persistence and hard work, Bruiser Queen has emerged as one of the area’s most consistent (and most fun) live acts. Equally inspired by Goner Records-style garage rock, heavy metal and ‘60s girl groups, this duo has steadily refined its raucous, deadly catchy sound. Consider, for instance, 2016’s “Telepathic Mind,” Bruiser Queen’s most recent release. Dominated by Farfisa-style organ and Morgan Nusbaum’s ecstatic vocals (“I’m freaking out tonight!” goes the chorus), it comes across like a lost Go-Gos outtake as updated by the Julie Ruin. (The B-side? A raw cover of Dio’s “Rainbow In The Dark.”) Bruiser Queen doesn’t play as many local shows as it used to; don’t miss it when you get the chance.

Drekka w/ Lather Sommer, Harris/Cunningham/Chizmo Trio
8 p.m. Kismet Creative Center, 3409 Iowa Avenue. $5. 314-696-8177.
Bloomington native Michael Anderson has crafted soundscapes under the harrowing brand of Drekka for more than two decades — that means a deep well of cassettes, records and archives to wade through. Tourmates Lather Sommer offer up electronics-meets-percussion through the duo of Ben Myers and drummer Adam Sommer. Fiercely brutal and oppressive in its approach, Lather Sommer builds voluminous noise through free-improvisation in a way that feels structured on an almost spiritual level. St. Louis bares its bloody teeth with local support from the trio of Kevin Harris, Alex Cunningham and Chad Eivins, who provide a joint audio-video venture with violin, modular synthesizer and warped projections.

Ish Album Release Show w/ Little Big Bangs, Golden Curls, Eric Donte, nebulosa, Sebo Lee
6 p.m. Blank Space, 2847 Cherokee Street. $7. 314-669-9240.
The amorphous Ish has oozed its way into south city basements, art spaces and dive bars for the better part of three years, yet its pop-leaning noise collages haven't been committed to record — until now. The new release, sungod, collects the efforts of bandleader Brit Lockhart, who welds vocals, synthesizer and samples into a bent and twisted sculpture of sound. His live band, a self-described collective of local musicians (including Sarah Wahoff of Mother Bear), breathes life into compositions, improvisations and the songs that fall in that vague but no less effervescent space in between. DJ sets by nebulosa and Sebo Lee glue the featured acts together while vampiric rapper Eric Donte caps off the night.

Lyle Lovett and His Large Band
8 p.m. Peabody Opera House, 1400 Market Street. $39.50-$129.50. 314-241-1888.
Truth be told, Lyle Lovett doesn't need his "Large Band" to fill the Peabody Opera House both with sound and the bodies to absorb it, yet tradition and the spectacle of leading nearly 20 musicians on stage has set a standard so high that longtime fans of Texas legend would expect no less. 1989 release Lyle Lovett and His Large Band set a precedent for blending Big Band sensibilities with country and swing in a way that, even twenty-some odd years later, can only be matched by Lovett himself.

Tela w/ Shana B., Lil Ryan, Raph Derty
8 p.m. The Ready Room, 4195 Manchester Avenue. $15-$20. 314-833-3929.
Tela's cutting beats and warbling lyrical flow on 1996's Piece of Mind wouldn't feel out of place if dropped in 2017. Whether that's due to the roughly 20 year loop of nostalgia making its way around or a legitimate sign that the Memphis-native was dropping tracks well ahead of his time is up for debate. Either way Tela has kept it slow and steady with a studio record every few years since 1996, as the rapper opts for growth over resting on the hits of Billboard past.

Tory Starbuck Project w/ Party Dress, Edgefield C. Johnston Duo
9 p.m. Schlafly Tap Room, 2100 Locust Street. Free. 314-241-2337.
By Christian Schaeffer
From Tory Starbuck's New Two-Disc Release Showcases His 25 Years Of "Inside-Out Pop Music":
Tory Z. Starbuck has never had a problem making music. For 30-plus years he's been recording and releasing what he calls "inside-out pop music" — a mish-mash of new wave, electronic and ambient styles, created both as a solo artist and as part of groups like neXt rAdio and the Tory Starbuck Project. If anything, the problem has been marketing and selling his numerous CDs, the number of which even Starbuck himself is unsure. "I put out so much music, I'm surprised Vintage Vinyl doesn't charge me room and board for my CDs," says Starbuck.

Chris Smither
8 p.m. Saturday, July 29. The Focal Point, 2720 Sutton Boulevard. $35. 314-560-2778.
By Roy Kasten
Chris Smither’s originality as a bluesman owes less to a return to sources and more to the way he infuses the blues with post-blues forms, a kind of reverse alchemy that transforms solid gold rock & roll and burnished folk into sounds and feelings that are as primal as they are philosophical. He’s not just one of Chuck Berry's and Bob Dylan’s best interpreters; he’s a boot-stomping, fingerstyle-guitar wizard who deserves more recognition than he’s ever sought or received. He recently titled a double-disc retrospective Still on the Levee, but he roams farther and wider than the Delta blues. Some 50 years into his career, Smither remains one of the great seers of the visionary style of American music.

Jackal Fest 2017 w/ Brother Lee & the Leather Jackals, Zagk Sloan, Old Capital, Apex Shrine, Dubb Nubb, Maness Brothers, Elliott Pearson, SweetTalker, River Kittens, Squircle the Destroyer, the Fighting Side, Dibiase, the Vigilettes, Sister Wizzard, the Death, Daisy Ad, Breakmouth Annie, Rover, DJ SayWord, Cree Rider, Mammoth Piano, SonDaze, LSXPRSS, Morgan Nusbaum, Miss Molly Simms, Cara Louise Band, Old Souls Revival
1 p.m. Atomic Cowboy, 4140 Manchester Avenue. $10. 314-775-0775.
In keeping with a fairly new tradition, Brother Lee & the Leather Jackals fills in that festival gap between ShowcaseSTL and LouFest with yet another Jackal Fest in the Grove. The lineup speaks for itself, with nearly 30 acts across three stages inside the Atomic Cowboy compound. While the day-long power run leans heavily on the many shades of rock and roll, fans of twang can gorge on a healthy helping of folk and country. For the most part, this fest worships at the altar of the almighty six (and four) string.

Gateway Jazz Festival w/ Najee, Maysa, Nic Colioinne, Pieces of a Dream, Chieli Minucci, Brian Simpson, Steve Oliver, Julian Vaughn, Steve Cole, Chris Strandring
2 p.m. Chesterfield Amphitheater, 631 Veterans Place Drive. 636-812-9500. $65.
Few jazz artists are as prolific and inventive as New York City native Najee, who has yet to take much of a break, if any, from songwriting for the last three decades. With seventeen studio records since 1986, Najee has carved out a distinct space in the world, with sultry smooth jazz that could be engrossing and introspective or a light accompaniment to round off the edges of everyday life. Sure, these songs wouldn't feel out of place on the Weather Channel, but that speaks to Najee's range and ability to craft timeless beds of sound fit for most any occasion.

Bloodclot w/ Negative Approach, The Stranger, Lumpy & the Dumpers
8 p.m. Blueberry Hill - The Duck Room, 6504 Delmar Boulevard. $15. 314-727-4444.
We're living in a timeline where Black Flag vinyl reissues are sold at Urban Outfitters (known for selling Ian MacKaye-approved Minor Threat shirts), so yes, you can justify paying $15 to see a hardcore show on the same stage that Chuck Berry built. Bloodclot features members of the Cro-Mags, Queens of the Stone Age and Danzig and the result is about what anyone would suspect, thankfully. The last time Negative Approached played St. Louis was back in March when the band hopped on a secret show with a Dinosaur Jr. side project at the Way Out Club. At least now you have fair warning.