It Is Your Civic Duty to Hate on Axl Rose 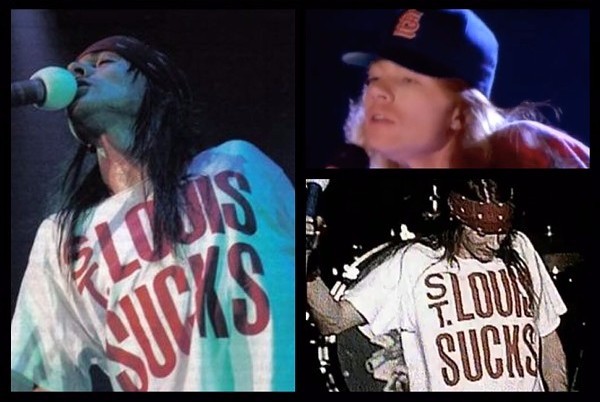 Guns N' Roses is coming to town tonight for the first time in 26 years. It should be fun! Slash and Duff McKagan are playing with the group again, and St. Louis native Richard Fortus will be performing too — you should make him feel right at home on that stage!

You should also, of course, mercilessly hate on Axl Rose. As a citizen of St. Louis, it is your civic duty.

You may recall that the last time the band was in town, in July 1991, Guns N' Roses performed at Riverport Amphitheater. A mere two and a half songs into the set's second half, Rose threw himself a little baby tantrum over an audience member who was taking photos, spiking his microphone onto the stage, tackling the man with the camera and whining about security before taking his toys and going home.

St. Louis fans responded by starting a full-scale riot, bringing an estimated 400 police officers from 30 different departments and hundreds of thousands of dollars in damage to the venue. By most accounts, it was a really good time.

Axl was ultimately arrested and served with 21 different personal injury lawsuits. He spent the years following the failed concert bad-mouthing St. Louis at every turn. The liner notes of Use Your Illusion I and II included the line "Fuck You, St. Louis!!" in the "thank you" section; Rose also took to wearing a shirt reading "ST. LOUIS SUCKS" onstage at concerts.

Now, we St. Louisans are a proud bunch, slow to anger but even slower to forget. If we were to let this aggression pass just because "Welcome to the Jungle" is a decent tune, we'd be disgracing the founders of our fair city, who in the 18th century looked out on the untamed West and declared emphatically, "This is probably far enough." We must hate on Axl Rose in the same way that we trash the Cubs, with the same fervor with which we defend toasted ravioli.

This may come easier for some than others — there are still a lot of GnR fans here in KSHE Country, and the idea of trash-talking big fat Axl Rose may leave those fans conflicted. But there are plenty of other things about the band to love other than its caterwauling lead singer. A compliment to the band for every dig at Axl will cover your GnR fandom and your hometown pride nicely.

"Wow, it is really cool to see Slash playing with Guns N' Roses again! He is such a talented guitarist. No wonder he went on to have a successful career after walking away from that bloated bandanna mannequin Axl Rose."

"You know, Chinese Democracy is actually a pretty good record! It has some great songs, despite the fact that overgrown man-child Axl Rose took 100 years and the monetary equivalent of a small nation's GDP to finally release it."

"'Sweet Child of Mine' is a fun song! Man, Axl Rose looks like the ugliest, oldest scene kid ever with those ten million bracelets on his arms. Isn't he like 55?"

See, it's easy! And remember, even if you don't have any zingers on deck, you can still at least take a whole fuckload of pictures.

Let's see you try and stop us, Axl!