The Filling Station to Close, Reopen as Kelso's 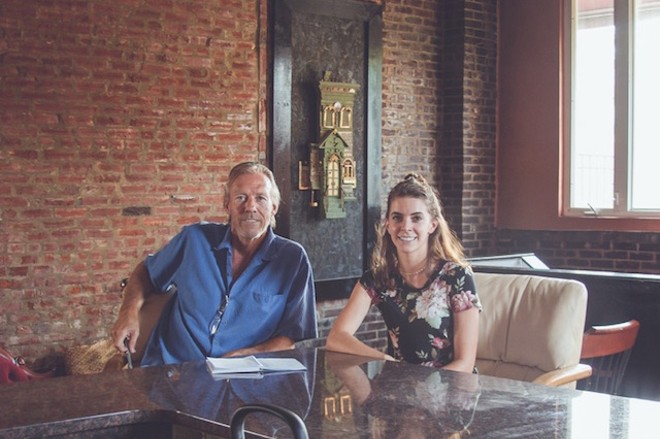 Next Monday, the Filling Station (1924 Pestalozzi Street, 314-772-9533) will close its doors after several decades in Benton Park.

But don't cry for the venerable neighborhood bar: It plans to open again the very next day. The only difference is that, as August 1, the bar will officially be under new ownership — and on its way to a new identity as Kelso's.

The duo behind the new concept, Kelsey Jenkins and Jim Kelso, both live in Benton Park. Last week, Kelso purchased the Filling Station from its owner of nineteen years, Colleen O'Connor (Kelso is the sole owner; Jenkins is the managing partner). After a going-away party for the old concept on Saturday, July 29, they'll be preparing for a new era.

As Kelso's, they intend to keep the same schedule as before — open at 6 a.m. daily, with hours through 1:30 a.m. every night but Sunday, when the bar will close at midnight.

Like the Filling Station, Kelso's will be a neighborhood bar. They describe few big changes beyond better maximizing the big yard. "It's basically two lots," Jenkins says. "We want to make more use of that space." That will almost certainly mean cornhole, and perhaps also volleyball or bocce.

"We want a place for drinking and being active versus just sitting and having a drink," Jenkins says. "Somewhere to move around and meet new people."

The pair laughingly admit that, despite the similar sound to their names, they have very different backgrounds. Kelso spent 22 years as a pilot in the U.S. Navy, including a stint at Scott Air Force Base. After retirement six years ago, he decided to return to the area and has since dabbled in some rehab projects in Benton Park.

It's there he met Jenkins, a Sikeston native and 2016 graduate of the University of Missouri - Columbia who moved to the neighborhood in March. She'd been keeping busy with freelance creative design and consulting, branding and website design. When she heard Kelso was interested in acquiring the Filling Station, she volunteered her services. Now they're a partnership. Says Kelso, "She complements my weaknesses, and she doesn't really have any weaknesses!"

The pair says they will take their cues from the neighborhood. They're interested in exploring putting in a kitchen — currently, the bar doesn't have one — and learning what other offerings might complement the other watering holes in the area, which include Benton Park Cafe, Trueman's Place and Venice Cafe.

"Neither one of us has much experience in the industry," Kelso acknowledges. "If you have ideas, we're interested in hearing you out."

He adds, "People should come down here and check it out. It's a great neighborhood with a lot of great places to hang out. Soulard gets most of the press, but Benton Park is a great little place."