Nearly Thirty Years In, Deftones Still Doesn’t Get the Credit It Deserves 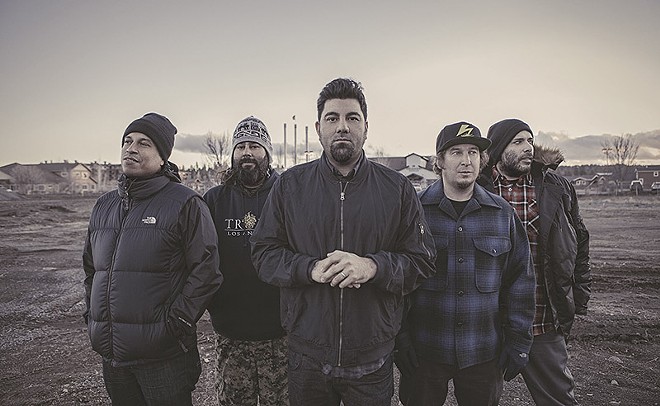 Considering the exhaustive way music-focused publications covered the twentieth anniversary of Radiohead's OK Computer, you'd think they're all gearing up to go big in October, when Deftones' groundbreaking Around the Fur turns twenty. Right? Anyone?

Is this thing on?

Don't count on it. Deftones has never rated that kind of respect among the rock-critic cognoscenti. Such is life when your earliest works contain traces of heavy metal and hip-hop, and you happen to emerge from an uncool hometown (Sacramento) right around the same time that bands like Limp Bizkit, Korn and Slipknot are becoming MTV staples.

Yes, Deftones were at one point lumped in with the nu-metal surge of the late 1990s and early 2000s. It's a tag that has been hard to shake ever since, even as frontman Chino Moreno and his bandmates have explored various styles and expanded their sonic palette into shoegaze, art-rock, heavy pop and beyond. It began with Around the Fur and continued in earnest on 2000's White Pony, whose third track, "Elite," earned the band a Grammy.

On Thursday, the Deftones will roll into the Dome at America's Center to open for hard rock legends Guns N' Roses. We caught up with keyboardist/turntablist Frank Delgado for a chat about all the above and more. Here's that conversation, edited for space and clarity.

RFT Music: In recent years, it seems there's been a shift in how people — critics especially — view your band, and that shift came into clear focus with the release of Gore. Basically: Deftones weren't "cool" back in the day, but now you all are cool and it's OK to like you. Is that something you've noticed?

Frank Delgado: I wouldn't say I go out of my way to notice it, but when it comes up it's like, "Hey, well, that's cool." The more the merrier, honestly. And the cooler you are, I guess that's even cooler. I don't know. Who the fuck even knows what's cool?

Well, I did put "cool" in quotes for a reason.

(Laughs.) You know, we've had brushes with that in other ways over the years. Like when we won a Grammy award years ago. That's crazy. That's kind of like the ultimate right there, and that came out of left field. We certainly weren't trying for it. It wasn't ever a goal. It wasn't even on our radar.

I think what we do notice are the things that we live every day and what we do is we tour. It's the shows. The shows have consistently stayed good. People still buy tickets. And people come to our shows and the shows are great, and we still enjoy playing. So I guess when that starts hurting, that's when we'll know there's something up.

Have you noticed a change in who's showing up to Deftones concerts over the years?

Oh yeah. Oh God yeah. I'm old now. You see young kids at shows with older people. So it's like there's generations there. So that's completely obvious now, and it's really crazy. And there's people who are into different records for different reasons. We haven't really been this linear band with one sound. We've been a little bit all over the place and there's different types of people who are into different songs and different moods. I think those kinds of dynamics are what makes it special.

Is it hard to put together a setlist that appeals to everyone?

It's about making a really good mixtape, honestly. There's gotta be peaks and valleys. Luckily, we have a lot of fuckin' records to choose from.

You guys are closing in on 30 years together as a band. Does hearing that number take you aback?

It does when you say it to my face! (Laughs.) No, it does, but it feels good that we're still doing this and we're doing it at a level that's respectable. And we're smiling and we're having fun and enjoying what we do, so I think that's the most important thing. Once it's no longer fun, why do it? And it just so happens that we've been doing it a long time.

Has there been a time in the band when everyone wasn't smiling and you weren't having fun, and you thought Deftones might come to an end?

Oh yeah. Of course. There was a time when we weren't the most pleasant people to be around. It's hard getting five people all on the same page when five different lives work at different speeds. And when [former bassist] Chi [Cheng] got in his accident, I think that's one thing that would kill most bands. [Editor's note: Cheng was badly injured in a 2008 car wreck, spent years in a coma and died in 2013.] So it's just about dealing with situations and talking them out and luckily as a band we've been able to do that.

How did Chi's accident affect your guys' outlook on being in a band? I can imagine that kind of thing would give you a new perspective.

It was just kind of unsaid ... especially right when that happened, we didn't know what to do. I think our only concern was with Chi and what was going to happen with him. And then we all just gravitated to our instruments. And it just kind of snowballed. There was no plan. Eventually we were like, "Hey, there's something here if you all wanna keep going forward." And since then we've just been going forward.