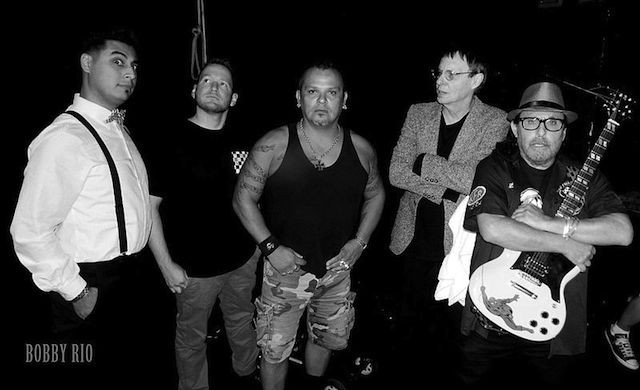 The short version of the story is this: Ancient punks the Dickies were on the Warped tour as some sort of senior outreach program and a couple of women who were a part of the touring party made signs to protest their set, which had been full of sexist statements, predatory remarks about children and general assholery.


The women moved to the barricade at the front of the audience (apparently an easy thing to do since the Dickies have so few fans) and threw their signs at singer/antagonist Leonard Graves Phillips. He then unleashed a fully predictable rant against the women, calling them cunts, attacking their looks and urging the audience to shout them down. (You must watch the video clip to witness the full vitriol.)

This is happening all over the place these days, it seems. Old white dudes say bullshit, then get caught saying bullshit and get even more testy, and then other men step up and defend them in the name of free speech. And in this case, other men also defended them because they're known for being “punks” and punks don’t follow “rules.”

Okay, fine. But let’s not pretend that an old white dude ranting and acting like a sexist idiot is in any way revolutionary or anti-establishment. In fact, it’s totally status quo and boring, just like the music of the Dickies. It seems as though any woman who disagrees with a man is automatically accused of being a fat, ugly, cunt, bitch, slut, whore. These men drop every standard played-out insult to women and then wrap themselves in an American flag and claim to be untouchable. But our free speech laws exist to attempt to protect those of us with bigger mouths from legal prosecution, not from public opinion. And it seems that those most likely to call others “snowflakes” are actually the ones who can’t handle the heat. And what about the women’s right to free speech? Do protesters not have free speech, too? It must go both ways. Phillips spotted the protesters, then encouraged a mob of his fans to help him verbally attack them, totally proving their entire point while suppressing their free speech. Let’s be serious, these were a couple of young women at a venue containing thousands of drunken men amped up on booze and misogyny — they didn’t have microphones and a crowd to back them up. They weren’t going to win the argument in the moment, at least. But if Phillips wanted them to be powerless, he should’ve ignored them. Instead his little baby tantrum gave their message more reach than they would’ve found otherwise and made him look like an ass in the process. Then other men of questionable pedigree just couldn’t stop themselves from jumping in to defend their bro because a couple of women with protest signs is an affront to all of worldwide male dominance, apparently. Former Queens of the Stone age bassist and full-time turd Nick Oliveri posted to Facebook what is presumed to be a defense of the Dickies because he says that he celebrates that rock and roll is “criminal” and “dangerous.” But the last I checked it was that dude who was criminal and dangerous. Or, at least that’s what a swat team thought during an hours-long standoff at his house where he was holding his abused girlfriend hostage. (He was apparently kicked out of QOTSA a decade before this incident for the same type of behavior.) If violent dumbasses like Nick Oliveri are sticking up for you, you’re on the wrong side of history. Eagles of Death Metal singer Jesse Hughes also got in on the action in a post on Instagram saying, in part, “rock 'n' roll is about saying whatever the fuck you want!!!!!! Especially if it's offensive to people Who are weak cowardly and can't stand for anyone else to be free !!!!sticks and stones, my friends,sticks and stones!!!....., and PS a safe zone is a place that exists in your home not at the place you voluntarily drive to and walk into and sit in an audience of that exists in a public place.....” It seems as though Mr. Mustache would actually welcome “safe zones” of any variety in public places since a large chunk of his audience was slaughtered in Paris a couple of years back. Still, it’s hard to take any exclamation-point-rich rant that Hughes posts at face value because he’s clearly a traumatized victim of terror. (Remember when he suggested that the venue’s own security was in on the attack and then had to check his own statement? Prayers for this lost little guy.) And some moron with Guy Fieri hair named "Noodles" from the Offspring also piped up on Instagram, saying that the Dickies have long been one of his favorite bands (that explains so much) and that “I honestly don't see how anyone could seriously take offense from anything they do or say.” I mean, ol’ Gnudz has a really good point there. Who knew that anybody was even listening to what the Dickies had to say? Anyway, I’m no enemy of free speech, so I say please, please pass this fool the microphone always. It’s best to know where we all stand when it comes to idiocy and knee jerk sexism. But if you want to hear a bumbling geriatric crackpot talk nonsense, you’ll have to watch some news about our “President” because the Dickies aren’t booked for any future Warped Tour dates and their other tour dates abroad are being canceled by promoters over their “misogyny and bullying.” Sad! Later, skaters.