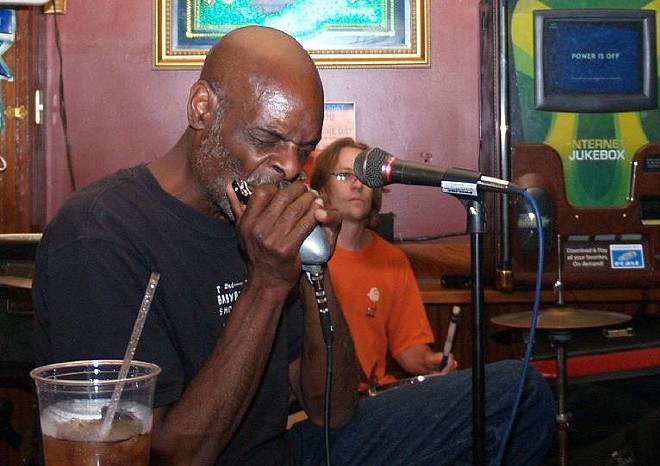 The first three play just a couple of minutes before McSpadden emerges from the kitchen with an empty box in hand. He flips it over, sits his small amp upon the repurposed stand, and then sits himself down as well. And then he starts to play, and the band suddenly feels complete, his solo runs drawing applause and his smile greeting each new audience member.

At moments during the first set, a person or two would arrive from outside, whether Pestalozzi Street or the patio, observing the group having their quintessential Venice-style moment, some dropping a dollar or three in the tip jar. Maybe twenty people are inside, with about as many more on the cafe’s champion patio.

As the set wraps up, a quick phone search is conducted: 2.7 million people have viewed a video on YouTube, the Call of Duty: WWII multiplayer trailer. There is good reason for that search — the new promo has an unusual St. Louis-via-Nashville connection, with McSpadden’s voice a key part of the story.

Tony Esterly, formerly a producer at Shock City Studio in south city, has lived and worked in Nashville for about four years, spending a good chunk of that time freelancing contract work as a songwriter, arranger and producer for Downtown Music, a licensing agency in New York. Recently, Esterly was given a song to rework/reinterpret: “Death Don’t Have No Mercy” by the Rev. Gary Davis, a piece held by Downtown.

Esterly was told to rework the track for a video game trailer, not knowing all that much beyond those basics. In looking for a singing voice, he called Segel-Moss — a call that netted him McSpadden’s name.

“In my head I was thinking, ‘Who could sing this song that I know?'” Esterly says. “I didn’t want to just hire random people. I used to play in Gumbohead and we played Broadway Oyster Bar and BB’s a lot, so I knew Eric from there.”

Working quickly, Esterly hired St. Louis producer Paul Niehaus; the two had worked in the “15 in 15” and “16 in 16” compilations for the St. Louis Blues Society previously. Esterly asked Niehaus to get four clean takes of the vocals, though Niehaus wound up getting about ten rounds of the vocals in a short next-day session. They worked, and the results did, too.

“He’s one of the better-known blues performers in St. Louis,” Esterly says, “and I can’t think of anyone singing that song better, or giving it that kind of power.”

Adds Niehaus, “He’s like many of the older cats in St. Louis: They’re truly amazing musicians and have terrific, authentic music personalities. He’s got a nice, big, booming voice and a way with phrasing blues melodies. This song was right in his wheelhouse.” As such, the recording process “was very natural,” via “a beautiful, baritone voice and very skilled singer.”

Once Esterly was finished with his cut, the track went back under the knife via other members of the Downtown Music video/film unit to fit in with the imagery of the trailer. Which by any subjective measure is a violent one; that content of its hyper-realistic video violence has given McSpadden some pause. Our conversation about the track lasts only a few questions before being tabled, largely due to the violent imagery of the trailer.

All parties involved in getting McSpadden onto the gig hope it leads to more opportunities. Esterly, for instance, says, “I basically want Eric to get some shine and have more people hear him sing.”

Esterly, who thinks he may have played the Call of Duty series “once or twice,” says “the numbers are kinda staggering. The number of people into that video game, hearing Eric sing, is spreading this way beyond St. Louis and into the whole world. The sheer volume of people listening to it is pretty amazing.”

Segel-Moss says, “Ultimately, these kind of opportunities can lead to much bigger and better things for the artists involved, as well as the city at large. Eric has been a fixture on the St. Louis music scene for decades. While he is known for his blues singing and harmonica, he also plays a wide range of styles and genres. He can fit into any setting, style or stage. While the video game trailer is a great moment for exposure, I think it is also important to see that guys like Eric play almost every night in St. Louis with great success.

"Being featured in the trailer is a blip in a lifetime of performance," he adds. "I'd love to see some of these musicians given more opportunities like this to help raise the bar for everyone.”

Watch the trailer (and listen to McSpadden's powerful voice) below: