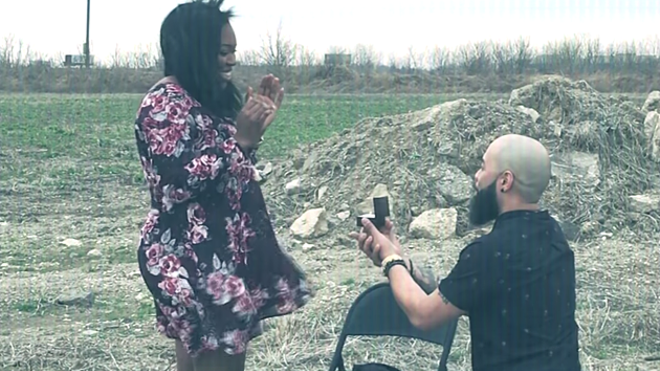 After a music career that has spanned twenty years, local musician Kahsan seems to have hit his stride with his newest single. The music video for the singer's new song, "Super Man," was released only a month ago and has already generated more than 180,000 views on YouTube, with a surprise proposal to his girlfriend at the end helping to drive at least some of that considerable traffic.

The St. Louis native has been involved in music since 1996 — but you've probably never heard of him under his present stage name. Until recently, Kahsan went by the moniker "Tylan." Kahsan used this name to pay homage to his mother's Thai heritage — he even spent some of his younger life with family in Sukhothai, Thailand, where he learned to speak Thai fluently.

However, Kahsan recently decided he was ready to put an end to the chapter of his musical life as "Tylan," instead going simply by his first name.

"I wanted to mature, and I wanted my music to mature and give people an honest me," Kahsan says.

Kahsan explains how just in the last year he was finding himself extremely down about himself and his career in music. He was almost ready to give it all up. When a vein disease Kahsan's lived with for some time put him out of work for a five-week period it only contributed to his feelings of disenchantment.

"It put me down to a pretty depressing place," says Kahsan. "My producer and I were kind of finished with everything."

However, inspiration would soon enter his life. Once he returned to work his producer, Tommy Patzius, brought him the instrumental for "Super Man." Initially, Kahsan flirted with the idea of selling the track to someone else.

"We originally wanted to sell the song," he explains, "because that's my end-goal, is to be able to clock in at a studio rather than work a nine-to-five in a mall."

Deciding to keep the song for himself is the spark that launched his career turnaround. As he strays away from his hip-hop roots as "Tylan," Kahsan is ready to embrace all genres of music, refusing to be pigeonholed into any one category. "Hip-hop was extremely fun," he says. "Running around back and forth on stage and yelling was fun for someone at the time who had a lot of aggression."

His music nowadays leans more R&B, with influence from genres including country, soul and trap. He lists his current influences at the moment as being Logic, BJ the Chicago Kid, Anderson .Paak and Smino.

In the coming months Kahsan plans to continue to expand upon the success of "Superman" and get it out to as many people as possible. He also is in the process of getting together some performances. When asked about any upcoming music, Kahsan simply says, "Bro, I have about five [singles] that are loaded up in the gun and ready to go."

And also, of course, he's got a wedding to plan. He says the couple intends to tie the knot on August 8, 2018. Kahsan explains the date's significance: "Eight is the symbol for infinity, her ring size is eight and I proposed to her on 3/5. You can do the math."

Watch the video for Kahsan's "Super Man" below: