LouFest has added Snoop Dogg, Run the Jewels, Spoon, ZZ Ward, Middle Kids and a special tribute to Chuck Berry to its lineup for 2017, completing this year's roster in a second wave of announcements following initial acts announced in early May.

Snoop Dogg fills the mystery headliner slot; his most recent performance in town came last summer at Hollywood Casino Amphitheatre with Wiz Khalifa — Snoop made kind of a big deal about how much he loved the special "Bacon Blunts" and other BBQ delights provided by Sugarfire for that occasion, so it's easy to guess what he'll be eating while he's in town. 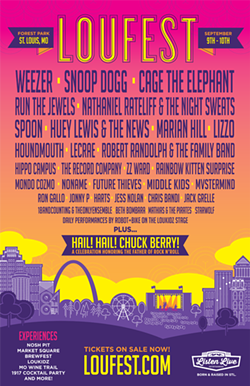 Run the Jewels comes in on a hot streak, on its third critically lauded album since its breakout in 2013, bringing Killer Mike, El-P, and hometown hip-hop hero Trackstar the DJ back to St. Louis for the first time since their electrifying performance at the Ready Room on November 24, 2014 — the night a grand jury elected not to charge former police officer Darren Wilson in the shooting death of Michael Brown.

The organizers of LouFest, Mike Van Hee and Rich Toma of St. Louis-based Listen Live Entertainment, have also included a special tribute to rock & roll legend Chuck Berry, who passed away early this year, dubbed "Hail! Hail! Chuck Berry! A Celebration Honoring the Father of Rock N’ Roll." The group is working closely with Berry's family to create a tribute to the St. Louis musician — one that they intend to be a permanent part of the festival going forward.

“Just as Chuck made an indelible mark on music of every genre, in his honor LouFest will make his legacy an everlasting part of our event,” the two write in a statement released this morning.

“Chuck owned his own live music venue on Grand Avenue, hosted outdoor concerts at Berry Park and played monthly shows at Blueberry Hill for years," says Gary Pierson, Berry Family representative. "Chuck loved to bring people music — especially in St. Louis — and the family is excited to see that carry on through LouFest.”

The festival will be held in a different location within Forest Park than that of years past, as renovations continue in the park's Central Field. This year's event will take place on the Upper Muny Grounds and Festival Plaza, a recently updated space near the Muny Amphitheatre.

“We’re excited to be next to this historic landmark in a space with so much to offer," says Van Hee. "The natural amphitheater setting of our main stage as well as the infrastructure of the Festival Plaza will provide an incredible visitor experience.”

Check out an artist rendering of what this year's LouFest will look like, as well as the festival's full lineup, below: