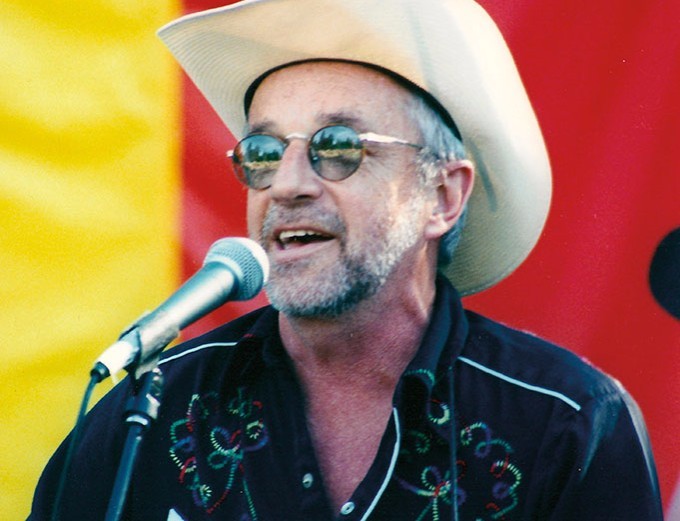 The friendship and partnership with lead singer Patrick Haggerty began when Jack Grelle, St. Louis’ own progressive country music star, asked Haggerty if he wanted to play music together after the documentary These C*cksucking Tears — a film about Lavender Country — screened at the 2016 True False film festival in Columbia, Missouri. It was the first time since Haggerty started performing in the early ‘70s that he was ever approached by a straight white country musician to collaborate, he says. It an emotional event that brought Haggerty to tears.

“The story on Jack… It’s not like I was pickin’ and choosin’ and throwin’ out country musicians who wanted to do stuff with me,” Haggerty explains. He says that other than Robert Hammerstrom, the original guitar player for Lavender Country, “Jack Grelle is the first straight white man who did country music who ever said, ‘Hi, I’d like to do a show with you.’”

When Grelle asked Haggerty what he would need to put together a show in St. Louis, Haggerty replied, “air fare and people to play the show with me.” So Grelle got to work, assembling an all-star cast of St. Louis musicians for the July 2016: Lavender Country’s St. Louis incarnation features Grelle, Kristo Baricevic of Big Muddy Records and the Strange Places, Nick Zengerling of Maximum Effort and Catholic Guilt, Melinda Cooper of Town Cars, Ryan Koenig of Lonesome Cowboy Ryan and Pokey LaFarge’s band, Isaac Cherry and Julia Van Horn.

Haggerty has subsequently done “a lot of shows with the St. Louis bunch” traveling around the Midwest, with further tours across the U.S. planned for summer and fall. Lavender Country has played twice in St. Louis thus far, with another show scheduled this Friday, May 26 at Off Broadway.

When Lavender Country first formed more than 40 years ago, the band “wouldn’t dream of” touring the way Haggerty tours today, he says — it just wasn’t possible for a band full of nearly all openly gay members to travel safely. In the ‘70s, Lavender Country only played events put on by activist group Gay Liberation Front around the Seattle area, and only sold its album, which was released by the Gay Community Social Services, through advertisements in underground gay magazines.

But now, ever since Grelle asked Haggerty to play Lavender Country songs together, musicians from across the country have asked to get involved in his project. Haggerty says what they’re actually saying is, “Oh my god, let me do something real for a change. Let me put my activism and my music together.” He explains, “They’re flocking to me and they don’t even know me, because they feel a need” to express themselves.

“No one is giving them a mechanism for expression in country music,” he says. “They don’t even realize that, and they’re putting it all on me.”

Haggerty released the original Lavender Country album 44 years ago to “transform society wholly and completely,” and to create “fundamental changes” in how people think about the subject of homosexuality. Haggerty is ecstatic that this album, nearly a half-century old, has reached a new audience — one he affectionately refers to as his “pink-haired, anarcho, screamo, fuck-you” crowd.

Haggerty says he is thrilled to see Lavender Country “being used as the tool I intended it to be 50 years after I wrote it in such a huge way… It hits you deep in the soul, it really does.” To Haggerty, Lavender Country is a way to do more than talk about a revolution. It’s a way to, as he puts it, “rise up and rip this goddamn system down.”

The current political climate, coupled with a growing public understanding and celebration of LGBTQ rights in recent years, has made Lavender Country more relevant than ever – and St. Louis musicians were the first to join the movement.

Lavender Country plays Off Broadway on Friday, May 26. Tickets are $10 in advance and $12 at the door. Proceeds will be donated to the Gay Straight Alliance.