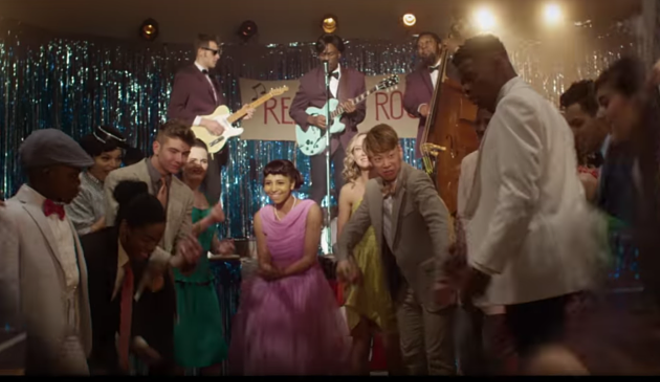 Some two months after his passing at the age of 90, Chuck Berry has his first ever music video.

Set to the tune of "Big Boys," the lead single from Berry's upcoming album, Chuck, the video takes place at a high-school dance that calls to mind elements of '50s sock hop culture, with swing-dancing and rock & roll prominently on the menu, naturally. It was directed by Matt Bizer and Curtis Wayne Millard, who have previously worked with the likes of Old Crow Medicine Show and Shovels & Rope.

Berry himself does not appear in the video — rather, a lookalike performs onstage as the plot unfolds (he even does a mean duck walk toward the end).

In an email to NPR music, the directors say that Berry was indeed still alive when the video was shot, however.

"When we where shooting the video, Chuck Berry was still with us and during post-production we found out he had passed on," they write. "We did not know how to really process it all. In a way, I think we are still processing the entire experience."

Chuck will be the first release by Berry in nearly 40 years. It is set for release June 9 on Dualtone Records.

Watch the new video below: