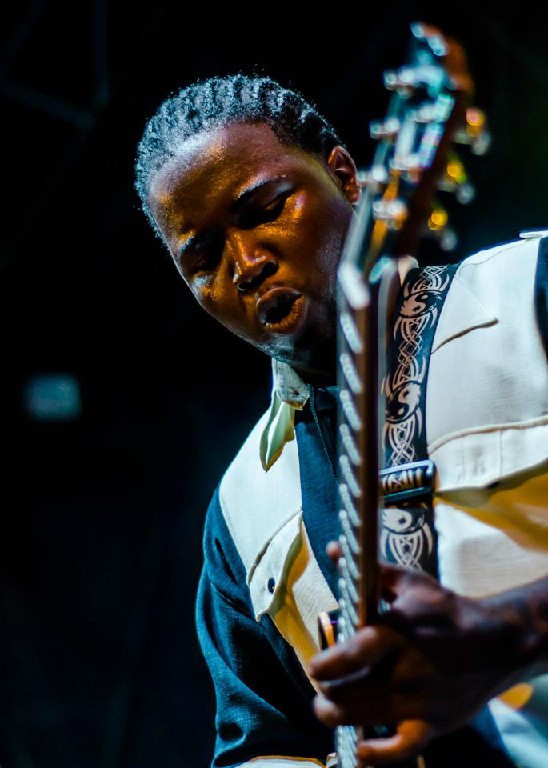 The weekend ahead is super top heavy with most of our picks taking place on Friday night. While some will have a hard time picking between shows such as blues supernova Marquise Knox or Al Holliday's all local Soul Revue at Delmar Hall, maybe take a moment to appreciate that we have so many different options in St. Louis. There's a huge swath of sounds on offer for the next three days, so read ahead and feel free to add what we missed in the comments section below.

All St. Louis Soul Revue
8 p.m. Delmar Hall, 6133 Delmar Boulevard. $10-$12. 314-726-6161.
By Christian Schaeffer
From The All St. Louis Soul Revue Seeks to Unite the City's Finest Artists:
Given that Al Holliday regularly records and gigs with a ten-member band, he's accustomed to grand ambitions. His first record, Made it Through the Mill, Again, was recorded live in the recording studio, without the benefit of overdubs or auto-tuned fixes; he's the kind of performer who likes to walk the tightrope without a net. Given the chance, Holliday — a singer, songwriter and keyboardist who covers a wide swath of blues, R&B and funk in his husky, horn-aided compositions — tends to think big. That spirit animates this weekend's All St. Louis Soul Revue, which Holliday hopes will unite various artists from across town and from varying corners of the soul-music universe.

Bill Frisell Trio
8 p.m. The Ready Room, 4195 Manchester Avenue. $28-$32. 314-833-3929.
By Roy Kasten
From At 66, Bill Frisell Is Still Finding His Voice:
When Bill Frisell picks up his guitar, adjusts his pedals — they're arrayed like Zen stepping stones at his feet — and tweaks his amp, he's not readying a performance or looking for a sound, exactly. He's finding out where he's at in that moment, on stage or in a studio, and how that moment can really be what he's feeling — or even what he may not know he's feeling. No guitarist in jazz or rock or blues or folk sounds like him, because none are him. That's not really a tautology.

Explosions in the Sky w/ Seashine
8 p.m. 6161 Delmar Boulevard. $26-$30. 314-726-6161.
From the Friday Night Lights TV show to the Street Fighter game series, Explosions in the Sky has appeared on many soundtracks without having to stretch or shape its sound. Whether you've followed the band from its cred-building tour with Fugazi in 2002 or you're a recent convert, one fact cannot be denied: Explosions in the Sky has remained largely the same since its humble start in the early aughts. Saying that the band has changed would be inaccurate — a better word for America's most consistent post-rock outfit is "evolution."

Marquise Knox Band
10 p.m. BB's Jazz, Blues & Soups, 700 South Broadway. $10. 314-436-5222.
How many awards and accolades has Marquise Knox earned at this point? We at Riverfront Times named him Best Blues Artist for multiple years and that shouldn't be taken lightly considering the city we live in. Sure, Chicago, New Orleans and Memphis all lay some sort of claim for being the blues capital of the world, but we in the river city know better. Knox, still a few years shy of 30, has done more in his short career than many musicians have throughout their entire lives — thanks in no small part to his mentors and the strong, connected and historic blues scene in St. Louis.

Midwest Avengers w/ Mr. I, Red Zero
7 p.m. The Firebird, 2706 Olive Street. $10. 314-535-0353.
For a hip-hop outfit that names Black Flag as an influence, Midwest Avengers knows how to spit fire while keeping its collective cool — not a trait shared by the titular punk band no matter the era. Genre-hopping can lead to some nasty pitfalls, yet the five-piece clears the gap altogether by ignoring the negative space below. Who or what would you fight if you knew you would win? Midwest Avengers answers without a seed of doubt.

STL Free Jazz Collective
7:30 p.m. 14th Street Artist Community, 2701 North 14th Street. Free.
Sponsorship from Regional Arts Commission makes this event free and also serves as a seal of quality from an organization that has helped disperse experimental music throughout the city. The current lineup consists of St. Louis' first poet laureate Michael Castro, pianist Jim Hegarty, Baba Mike Nelson, Paul Steinbeck, Gary Sykes and Jerome "Jay Dubz" Williams. While we could point to past shows for reference, every piece is improvised so come in wanting for a distinct, singular show and leave with your expectations blown to bits.

Trauma Harness w/ Nectar, Vanilla Beans, Carte De Visite
9 p.m. CBGB, 3163 South Grand Boulevard. $5-$7.
Breaking the confines of a style is one thing, but Belleville-expats (now St. Louis based) Trauma Harness hearken back to post-punk ancestry while sidestepping the sins of the genre's forebears. That is, the trio handles the craft with wit and respect but never pays full-on tribute. Singer and lead riffer Josh Jenkins waxes maniacally, buckling under the weight of his own harrowing howls while a pointed and percussive rhythm section lays gravel for the songs to roll on. Still not convinced? Lou Barlow of Sebadoh was visibly blown away while watching Trauma Harness close out a recent secret show with members of Dinosaur Jr. and Negative Approach in attendance.

Dressy Bessy w/ Arc Flash, Shitstorm, Baby Baby Dance with Me
9 p.m. Foam, 3359 South Jefferson Avenue. $5. 314-772-2100.
When Dressy Bessy debuted in the mid-nineties, one of its major draws was guitarist John Hill, who also played with The Apples in stereo. And sure, having indie rock royalty involved might've made for more attention early on, but Dressy Bessy veered more toward power pop and gained its own accolades in turn. Nearly two decades and seven studio albums later, the band descends on Foam with a pristine, scratch-free local lineup in tow. Shitstorm is a live clinic on rock & roll and Baby Baby Dance with Me just might be the most underrated band in the city.

Iced Out w/ ICE, D-M-Y, DJ Drug Money, Mbz, B La B, DieJesseDie, Teacup, Dragun
9 p.m. Blank Space, 2847 Cherokee Street. $5. 314-669-9240.
Since the release of im A mirAcle in 2012 we've sang unending praise for Black James, who changed her alias to ICE more than a year ago. Yet the acclaim for those early tapes might be why we have to include both names when we mention ICE — just to make sure everyone else connects the right dots. Her, along with D-M-Y, B La B from Atlanta and many more MCs, DJs and other acts will fill the lower den of Black Space with a buoyant and busy night of electronic music.

Charly Bliss w/ See Through Dresses
8 p.m. Sunday, April 30. Off Broadway, 3509 Lemp Avenue. $10. 314-773-3363.
By Christian Schaeffer
For a band that revels in its ability to spin off quick, chunky riffs that burst with buzzy pop spangles, the Brooklyn quartet Charly Bliss took a circuitous route in releasing its debut LP, Guppy. After a handful of quick-hit singles and seven-inches – as well as an aborted first pass at a full length – the band dialed in the right amount of fuzz and bombast to make an album that honors its mid-'90s forebears (Weezer, Letters to Cleo) while making a claim for guitar-rock potency in 2017. It doesn’t hurt that singer and guitarist Eva Grace Hendricks cuts a complex figure, both when she’s shouting down cat-callers and navigating heartbreak.