The All St. Louis Soul Revue Seeks to Unite the City's Finest Artists 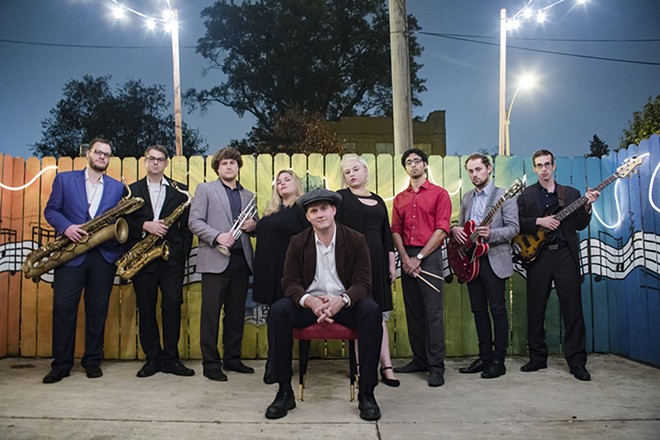 Given that Al Holliday regularly records and gigs with a ten-member band, he's accustomed to grand ambitions. His first record, Made it Through the Mill, Again, was recorded live in the recording studio, without the benefit of overdubs or auto-tuned fixes; he's the kind of performer who likes to walk the tightrope without a net. Given the chance, Holliday — a singer, songwriter and keyboardist who covers a wide swath of blues, R&B and funk in his husky, horn-aided compositions — tends to think big.

That spirit animates this weekend's All St. Louis Soul Revue, which Holliday hopes will unite various artists from across town and from varying corners of the soul-music universe. Alongside Holliday and his band, artists including Big Mike Aguirre, Hillary Fitz, the Sleepy Rubies, Tommy Halloran and Kenny DeShields will perform at Delmar Hall on Saturday, April 28.

"This is a revue show, the first of many I hope," says Holliday, who knows a few things about such multi-artist affairs, having come up through the local R&B channels at BB's Jazz, Blues & Soups' regular "Baby Blues" showcases as a younger man.

"The Stax and Motown Revues are definitely a huge source of inspiration, but at the same time we aren't trying to do any kind of 'jive-ass recreation' of those, if you will. This event first and foremost is about showcasing our local artists," he continues. "Every last one of them is a truly inspired, gifted, musical force of nature. As musicians we spend so much time working hard in the community, something we take a lot of pride in, no doubt how a lot of us make a living. But, inherently with the limitations of that, artists just don't have nearly enough of a platform to showcase their work live."

This week's revue hopes to rectify that limitation while also serving as a fruitful crossover between artists; Holliday hints at what he calls a "slow-jam version" of the Sleepy Rubies' standout track "South City," turning the acoustic folk strummer into something a little more sultry. The show will also focus on relative newcomers such as Aina Cook, who sings in Holliday's East Side Rhythm Band, as well as young students from his School of Rock class. Holliday has recently acquired an analog tape machine, and he's begun to consider committing these artists to tape and preserving the revue for the sake of posterity.

"The dream is to record some of these artists under a small label and basically record all of the music for the first all-St. Louis soul revue for an album," says Holliday. "I know it's a little crazy, but the vision for this is to ultimately put what we are doing here in St. Louis on the map, one way or another."

The revue aims to find commonality among these many local artists. One such collaboration will come between Holliday and local soul singer Kenny DeShields; the pair will debut a new song, "Wake Up America," at the show. Their partnership serves to highlight their differences — Holliday is a white man from Collinsville, Illinois, and DeShields is a black man originally from Mississippi — as well as where they converge.

"We are two different races, but love and music brings us together," says DeShields.

"The thing that I see, every time I sit down with an artist, is that every one of them has their own distinct musical reality," Holliday says. "It floors me to look with our band through the lens of their eyes, and to see what we come up with. When I hear Kenny, for example, I hear a lot of stuff, but I hear a lot of Michael Jackson, Prince, and a more contemporary sound than we have — not to mention his great energy and all of his experience he brings from playing music in the church. He's inspired, it's infectious and it brings out a whole lot of things that wouldn't have come out of me in my own little musical world."

DeShields echoes the sentiment, recalling that he and Holliday played a bill at the Broadway Oyster Bar together three years ago and had been meaning to collaborate since then. When Holliday asked the soul singer to join the bill, it re-energized both performers and helped spawn the new song.

"We got together and instantly it started to materialize back and forth. It's kind of funny — with so much going on in the world and our country and locally, it feels like this song is about right now. The song says that 'this is going on in your own backyard,'" DeShields says. "In so many ways we don't talk about what's going on in our own city."

A singer who often relies on smooth instrumentation to ground his soulful, gospel-trained delivery, DeShields says he tried to channel the consciousness-raising soul music of the 1970s even as he sought to relay a message for a post-Ferguson, Trump-era audience.

"Each generation is given this charge, this commission to write about what's going on," says DeShields, citing the way Marvin Gaye, Curtis Mayfield and Stevie Wonder put a message in their music.

But for "Wake Up America," DeShields says that he and Holliday channeled Soul Brother #1 in composing the tune: "It's got this James Brown kind of feel to it, but it's still distinctly Kenny and Al."

DeShields notes that, not unlike other areas of St. Louis, the local music scene is often segregated. He hopes that this weekend's show is a small but important step toward a greater sense of unity. "I want to be even more of a proponent to help break down those walls," says DeShields. "It takes bravery; it takes having conversations that are maybe uncomfortable."

For Holliday, this weekend's show is likewise an opportunity to build bridges across a diverse but often partitioned music scene

"We are working in solidarity, all together in one place, which all of our own things don't allow us to do as much as we might like," says Holliday. "But really what it's all about to me is the music, and that's what it's always been about for us — and we can't wait to play."