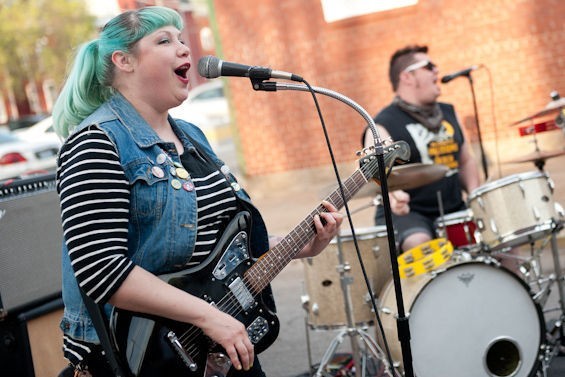 Ever heard of lightning striking in the same place four times?

The Riverfront Times' annual summer musical festival will take place in the Grove for the fourth year in a row on Saturday, June 17, with a kick-off show at Atomic Cowboy on the night of Friday, June 16.

Now dubbed ShowcaseSTL, this celebration of St. Louis music boasts the largest all-local lineup yet, with more than 100 acts set to perform. The event will take up more space on the calendar as well — for the first time, we're expanding the festivities to two days, with a huge blowout on Friday night at Atomic Cowboy in addition to live music across eight venues from 1 p.m. to 3 a.m. on Saturday.

So what's with the fancy new name? For starters, "Riverfront Times Music Award Showcase" is a mouthful. ​For another, the change to ShowcaseSTL is part of a broader change to how we handle the very idea of music awards. ​

​In past years, we chose a group of finalists and then, on the day of showcase, hosted a competition that required bands to compete against each other for votes in categories like "Best Pop" and "Best Garage Band." But after years of dealing with complaints about the categories, and facing the increasing realization that the voting part just didn't make sense, we decided to scrap that set-up in favor of developing a winners list of our own.

All 77 acts will be featured in our June 14 issue, released the week of ShowcaseSTL. And many will be performing at the event, too. But it's not an exact mirror: We wanted the event to be open to newish bands that may not be on many people's radar yet, in addition to St. Louis' stalwarts. Similarly, we wanted to be able to write about acts that are doing important things in this city even if they are unable to participate in this year's event.

These 77 acts were chosen in much the same manner as we used to pick nominees for RFT Music Awards in the past: We reached out to our readers, as well as a large list of music writers, venue owners, radio DJs, promoters, record store employees and other movers and shakers in the local scene, asking them to share with us the acts that they feel did big and important things in the last twelve months. Then we tallied up the lists — but instead of awkwardly wedging the acts into genre categories and pitting them against one another, we're simply writing about all of them​. After all, this is meant to be a celebration of St. Louis' music scene, not a competition.

If you can't wait for all the ShowcaseSTL excitement, all-access wristbands are now available! $15 grants access to the whole weekend. (With more than 100 acts set to perform that's less than 15 cents per act, in case you're keeping track.)

In the meantime keep your eyes peeled for more information, including a detailed schedule and profiles of many of the participating acts.

Without further ado, the lineup for ShowcaseSTL 2017: