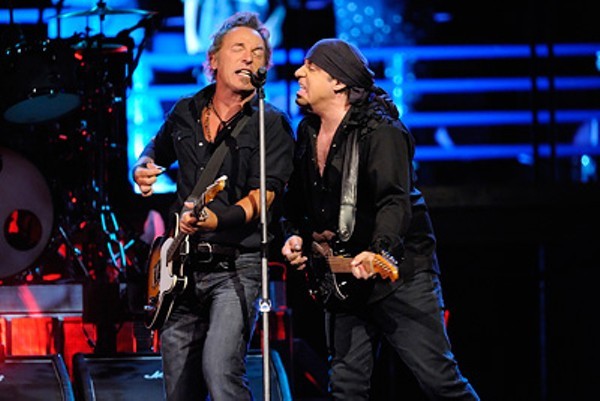 Did you see Bruce Springsteen and the E Street Band in St. Louis in August 2008? Don't you wish there was a way you could relive the memories of that night?

Good news: Now you can!

An official bootleg of the concert is being released by the band via CD and MP3. Recorded off the soundboard at Scottrade Center on August 23, 2008, the album features 29 tracks covering more than 3 hours of music, including a cover of Chuck Berry's "Little Queenie."

The concert was part of the Boss' tour behind his 2007 album Magic. On that particular outing, it was common for fans to bring signs requesting specific songs to the venue each night. Springsteen would take those requests and the band would perform them, sometimes resurrecting tracks they hadn't played in decades.

Former RFT Music editor Annie Zaleski was in the house for the show:

"As if to demonstrate the E Street Band’s looseness, Springsteen took requests all night from the crowd," she wrote in a review. "People held up hand-drawn signs with song requests and lyrics. He gathered them together like Santa Claus gathering gifts and brought them onstage, only to sift through the pile and pick out songs to play. At one point he joked he was going to 'challenge the band – and the audience!' with the selections, although he was careful to note, 'The elephant never forgets!'"

An unofficial bootleg of the show has been floating around for years, and an audio-only version of the concert is available on YouTube, but the sound is of lesser quality than the official release:


CDs are available for pre-order at $23 and are set to ship on May 1. A downloadable MP3 version of the set is available now for $9.95.