The 10 Best Concerts in St. Louis This Weekend: April 7 to 9 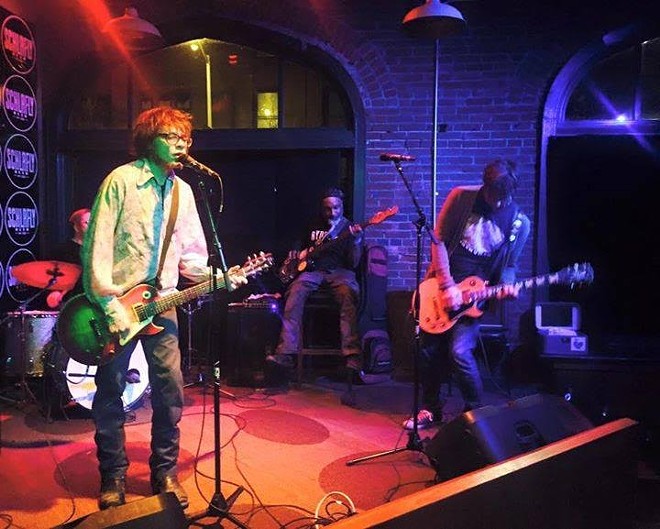 Few bands could be described as legendary but Guided by Voice has earned that adjective through a constant flow of groundbreaking work. Those without tickets might be out of luck come showtime, though that should stop no one in St. Louis where stellar sounds tend to leak from every dive and corner bar. An all local festival helps round out a busy weekend that also includes a release party for five brand new albums all by separate bands.

Guided by Voices w/ The Brainstems
8 p.m. The Ready Room, 4195 Manchester Avenue. $25-$30. 314-833-3929
The St. Louis music community is big on traditions, especially around the holidays. Off Broadway typically hosts a Guided by Voices tribute around Thanksgiving, featuring a big, messy pile of St. Louis acts paying homage to Robert Pollard and company. What does a cover show have to do with seeing the real deal in the flesh? Nothing, actually. But consider the fact that your river city brethren and sistren have slaved over learning these songs, so you might consider seeing the songwriter live.

Minus The Bear w/ Beach Slang, Bayonne
8 p.m. Delmar Hall, 6133 Delmar Boulevard. $22.50-$25. 314-726-6161.
Following the first real lull in recorded output since the band's inception in 2001, Voids was released last month to much fanfare and critical acclaim. So consider this tour a combination victory lap and return to form for the group who will no doubt mix in plenty of old favorites with material from the new record. Minus the Bear is obviously the main event, but get your money's worth and arrive on time for the openers — especially Philadelphia's Beach Slang.

Monoteknic w/ DJ Doum, Quasar Camp, Bass Ninja, Cryptonix
9 p.m. The Crack Fox, 1114 Olive Street. Free. 314-621-6900.
Love Hz, the monthly booze and bass show, returns with this rare locals-only edition. Since this event tends to draw in touring or traveling acts, think of this as a St. Louis showcase of drum and bass. Technically the style is a niche of a niche, so if you enjoy to warbling, skull-shaking songs, join your kind and bask in the dark vibes at Crack Fox.

Snakehole w/ The Regrets, No Ice, Bald, Concentrator
9 p.m. The Sinkhole, 7423 South Broadway. $5.
The duo behind Miami's Snakehole describes itself as an "outlet for female rage" yet the band doesn't seem to play up or down femininity (or masculinity, for that matter). Genre-wise, Snakehole skews punk but manages to hide whatever its biggest influences are under a dense and distinct sound. The pair's self-titled LP is a case of "you-know-it-when-you-hear-it" and its label, Wharf Cat, is home to the more progressive and experimental side of the punk genre.

Chicano Batman
8 p.m. The Firebird, 2706 Olive Street. $12-$15. 314-535-0353.
By Roy Kasten
Aside from having one of the best names in the over-wrought history of indie rock, Chicano Batman also has one of the best aesthetic sensibilities of any band to make the Coachella shortlist. The Los Angeles-based quartet chops and screws with tropicalia sounds, building luxurious, rhythmically rich Latin soundscapes without ever forcing the psychedelic trip. The band’s latest album, Freedom Is Free, really does come as advertised. With distorted wah-wah guitars, skittering percussion and deliciously phrased Spanish lyrics – the band could eat for a week on the way lead singer Bardo Martinez rolls his “R’s” – Chicano Batman never plays the barrio funk too earnestly or too cooly. If these dark knights respond to any signal, it’s this: a groove that’s as free as it is fresco.

Gaslight Collective Release Party w/ Brother Lee and the Leather Jackals, 4th City Rag, Miss Molly Simms, Cara Louise Band
8 p.m. The Ready Room, 4195 Manchester Avenue. $12. 314-833-3929.
By Christian Schaeffer
From For Gaslight, a Year in Business Means a 5-Album Release Show:
But as the venue celebrates its first anniversary this spring, Anderson is ready to launch his next project: a record label under the Gaslight Studio aegis. And rather than starting small, the label will release five new albums — all recorded at Gaslight — on the same day. The initial roster comprises Miss Molly Simms, the Cara Louise Band, 4th City, Culprit Manifest and Brother Lee & the Leather Jackals. All will perform at the release show at the Ready Room on April 8.

Lo Fi Cherokee 2017
9 a.m. through 7:30 p.m. Cherokee Street. Free. Wrap party 8 p.m. Off Broadway, 3509 Lemp Avenue. $20. 314-773-3363.
By Christian Schaeffer
Bill Streeter’s ongoing Lo Fi Cherokee video series is like a progressive dinner party, but with fine local bands and day-drinking in the place of crudité and small talk. Streeter’s small army of videographers, sound engineers and cat-wranglers descend on a variety of spaces along Cherokee – some venues, some bars and some storefronts – for an immersive, one-off experience that marries sight, sound and space. This year’s lineup includes Super Hero Killer, Auset Music Project, Mt. Thelonious and quite a few more – full details are at lofistl.com – and the night wraps up a few blocks south of Cherokee at Off Broadway with an evening set by local legends the Bottle Rockets.

Mother Meat
11 p.m. Mangia Italiano, 3145 South Grand Boulevard. Free. 314-664-8585.
Besides its typical set of progressive-punk rippers, Mother Meat also has a softer side that is no less playful. On this night, the trio makes use of toy instruments and found objects to help explore its range of nuanced songs. The musical marathon starts at 11 p.m. and is slated to run right up until closing time at 3 a.m. That means four hours of music that gradually increases in volume and density as the show goes on. If ever you wanted a primer on one of St. Louis' young, unsung and just plain strange bands, this here's a no brainer.

Rocking Under the Radar Music Festival w/ Brian Andrew Marek, Keokuk, Soma Jet Set, Mariner 5, The Deciders, Nick Barbieri, Rough Shop, Diesel Island, The Lettuce Heads, Accelerando
12 p.m. The Bootleg 4140 Manchester Avenue. $7-$10. 314-775-0775.
We at RFT Music will be the first to admit that we don't have enough ears, eyes or the other necessary appendages to fully cover all the great music St. Louis has to offer. Drummer Nick Barbieri is all too familiar with local media's blind spots and has amassed an all-day festival in an effort to highlight the unsung talent in direct response. Music fans and writers alike would do well to take notes.