Here are the Details for Chuck Berry's Funeral 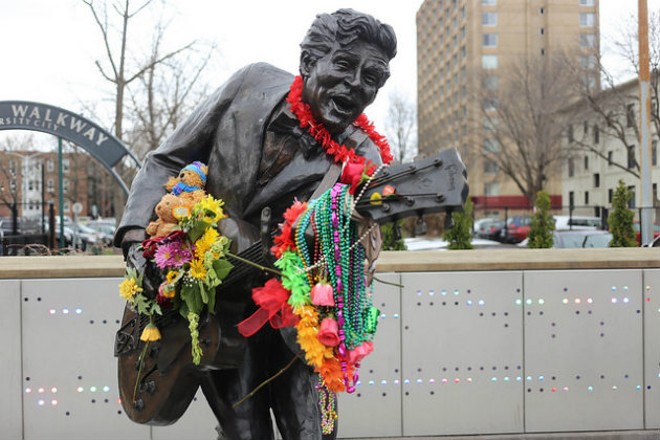 Members of the public can begin lining up at 5 a.m. Sunday, April 9, for the public viewing, which will begin at the Pageant at 8 a.m. The guest line will be cut off at 11:30 a.m., and the viewing will end at noon.

Following will be a "Celebration of Life Ceremony" and the procession to the cemetery, which are reserved for the musician's family and friends.

In lieu of flowers, Berry's family requests that donations be made to the Charles F. and Joanne Knight Alzheimer's Disease Research Center, the Lewy Body Dementia Association,The Arthritis Foundation, The Charles and Themetta Berry Endowment at Lindenwood University, Thurgood Marshall College Fund, The Arts and Education Council of Greater St. Louis or MusiCares.

Blueberry Hill owner Joe Edwards and Mayor Francis Slay also announced today that there will be a city-wide toast to the rock and roll legend at 10 p.m. Saturday. The public is encouraged to start gathering at Blueberry Hill at 9 p.m. to pay tribute to Berry, though people everywhere are encouraged to raise their glass at 10 p.m. in honor of the rock and roll legend.

“Chuck Berry paved the way for rock and roll, and his legacy will carry on for generations to come,” Edwards said in a statement. “I am indeed grateful to be celebrating my friend's life with fellow friends, family members and fans from all over the world. May his inspiration continue and his influential tunes be forever remembered.”

Final updates of this weekend's timeline will be released on Friday.