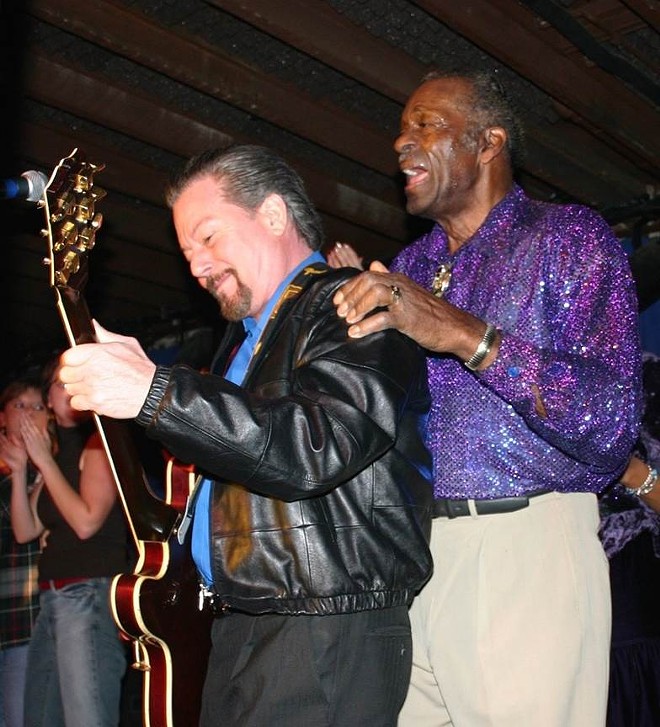 Chuck Berry is gone but his musical legacy will go on infinitely, the Voyager spacecraft ferrying Berry's "Johnny B. Goode" into interstellar space forever. But here on earth, we got hockey games to play.

The St. Louis Blues host the Vancouver Canucks at Scottrade Center (1401 Clark Ave., www.stlblues.com) at 7 p.m. on Thursday, March 23. During the first period, St. Louis native and Chuck Berry disciple Billy Peek will pay tribute to his mentor and friend the only way he knows how: by playing one of Berry's songs for the crowd.

Peek will set up in Pepsi Plaza on the mezzanine concourse, between sections 326 and 331. When the game pauses for a media break Blues' PA announcer Tom Calhoun will introduce Peek, and then Peek will let 'er rip.

Scottrade Center marketing manager Emilee Murphree believes this in-game musical salute might be a first for the Blues. "If we've done anything like this before I'm not aware — but it doesn't mean we haven't," she explains in an email.

Peek played with Berry on a number of tours during the early '70s, thanks to the film American Graffiti setting off a wave of nostalgia for the unfettered sounds of rock's pioneers.

But Berry was no nostalgia act. Still in fighting trim at 47, he and Peek whipped crowds into a joyful frenzy with their stinging guitar work, as you can see in footage from a 1975 show in Santa Monica. Peek steps up to sing lead and play on Creedence Clearwater Revival's "It Came Out of the Sky."

Watch that video below, and don't forget to set your DVRs for Thursday's tribute: