"We wouldn't have this festival without Chuck Berry," Gallo said after dedicating the opening song to him. "We wouldn't have any of these bands." An impromptu cover of "Too Much Monkey Business" would have been too much to ask, even if Gallo knew it by heart, which he probably does. His set wound up weird and scathing and reckless with noisy garage rock; it was redeemed by wit and sweetness and inspiration. If there were a few Chuck Berry licks somewhere sublimated in the deconstruction and destruction, you couldn't really hear them. But like DNA they were there defining everything.

As it turned out, more than a few Saturday night showcasers honored Chuck. (The list does not include Garth Brooks, who covered Billy Joel instead.) As reported by Yahoo Music, Hanson rocked "Johnny B. Goode," the Mystery Lights dedicated its Burgermania (as in punk-garage label Burger Records) set to "the King of Rock & Roll," and the Roots and the Waco Brothers also tackled JBG, while C.C. Adcock played "Promised Land" at Antone's.

Even Gurr, a young German surf-pop band I caught at Swan Dive on Saturday night, acknowledged Berry. "This is a song by a band that was really influenced by Chuck Berry," said lead singer Andreya Casablanca. "Us!" She was kidding, but the band wasn't as they raged through "Helter Skelter" for its closing number. 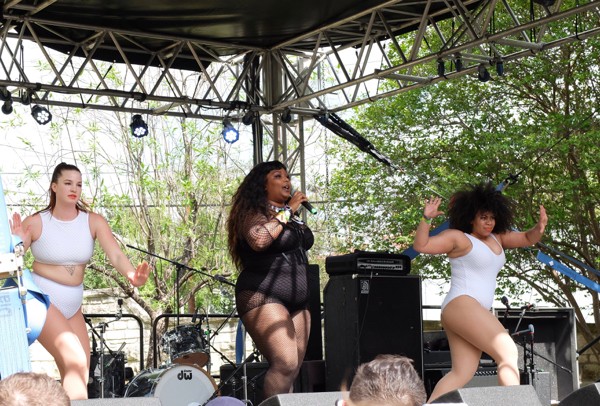 My last two days of SXSW 2017 swung between the stunning and the insensate, deliriously great discoveries and disappointments, without which South By would not be South By. To get the latter out of the way, the Friday afternoon Pitchfork party on the splendid grounds of the French Legation Museum presented dozens of bands it's hard to imagine anyone will remember ten or even five years from now. This goes for one of South By's most hyped acts, Cherry Glazerr, who squalled and shrieked through proto-Melvins-esque punk, which is all right enough, but it was hard for me to hear just what distinguishes Clementine Creevy and company from the thousand other underground noisemakers goofing off at basement parties from coast to coast. Better but still novelty-riddled hip-hop funk mistress Lizzo twerked and wailed about losing her iPhone and pretentious-doesn't-even-cover-it Anna Meredith pounded drums and art-rocked a tuba. I had more fun watching Zaytoven and his crew lead a mini trap-music dance party on the side stage. 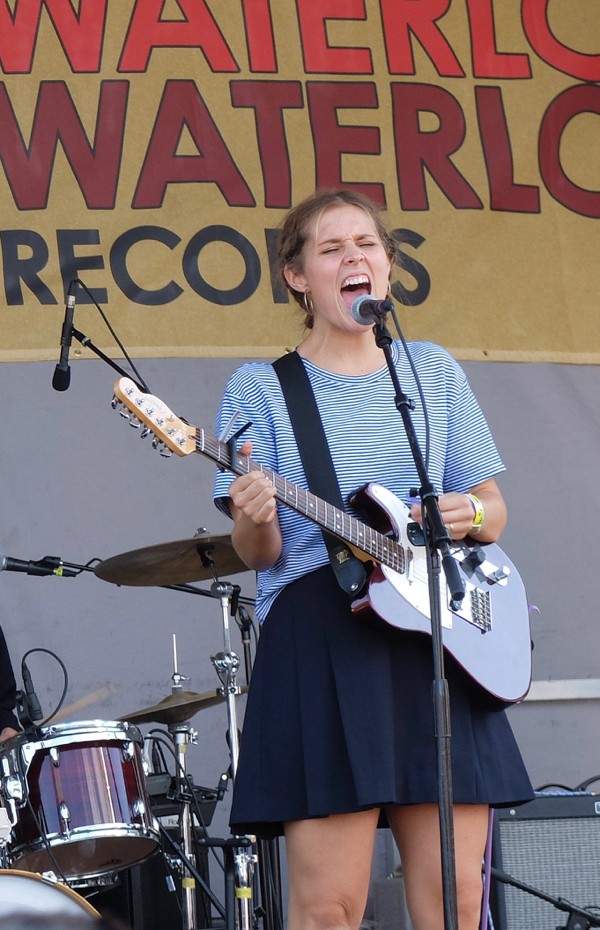 Slotted just before Spoon at the Waterloo Records Friday day party, Middle Kids, from Sydney, Australia, were just the tonic for the post-Pitchfork blues. Singer Hannah Joy has deceptive charisma and the band's excellent singles "Your Love" and "Edge of Town" shine with grungy pop. Just when you think they'll get too twee for their own brand of rock, Joy absolutely wails. The band has only one EP to its name, but keep your eye on these Aussies. They're pretty special.

On Friday evening I showed up early for the Music From Ireland showcase at the small Velveeta Room on 6th Street, which featured songwriter A.S. Fanning. Originally from Dublin, Fanning has a wry and rich baritone, a fascination with American musical history and myth, from Warren Zevon to Louis Armstrong, and a way of making straight-ahead songwriter rock & roll sound fresh and revealing. In a South By crowded with bands and supposed songwriters who treat their lyrical and melodic craft as an afterthought, it was really good to be reminded of the real deal.

Speaking of which: Benjamin Booker. I caught the 27-year-old New Orleans native at an outdoor brewhouse in the Rainey District, after a set by Annie Hart (formerly of Au Revoir Simone) at the Clive Bar (a moving cover of the Mountain Goats' "California Song" was a highlight). Booker and his band churned through a set that was all about rock & roll rhythm, fuzz bass and unforced charisma. As a singer, Booker lacks range, but his gravely moan cuts through everything. Just about everybody on the packed patio was dancing; their bodies had no choice. 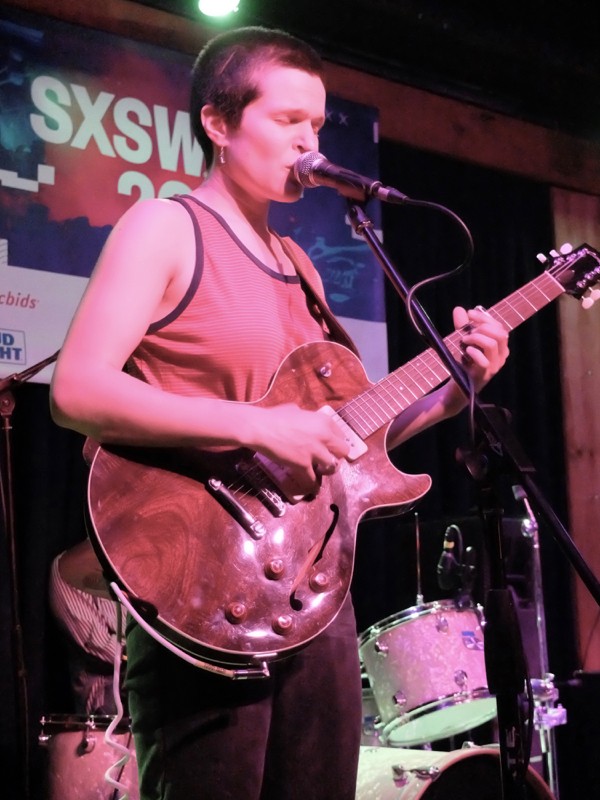 Back in the heart of downtown Austin, Brooklyn's Big Thief, led by songwriter Adrianne Lenker, spread out across the indoor Barracuda stage, as if no member of the four piece knew what to make of anyone else, themselves included. But the songs, lonely and lost, sparkling with melodic craft ("Masterpiece" is as good as any indie-pop song I've heard this decade), were absolutely inviting. The band was scheduled to play St. Louis this past winter; an ice storm nixed the show. Don't miss it when and if it returns.

My Friday night ended with Dream Wife, whose hooks helped distinguish itself from the dozens of other punkish sex-appealers, and the Wild Reeds, whose country-rich harmonies were almost enough to revive my spirits at 1 a.m. Featuring a trio of singers, the Wild Reeds are working hard on original material, but perhaps too hard. A little more Chuck Berry economy would have been welcome. 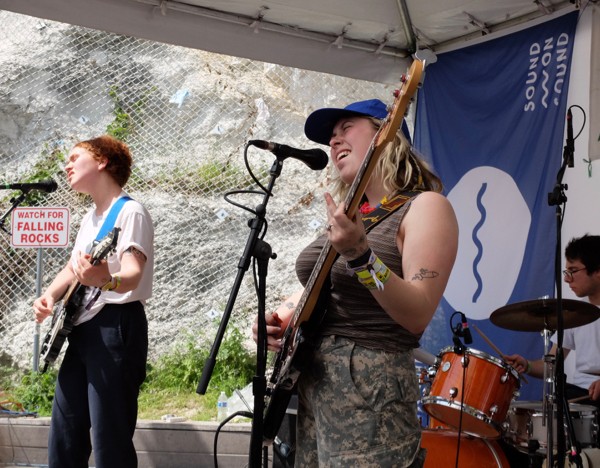 On Saturday afternoon, at the Brooklyn Vegan party at Cheer Up Charlies, I'd hoped to catch all of Girlpool's set. I didn't, but the three songs I heard were sweetly harmonized and more lively than any band's final and exhausted South By set should be. Alex Lahey, from Melbourne, Australia, followed on the inside stage, and while she's been favorably if unfairly compared to Courtney Barnett, I didn't hear it. The songs were good, but only good, and Lahey hasn't quite found her own rock & roll voice or presence. Afterwards I trekked over to the east side of Austin for a set from Christopher Paul Stelling at Licha's Cantina. The Daytona, Florida native sounded completely wiped out from his South By schedule, and he let his ace fiddle player carry the tunes. But fans of Scott H. Biram or Shakey Graves would do well to check out his bluesy Americana work.

I had high hopes for Sarah Bethe Nelson at the Burger Records showcase at Hotel Vegas on Saturday night. Her album "Fast-Moving Clouds" is a fetching batch of dreamy slo-core songs, but Nelson's mannequin like diffidence and mid-tempo groove left me cold. And while my French is fairly ossified, I found myself more engaged by Laure Briard from Toulouse, France, and her band's quirky and lovely synth pop. The recent single "Dreams" sounded brilliant on the outdoor stage. 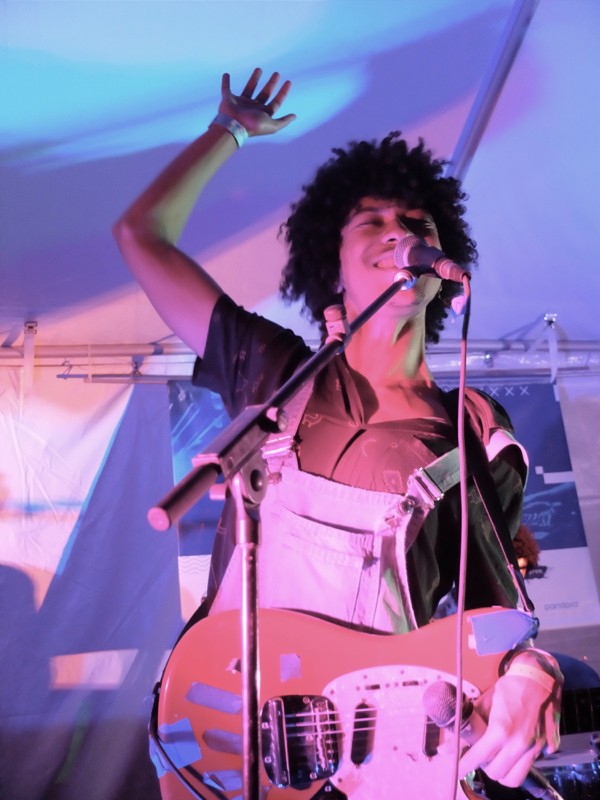 Hailing from Goiânia, Brazil, Boogarins was the band I'd come to see at Hotel Vegas. Formed by Dinho Almeida and Benke Ferraz just four years ago, the group has become an obsession for psychedelic-rock followers. Driven by furious and unflagging drummer Ynaiã Benthroldo, it blasted through a short set that ended with a hypnotic, sizzling, fifteen-minute plus jam, during which Almeida dropped his guitar and just howled and howled through the feedback and wave upon wave of reverb. It wasn't rock & roll but it was mind-melting.

My hopes of hearing one honest-to-rock-&-roll Chuck Berry cover on Saturday were finally dashed by the Nude Party, a surf-psych band from Boone, North Carolina. I wouldn't hold it against these six young dudes, as the set was one of the sweetest surprises of my SXSW 2017. Hooky, grooving, tight and unpretentious, this band with the silly name hailed and hailed rock & roll. Like the best of the acts in Austin this week, it motorvated when we needed it most.