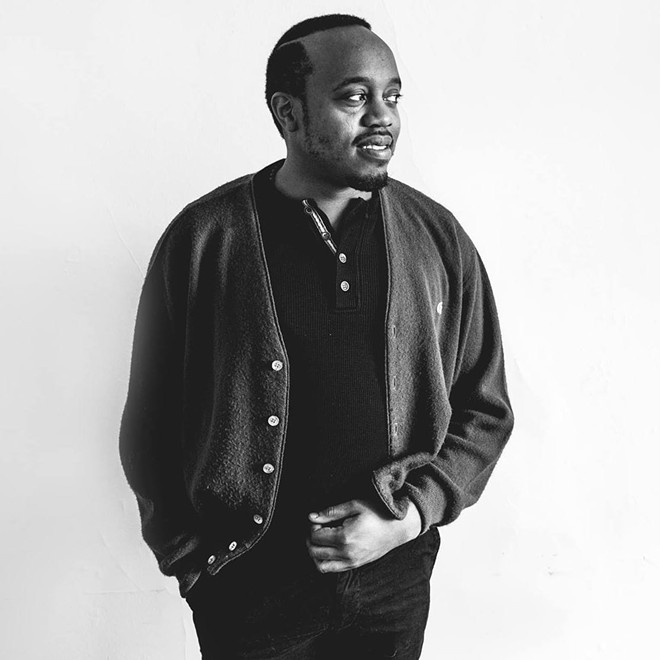 More like South by South City, am I right? As bands buzz through St. Louis coming to and from Austin, Texas, for SXSW, music fans are burdened with which show to skip because staying in isn't even an option. From emerging bands such as Lady Pills and Datenight to the established Gringo Star and JEFF the Brotherhood to the legendary Dinosaur Jr and Son Volt, St. Louis has every manner of rock and roll on deck for the weekend ahead.

Lady Pills w/ Dubb Nubb, The Goes, Two Souls
9 p.m. Foam, 3359 South Jefferson. $5. 314-772-2100.
Lady Pills hails from Boston, more specifically the Allston neighborhood, where basements and punk houses get just as cramped as the city's bigger concert venues. With its close proximity to New York and a constant influx of college students, the scene oozes quality and it's to Lady Pills' credit that the band shines through with its distinct and unabashed approach to the pop-rock formula.

Datenight w/ Ish, The Chair Enthusiasts
9 p.m. Schlafly Tap Room, 2100 Locust Street. Free. 314-241-2337.
It's hard to tell if Datenight's latest release Sonic Youth 18 Years On Earth is self-referential or if the Nashville trio means to poke fun at the recent uptick in bands who maybe take a little too much influence from Sonic Youth. Either way, the group's own brand of straight up punk rock skews on the pop side of the tracks while maintaining a harsh, stringent edge. The Chair Enthusiasts open the night with a homecoming show after spending the last week on tour through the midwest.

Durand Jones & The Indications w/ Looprat
8 p.m. The Bootleg, 4140 Manchester Avenue. $10-$13. 314-775-0775.
Considering the fact that soul sensation Durand Jones and company just played a sold out show at the Empty Bottle in Chicago roughly two weeks ago, concertgoers hoping to attend this event should arrive on time. If actually getting in the door wasn't motivation enough, openers Looprat will perform with special guest and local jazzman Stanley Coleman.

Gringo Star w/ The Golden Fleece, Shitstorm, Subtropolis
9 p.m. The Sinkhole, 7423 South Broadway. $5.
When Gringo Star broke out in the late aughts, the Atlanta band instantly grabbed the kind of accolades (through Pitchfork, PopMatters) that typically come after years in the game. Sure the name might turn a few heads sideways, but the band's pop-sensible riffs sit inside of solid songs that peter out before wearing out their welcome. The group's prolific nature (4 albums and 3 EPs counting) coupled with its tendency to tour relentlessly makes it a well-oiled rock machine, and the local lineup with Shitstorm pairs perfectly.

JEFF The Brotherhood w/ Middle Class Fashion, The Death
8 p.m. Off Broadway, 3509 Lemp Avenue. $15. 314-773-3363.
As recently as 2010, the brotherhood of JEFF would play smaller spaces in St. Louis. One such venue was a now-defunct art gallery run out of a garage in Lafayette Square, so recent fans can imagine the ennui old diehards might have from seeing a band once known for playing more intimate spaces now in larger venues. Yet the raucous rock duo treats every stage with an equal level of ferocity, transforming bigger barroom floors into a personal realm of rock and roll.

Rise & Scream 2017 w/ Seashine, CaveofswordS, Hylidae, Giant Monsters On The Horizon, Joan of Dark, Cassie Morgan, Paperkite, Town Cars, Procog, Suzie Cue, Exotic Rhythms Bellydance, Solid State Disaster, Finel Veil, Eric Ketzer, Not Quite Nothing, Brian Sowinski, Dear Genre, Baby Baby Dance With Me, Zafira String Quartet
3 p.m. 2720 Cherokee. $10. 314-276-2700.
If nearly twenty acts spread across hip-hop, pop, rock, chiptunes and other genres backed up by performance artists doesn't separate you from a hard earned $10 bill, consider the cause for this one day festival. All the performers listed above will play for free to the benefit of International Institute of St. Louis, an organization whose stated mission is to "help immigrants and their families become productive Americans and champion ethnic diversity as a cultural and economic strength."

Son Volt
8 p.m. The Pageant, 6161 Delmar Boulevard. $22-$25. 314-726-6161.
By Mike Seely
From At 50, Jay Farrar of Son Volt Just Wants to Sing the Blues:
Now 50 with teenage kids and a tee time on life's back nine, Farrar tries on that persona of a seasoned St. Louis bluesman on Son Volt's latest album, Notes of Blue. In its stringent simplicity, the ten-song LP bravely diverges from the band's prior oeuvre, which was instrumental in pinning down the previously elusive Americana genre, insofar as it can be pinned down.

Dinosaur Jr.
8 p.m. Delmar Hall, 6133 Delmar Boulevard. $25-$28. 314-726-6161.
By Jaime Lees
From Alt-Rock Royalty Dinosaur Jr Refuses to Go Extinct:
Though Dinosaur Jr is hailed by fans as one of the all-time greatest acts tied to the “alternative rock” movement, it never achieved proper mainstream success. Founded in Amherst, Massachusetts, in decidedly pre-grunge 1984, Dinosaur Jr toiled for years on the edges of the local punk scene: too out there for most people to comprehend and too weird to really fit in anywhere else.

Electric Six w/ Residual Kid
8 p.m. Blueberry Hill - The Duck Room, 6504 Delmar Boulevard. $15. 314-727-4444.
Electric Six is an old Riverfront Times favorite. We highlight the band almost every time it graces the river city, but this show is most notable for opening act Residual Kid. The band is a live workshop in '90s rock worship conducted by teenagers not even old enough to have lived through grunge's heyday. Not that there's anything wrong with circular trends, especially when they turn out groups who do them justice, but Residual Kid nails the kind of rough-edged indie rock that 10,000 other bands strive for. Plus, the band has already toured Europe. What have you done with your life?

Weedeater w/ The Gorge, The Maness Brothers
7 p.m. Fubar, 3108 Locust Street. $15-$18. 314-289-9050.
By Daniel Hill
Some things just go together. Peanut butter and jelly. Jeans and t-shirts. Green eggs and ham. It gets to a point where you can't think of one without your mind immediately conjuring the other. (Seriously, when was the last time you ate ham-less green eggs? That would be crazy.) So it goes with Weedeater and copious amounts of marijuana. That's no coincidence — the Wilmington, North Carolina-based act frequently features pot-centric lyrical themes and even refers to its sound as "weed metal." Thick, fuzzy as fuck and heavier than a dump truck full of anvils, Weedeater's music is best enjoyed with a head full of smoke and a sound system loud enough to burst your eardrums. Fubar's should do nicely.