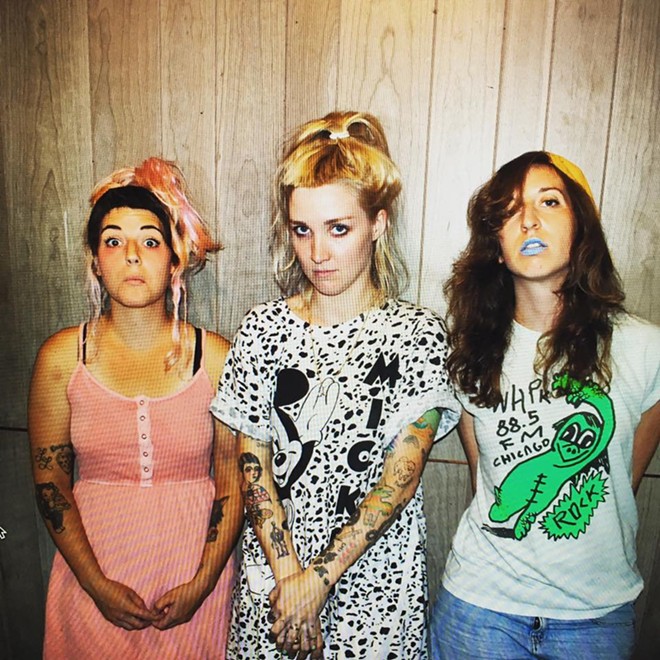 From the smaller stages of Foam and Blank Space on Cherokee Street to Delmar Hall and the Duck Room in the Loop, the next few days abound with bands both on and off of the mainstream radar. Cree Rider Family Band celebrates the release of its third studio effort on Friday while punk bands come from all corners of the community to help one of their own on Saturday.

Doublin Down No.15 w/ Proh Mic, Jone$, Hal Greens, Mister Melvin
9 p.m. Blank Space, 2847 Cherokee Street. $5. 314-669-9240.
Proh Mic hails from Seattle, a city that just made headlines for having only three sunny days since last October. Maybe the lack of sunlight makes this producer feel more at home in a venue like Blank Space's basement, where the walls are painted jet black and the bass has nowhere to go but into your bones. Resident DJs Mister Melvin and Hal Greens should keep this edition of Doublin Down locked into a groove well into the late night.

El Ten Eleven
8 p.m. The Firebird, 2706 Olive Street. $12-$15. 314-535-0353.
The bog-standard rock duo is somewhat taken for granted, what with the tried-and-true pairing of guitar and drums running amok all over the mainstream and indie scenes alike. El Ten Eleven occupies the kind of head space a young musician might be in when walking into a music store or pawn shop for the first time. By implementing a double-necked guitar and a pedal board fit to fly a spaceship, Kristian Dunn and Tim Fogarty craft dense songs that build in real-time through clever looping and a blend of electronic and acoustic drums. This band is an audible sugar rush for your ears to gorge on.

Gymshorts w/ Rick Steves, Maximum Effort
9 p.m. RKDE (2nd floor of 2720), 2720 Cherokee Street. $7.
The party punkers in Gymshorts have a music pedigree that extends to the noisier parts of the Providence, Rhode Island scene (made somewhat famous by LOAD Records and Lightning Bolt), yet its infectious songs sit firmly in garage rock territory. The cover for last year's WET WILLY shows a finger jammed right through a head in graphic fashion — that might be the best depiction of the band's sound. See for yourself.

Mickey Avalon
8 p.m. Delmar Hall, 6133 Delmar Boulevard. $20-$23. 314-726-6161.
Mickey Avalon's ascent as the pungent, foul-mouthed rapper from Hollywood was aided by none other than MTV VJ Dirt Nasty with a little help from MySpace's now-defunct record label. Armed with those facts alone (and a little imagination), one could piece together Avalon's general vibe without hearing a single song. But that would be doing yourself a grave disservice. For fans of Harmony Korine's Spring Breakers, commercials for the '90s soda Surge and tattoos of Bob Marley.

Nikki Lane
8 p.m. Off Broadway, 3509 Lemp Avenue. $15-$45. 314-773-3363.
By Roy Kasten
The field of fast-toking, quick-witted, crazy-but-not-too-crazy country chanteuses may be getting crowded, but there damn well better be room for the likes of Nikki Lane. As if to put some space between herself and the formidable likes of Margo Price and Kacey Musgraves, the Nashville-based singer uses her sex appeal like she uses her voice: Her unvarnished twang, strung out on smoke and memories, is exquisitely dirty and poignant at once. Lane’s latest album Highway Queen highlights the independence of that voice and her growing skill with country archetypes. In these songs forever truly lasts forever, honky-tonk frauds get their comeuppance and foolish hearts somehow find their own way in a foolish world.

Centipede w/ Francis, Ben Ricketts, A Leaf in the Street
9 p.m. Way Out Club, 2525 South Jefferson Avenue. $5. 314-664-7638.
In plain fashion, this show depicts the Way Out Club's recent shift in booking policy. Diverse lineups focused on touring acts (Ben Ricketts hails from Oxford, Mississippi) and a soft entry fee of five dollars (encouraged but not required) give the bar a more communal vibe without compromising on the music. Centipede's cybernetic soul mingles with the pop odyssey of A Leaf in the Street while Francis Maness offers up anti-folk to help weave a web of local support.

Heavy Dreams w/ Mess, Dubb Nubb, Babe Lords, Ex Oh Ex
9 p.m. Foam, 3359 South Jefferson Avenue. $5. 314-772-2100.
The ladies behind Heavy Dreams build songs with enormity befitting the noisiest of shoegazing rock bands. Emily Kempf, Sarah Quillin and Jessica Famighetti manage to coalesce a huge sound over essential pop riffs, careful not to obscure the gems that hide just out of plain sight. This event is just one of many upcoming shows put together by Weepy Vision, an all-new, all-local production company that can be followed on Facebook.

Phil Fest w/ Headed to the Mud, Banjo Rat, Humanoids, Cross Examination
6 p.m. The Firebird, 2706 Olive Street. $10. 314-535-0353.
Gary Phillips, the brains behind the Motion Sickness Fanzine and the vocalist of Whoppers Taste Good, faces a mountain of medical expenses. Fortunately, St. Louis punk takes care of its own and a rippin' lineup of locals will help bear the brunt of his bills. Head over to the GoFundMe page to donate directly.

Slothrust w/ And the Kids
8 p.m. The Duck Room at Blueberry Hill, 6504 Delmar Boulevard. $12. 314-727-4444.
By Christian Schaeffer
Bad phonetics should never get in the way of good rock & roll, but Slothrust has us asking the big questions: Is it pronounced “slow thrust” or “sloth rust”? The first option seems best, due in part to the ragged, thrusting sensuality of the trio’s pop-punk nuggets and the tender, slow-burning moments that are burnished in shades of red and blue. Singer and guitarist Leah Wellbaum can be both forceful and bruised, and the band’s simple guitar/bass/drums format makes for a direct pathway into your skull. Last year’s Everyone Else will certainly scratch your mid-’90s guitar-rock itch, but these songs sink in deeper than mere nostalgia.