Now Jamming with the Urge's Steve Ewing: A Bunch of Kids Too Young to Drive

The future generation of rhythm and blues is in good hands — and they're young enough to still be in school.

Every week, under the direction of founder Joe Pastor, the St. Louis Legacy Ensemble, which includes kids ages ten to eighteen, rehearses and jams on stage with some of St. Louis’ best professional musicians.

This Tuesday is no different. Starting at 6:30 p.m. tomorrow, February 21, the Ensemble will play its first "Legacy Jam" with St. Louis’ very own Steve Ewing of the Urge at BB’s Jazz, Blues and Soups (700 S Broadway).

Other programs teach kids jazz, Pastor says. But very few, if any, teach them the blues, much less funk or soul.

"I teach jazz, I love jazz. Nothing against jazz," Pastor says. "I don’t see much education for funk, soul and blues. I learned that by experience — I was in college, I started playing those kind of gigs ... a bunch of stuff they didn’t teach me in school, I learned on the gigs. I’m trying to provide that for them as well."

A veteran musician and educator, Pastor says his vision for the Legacy Ensemble is to ensure that the future musicians of St. Louis get real-world experience with professionals. The program enlists local musicians to mentor, instruct and perform with the students. In the past, the Ensemble has worked with Gus Thornton, Brian Casserly and Ron Carr, to name a few.

At Tuesday night’s concert — the Ensemble’s first this year — Ewing will conduct a clinic with the students, and talk about his musical process. The students will then perform with Ewing on some of the Urge’s famous songs, including "Closer" and "Hectic."

Afterward, the Ensemble will perform a set of their standard material. At previous performances, they’ve paid homage to Tina Turner, Chuck Berry, Oliver Sain and Miles Davis, in addition to their own original songs.

If that sounds intimidating, Pastor says the Ensemble students have a great support system in the professionals and older players. “It works really well — in [our Ensemble] you have a professional in every corner of the stage. No matter what happens, there’s someone nearby who can help you out,” he says. “Kids might get nervous, like we all did when we were young, but [seeing] those of us here with experience…we can guide them through it. It’s the best part.”

Pastor founded the program, which has operated for almost five years, after seeing a percussion ensemble composed of new and intermediate students. He could tell they were nervous, he says.

"Not that they sounded bad, they sounded great, but you could see that there was one guy in charge, and some people seemed like they were pretty new or intermediate players," he says. "I thought, 'Wouldn’t it be cool to do something like that, except instead of all percussion, you have the whole band like I’m thinking about, with students.'"

Blake Mickens, a high school student and one of Pastor's bassists, is enthusiastic about Legacy and their upcoming performance.

"Before Legacy, I couldn't solo over much other than a pentatonic or Major scale, because, I mean, bass players don't solo so why should I learn?" Mickens says. "After being in Legacy, I've gotten comfortable playing much harder tunes. .... For me to be able to play with amazing professional musicians and people my own age who are just as passionate about music is seriously amazing."

Of Tuesday's collaboration with Ewing, he says, "This show is the most excited I've been for a show with Legacy. I've been a big fan of the Urge for several years, and to be able to play with one of my idols is really humbling."

Admission to Tuesday's show is $10. Proceeds will benefit the St. Louis Legacy Ensemble. 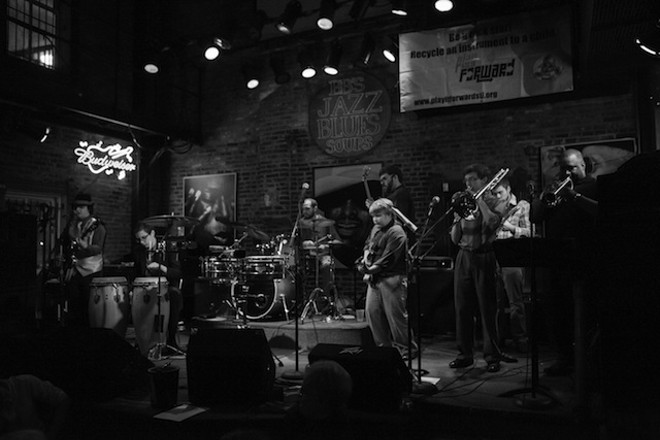