Oh Thank God, Nickelback and Kiefer Sutherland Are Coming to Save Us

In these times of great social and geo-political uncertainty it can be easy to fall into hopelessness, a state of misanthropic ennui, as the world increasingly looks like the first act of a movie based on a comic book. Where are our heroes? Who can save Gotham? Who can save America? More importantly, who can save St. Louis?

The answer is finally here: Kiefer Fucking Sutherland, of course, along with the aid of Nickelback. Canada is sending its finest stars down here to rescue us from ourselves. Sutherland, who plays music now, will perform at Fubar on May 20; Nickelback plays at Hollywood Casino Amphitheatre on July 25.

Sutherland is perhaps best known for his work as Agent Jack Bauer on the Fox television program 24. I'm not particularly familiar with the show, but from what I understand Bauer is an American super-soldier of sorts who employs near-constant torture against enemies of the Republic to keep us safe from tyranny. He is more than willing to sacrifice his friends, wife, girlfriends, bosses, dogs, pet goldfish, sea monkeys — whatever it takes to get the job done. His penis leaves drag marks on the ground behind him as he walks; it is also red, white and blue in color.

Sutherland himself, meanwhile, is an unrepentant fan of alcohol who once tackled the shit out of a Christmas tree that looked at him funny. This is a man we need on our side.


And if there are any untackled conifers or untortured enemies of the state left over after Agent Jack Sutherland is through with St. Louis, the cavalry — a.k.a. Nickelback — will surely take care of them.

Most people know Nickelback only for its terrible, unlistenable, unbearable music, which is torture in and of itself. Hating them is a cliche at this point, a given. What people forget about is the band's devastating political acumen.

Take, for example, Nickelback's response to the unrest in Ferguson. In November 2014, the band released a track called "Edge of a Revolution." Singer Chad Kroeger explained the track's origin to Yahoo! Music:


I don't know if North America is on the edge of a revolution, but I wanted it to feel that way in the song, since it feels that way in so many other parts of the world. You turn on CNN and it's like, "Wow!" We'd have it on for 15 minutes and we'd have to shut it off because it was so depressing. The state of affairs in the world these days is so dismal. And I think that's where the song definitely came from. While we were working, the [shooting of Michael Brown in Ferguson, Missouri] was a major story and there was rioting like crazy. So it definitely felt like the seeds of revolution were being planted.


Like "Wow!" indeed. Need more? Look at this photograph: 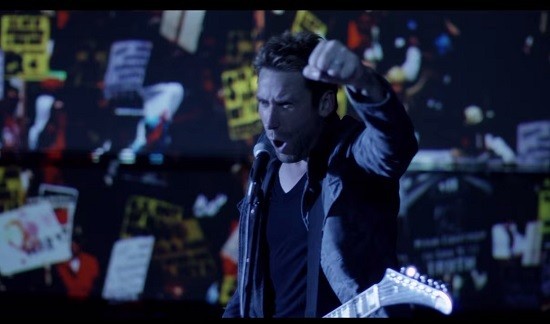 That's Kroeger, fist raised in defiance, backed by a sea of sign-carrying protesters. A true revolutionary if ever there's been one.

And as if that wasn't enough, the 'Back (I still like to call these guys "the 'Back") just dropped another wrench in the gears of the system with this week's just-released new track, "Feed the Machine," featuring riffs so heavy that Metal Injection's Greg Kennelty even wrote, "Tell me that at the very least the riffs aren't the worst thing ever." A commenter on Kennelty's story, Kirk, added that he'd known "since Chad broke up with Avril then this album would be heavier and more aggressive." (Another commenter, named Cattle The Cock Sucker, wrote, "You have taste of an asshole.")

So thank you, Canadian Prime Minister, for sending us your nation's finest warriors in our time of turmoil. Trump may have barred the refugees, and that wall will ensure no revolutionary mariachi music makes it to our ears anytime soon, but Canada has got this.

The machine doesn't stand a chance.