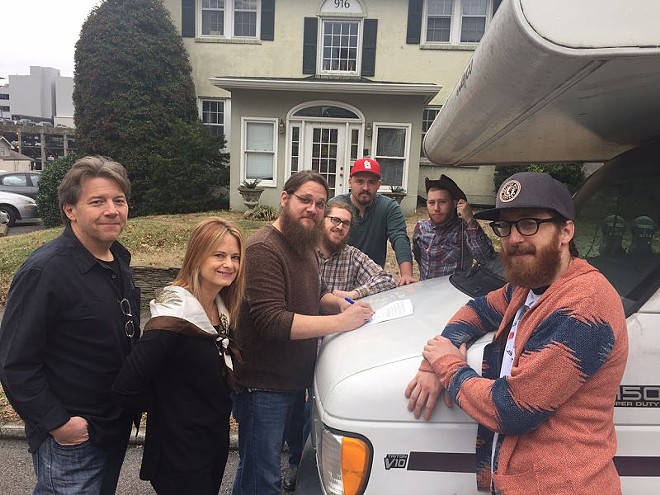 Belleville, Illinois's Old Salt Union has signed a deal with Nashville's Compass Records, home of artists including the Infamous Stringdusters, the Proclaimers and the HillBenders.

The band signed the deal while on the road, in the midst of a non-stop touring schedule that began when the group was formed in 2012.

"For the past five years we've handled everything on our own. Marketing, PR, distribution, printing, designing, publishing, etc.," upright bassist Jesse Farrar tells RFT Music. "It's been a long, tough road juggling all of those things while traveling the country full-time and having to find the time to be creative and keep Old Salt Union fun and interesting for us as artists. But now with Compass having our back, it relieves a little pressure in those departments and we can have a clearer vision on the music. It's nice to know that they'll be in our corner fighting for us."

The Americana outfit's tireless work ethic is what caught the label's attention in the first place. According to a press release, Compass co-founder Garry West was instantly impressed the very first time he saw Old Salt Union perform.

"I’ve never seen a string band turn a roots music festival into a rave until I witnessed Old Salt Union live!" West writes in a statement. "This is a band that knows how to please a crowd and they are inventive, spirited players to boot. We are proud to be associated with them and look forward to introducing their music to fans far and wide."

Old Salt Union won first prize at the 2015 FreshGrass band contest in North Adams, Massachusetts — winning $5000 and a day of recording time at Compass' Sound Studio. Alison Brown, another of the label's co-founders, worked as producer on this session. She found the group easy to work with, displaying a natural chemistry. Brown decided they should combine their efforts in a more official manner.

“The guys came in with a new song and together we fleshed out an arrangement that borrowed inspiration equally from New Grass Revival and Fleet Foxes," Brown says. "I loved the band’s open-minded approach to recording as well as their enthusiasm for experimenting with new ideas. It was such a great day that it made perfect sense to think about how we could work together on a larger scale.”

That song will now appear on the band's upcoming Compass Records debut, to be announced later this year. In the meantime, get your Old Salt Union fix by streaming the band's 2016 EP, Cut & Run, below: